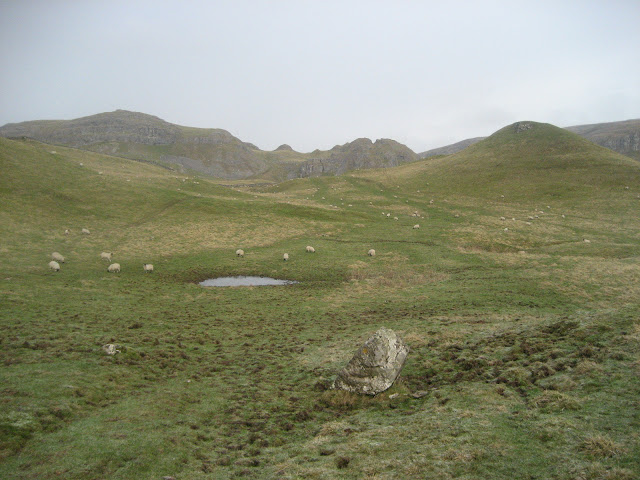 Hello Again!  Well, we've just had a nice long rest at the summit (the highest point up on the left of the photo above) so it's time to head off via the Citadel as the mist is on its way. 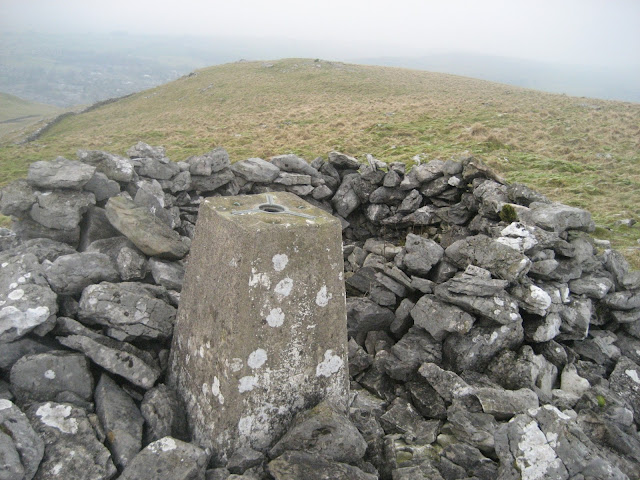 Besides - the rocks on the summit do get a bit bumpy on the bottom after a while.  If you are feeling fitter than me you can head along that grassy ridge in front for a bird's eye view of Settle - my favourite town in Britain. 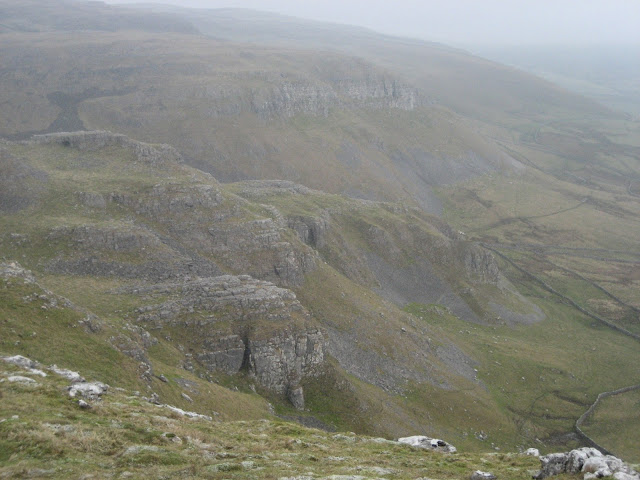 Our way on is down to the vicinity of that obvious dark gully in front (when you get there you will see it's not a cave).  The outcrop of limestone you can see - the 'Citadel' is well worth a detailed exploration, and if you look very carefully from here you can just see the Citadel Pinnacle - as I call it - down to the right of the gully. 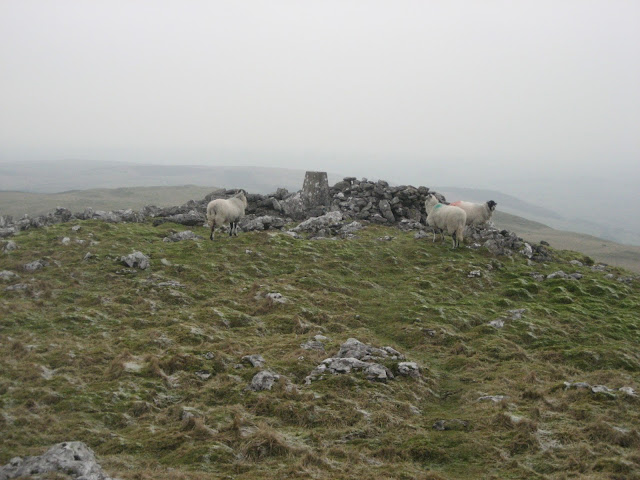 A last farewell to the woolly ones. Baaaaa Bye! 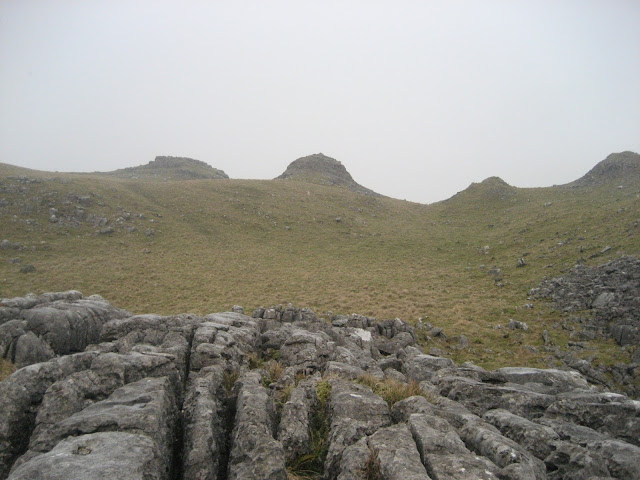 Once you have scrambled down onto the top of the Citadel you are back with this view of the Dome and its companions ... 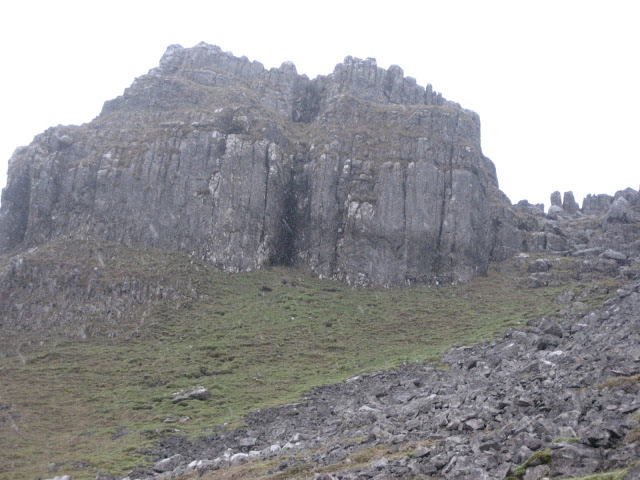 Heading down the scree reveals the Citadel in all its glory.  See the two isolated limestone men at the top right which guided my way down?  They are the Sentinels of course, guarding the Citadel.  I can carry on down the scree if I wish, but there's an hour of daylight left, so let's head back up to that enticing cave entrance for a few minutes ... 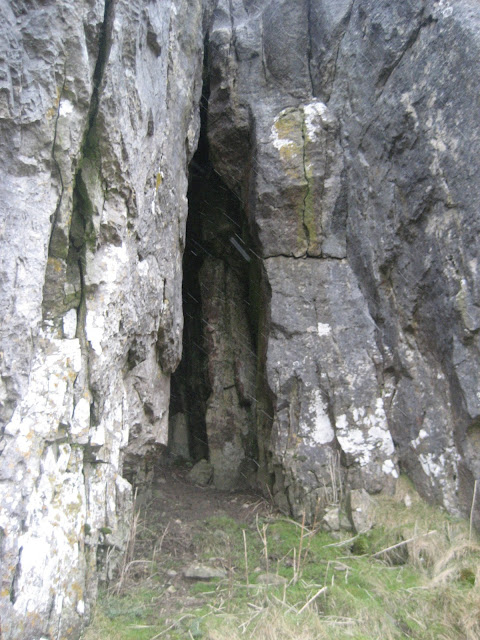 This is Raven's Cave, piecing the face of the Citadel and usually full of animal bones.  To this day, I don't know what that strange black object is in the centre???  It certainly wasn't there when I entered so could these ravens be capable of paranormal goings on???? 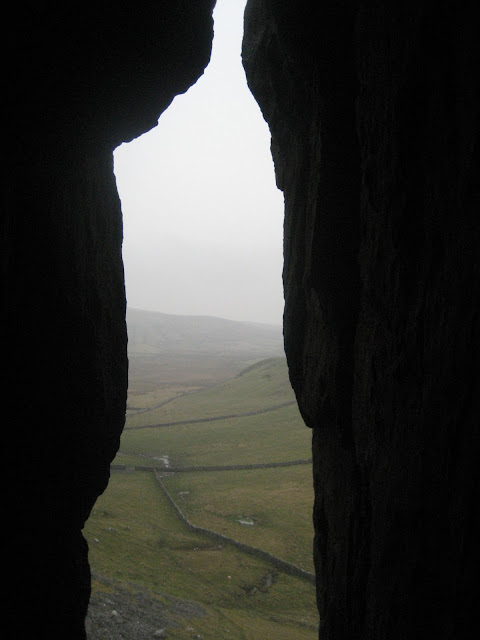 Anyway - the view out is worth the squeeze inside. 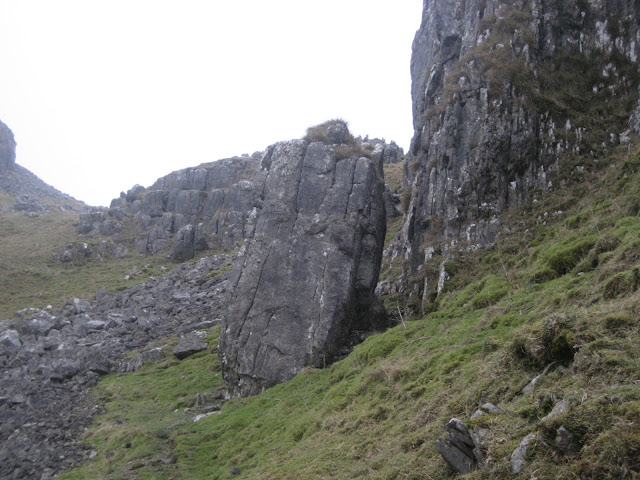 Still more awaits the explorer.  Heading along to the opposite corner of the Citadel and we meet the Pinnacle.  Scramble up behind it towards Skull Gully for the best view. 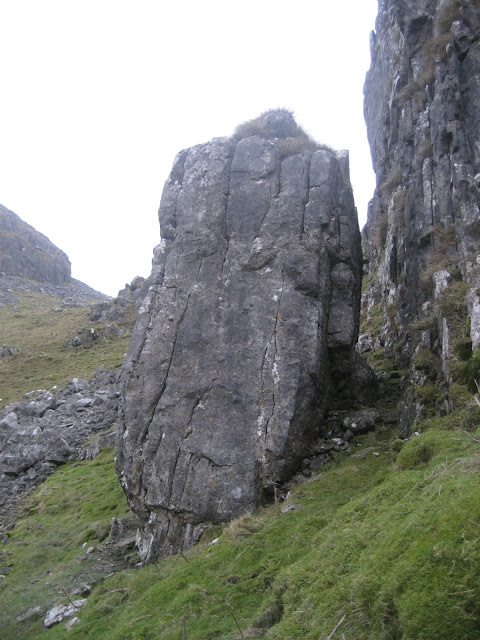 This is a tremendous and little known feature of the Settle landscape and a sense of the scale can best be gained by squeezing through the gap to the right, between the Pinnacle and the cliff.  Amazing to think there was once a cave here, but a series of glaciations have put paid to that!

I've now scrambled up to Skull Gully and the Pinnacle comes into view with Sugar Loaf Hill Beyond.  The entrance to the Gully (remember it looked like a cave from the summit) is on the left.  Peering inside, the skull - once recognised, will stay with you. 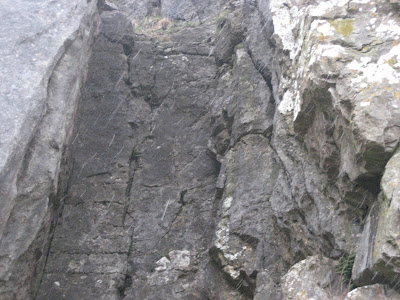 Now come on - he's grinning down at you just a tiny bit right of centre.  Use your imagination! 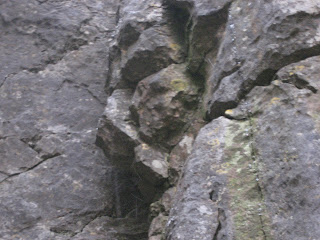 Or try this - reverse back on your computer chair - slowly now - bit by bit - and watch him, staring you out.  You'll get used to me being like this.  He's ok with me, but insult him at your peril.  If you love limestone you're safe enough.

Mind you - he's not as impressive as this Sheep I found earlier, up near the summit.  I hope nobody else sees him as he's mine. 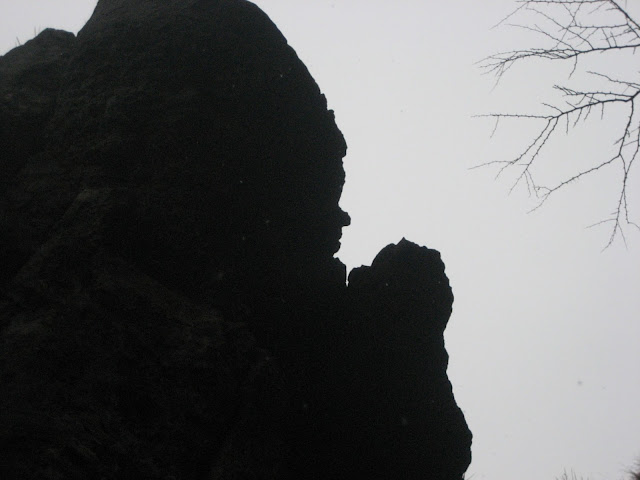 Or try this one!  Look skywards in Skull Gully and there's a guy with a big nose having a conversation with a smaller person on the right.  I call these Gladstone and Victoria. 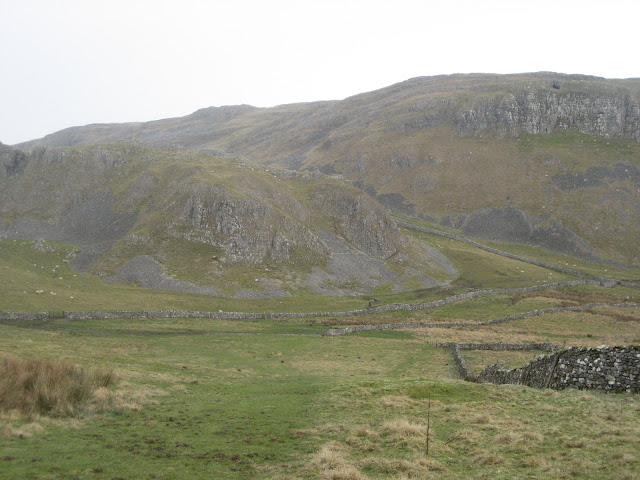 Back to normality - if it's possible - having scrambled down to the valley from Skull Gully we re-trace our steps towards Sugar Loaf Hill and back towards the car.  The cavern you can see punctuating the clifftop on the top right of the picture is Lookout Cave.  I'll take you there another day as long as you don't mind heights. 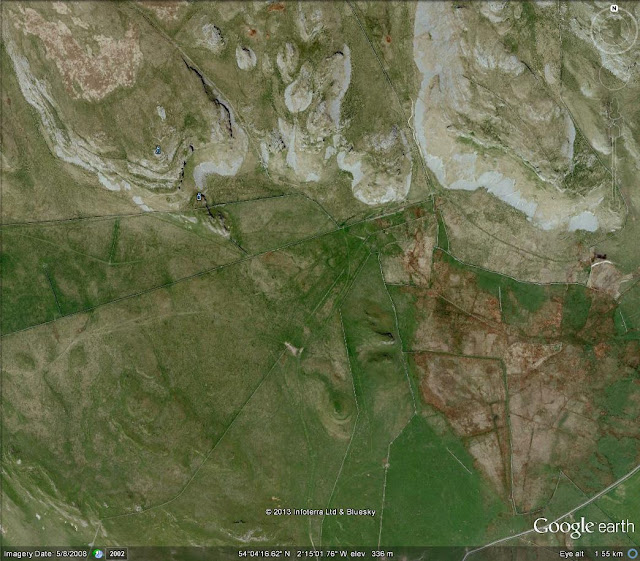 Warrendale Knots, top centre and left, from the air.  The isolated circular 'lump' (slightly left at the top) is the Dome, and the plateau of the Great Knott is on the far left.  The distinctive limestone pavement on top of the Citadel can be made out.  Sugar Loaf Hill is the rounded knoll at bottom centre.  The parking spot is just to the left of the 'Google' logo, between the Roman Camp and Scaleber Force.  Attermire Scar, home of famous discoveries, is the white limestone mass in the top right quadrant.

Comments on my Warrendale Knots adventure would be welcome.  If interest generates I will post the full chapter!!

Posted by Stephen Oldfield at 03:25