The idea behind the book

Warrendale Knots - Dolomites of the Dales


A lot of people whizz around the Three Peaks and miss out on so many hidden features.  Other areas, well away from the crammed and crusty car parks are worth seeking out for a touch of solitude.  Take Warrendale Knots, for starters: 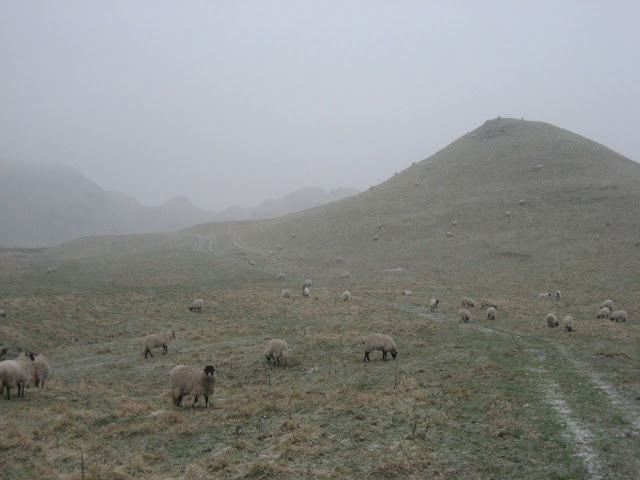 Here, the Knots loom in the background like a ruined fortress peeping out of the mist.  That's Sugar Loaf Hill on the right - part of a coral reef from a time when this was a shallow area of sea bordering deeper water.  Sharks will have once picked about where the sheep are grazing!  Climb up on the Sugar loaf and see the reef limestone cap - full of corals.  The best place to park for this adventure is up on the Settle to Malham road, near Scaleber force.  This saves you a slog from Settle - but I admire you if you can cycle it. 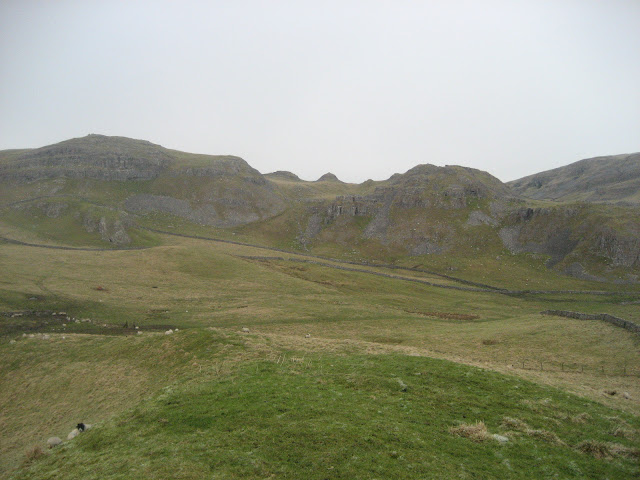 The approach to the Knots is always thrilling.  What I call the Great Knott (once known as Beacon Scar) is on the left, with the central 'dome' and the bastion-like 'citadel' in the middle.  Over on the right is a scree slope up to the 'main entrance' ... so let's have a closer look ... 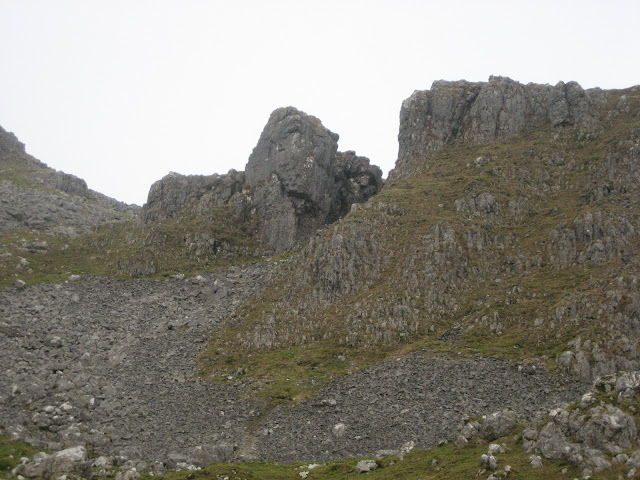 Who needs Harry potter and the Hobbit when you have Warrendale Knots?  The way on is up the curve of scree and between the two massive 'gate posts' of the main entrance .. 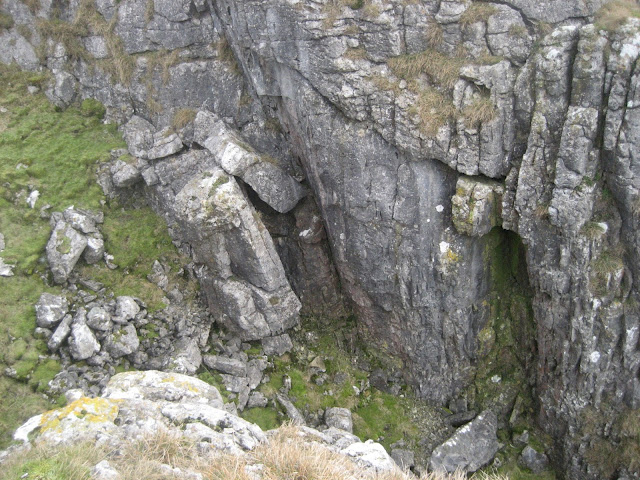 Pulpit Rock stands hidden in the entrance - looking like a smaller version of the one on Portland Bill in Dorset. 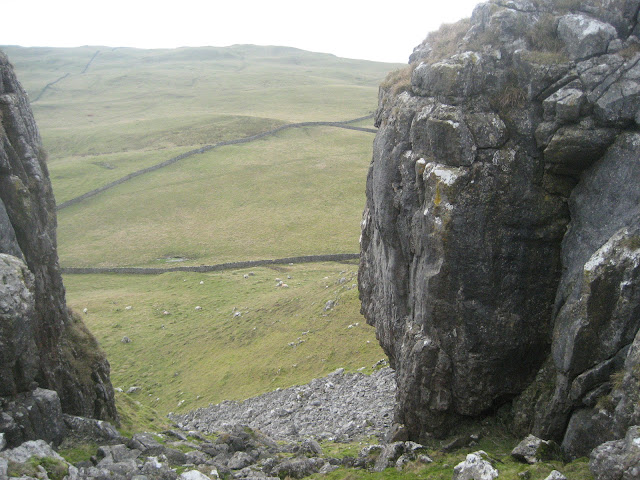 Looking down through the entrance - the fields mark the line of the Mid Craven Fault, whose fault is was that the Knots were formed in the first place!  That's a layer of Bowland shale just below the grassland, with the limestone buried far below (the 'downthrow' of the fault).   Ice has worn away the shale to leave reef limestone sticking out - and that's why we have the tasty little Sugarloaf. 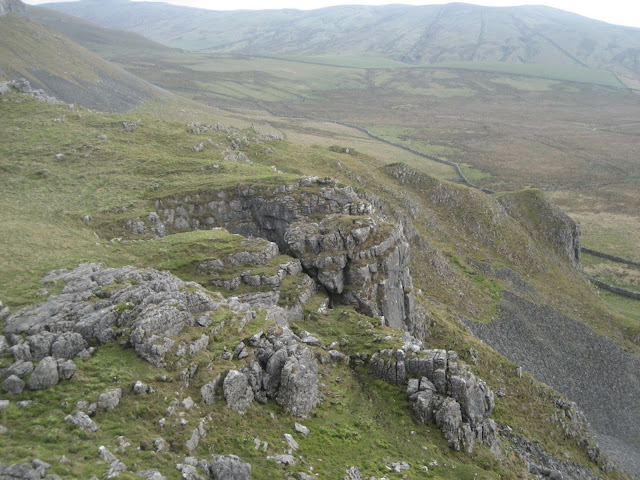 Here I've just popped up through the main entrance and am glancing back at it.  See that the 'gatepost' is actually a detached limestone pinnacle?  If you're brave (or daft - or both) you can step across that dodgy looking crack onto it. 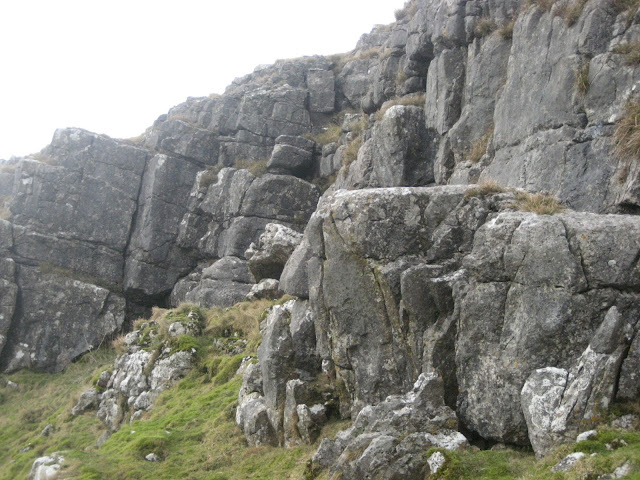 Remember the main entrance?  Well, if you head up through it and turn left, you reach this limestone scar where the best butty spot in the Dales is shyly hidden.  I call it 'The Royal Box.' 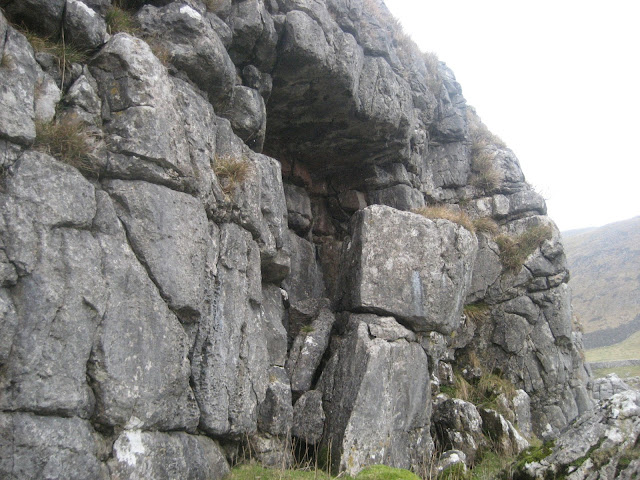 The Royal Box is magnificent.  The idea is to climb inside and lean over the parapet, like those two old guys used to do on the Muppet Show.

Here's the view out - looking over towards Rye Loaf Hill in the distance, with the famous Attermire Scar on the left.  Note the icicles - like being in the mouth of a T Rex before being swallowed.  I love this place. 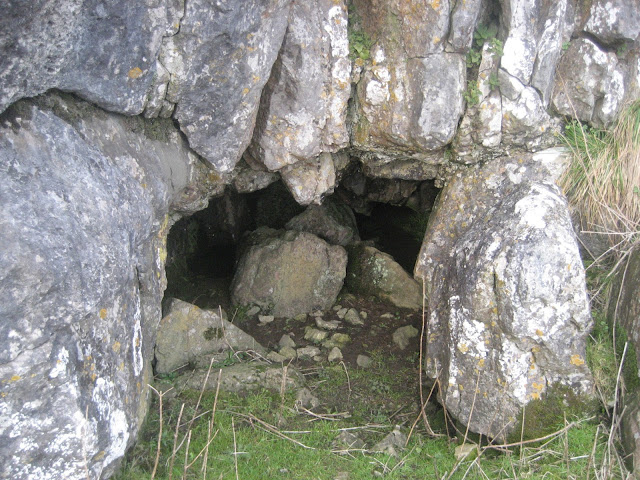 The Wine Cellar is a quaint little cavern underneath the Royal Box.  I didn't find any tipple - but there was a dessicated frog and a few Little Owl pellets.