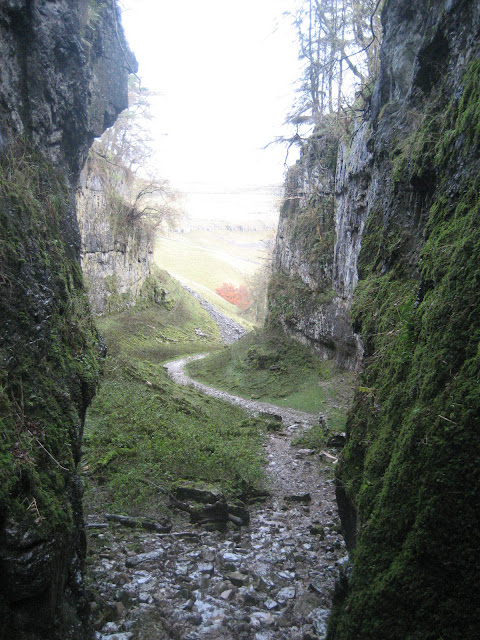 The South East slopes of Ingleborough are more gentle than those of the west - with a gradual approach to the summit that passes a host of internationally important karst features.  Trow Gill is a classic example of an abandoned meltwater gorge, and is easily accessible from Clapham.  Some 14000 years ago, during the last glaciation, all the major sinks on the limestone plateau beneath Ingleborough were frozen up, and blocked by glacial debris. As the ice began to melt, over thousands of years it formed a torrent that moved over the frozen land, seeking a place to escape and finding a major joint of weakness which it gradually eroded into this famous landscape feature. 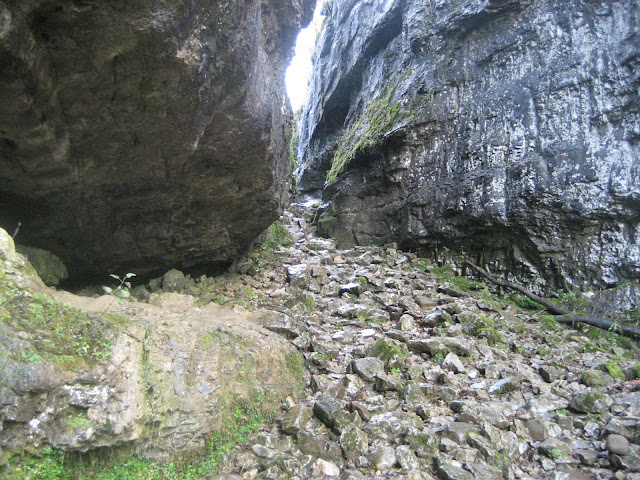 Even today you can imagine that, at any minute - a great torrent is going to roar down there and sweep you off your feet.  The dry waterfall is an exciting scramble, bringing the explorer as close to the bare bones geology as it's possible to be.  Notice how swirling water has picked out a bedding plane on the left of the picture to form this small cavern - 'the devil's kitchen.'  It's a great spot, by the way, for shelter and refreshment, with its own 'kitchen table' formed by a boulder that has fallen from the ceiling. 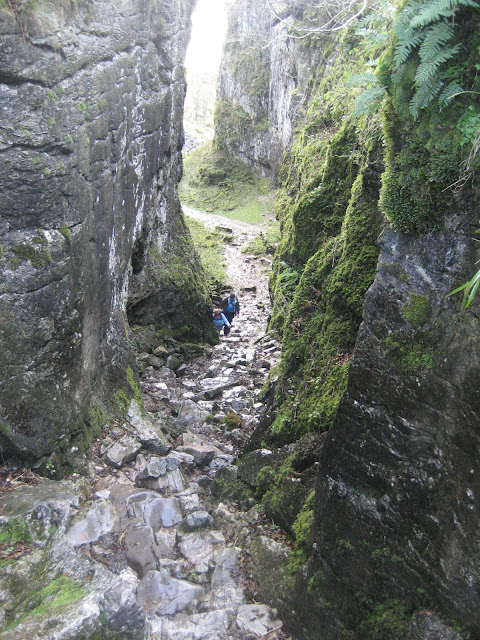 Similar weaknesses in the Great Scar limestone have been exploited by the meltwater torrent as we look down the gorge from above, where the early stages of developing caves can be seen on the left. 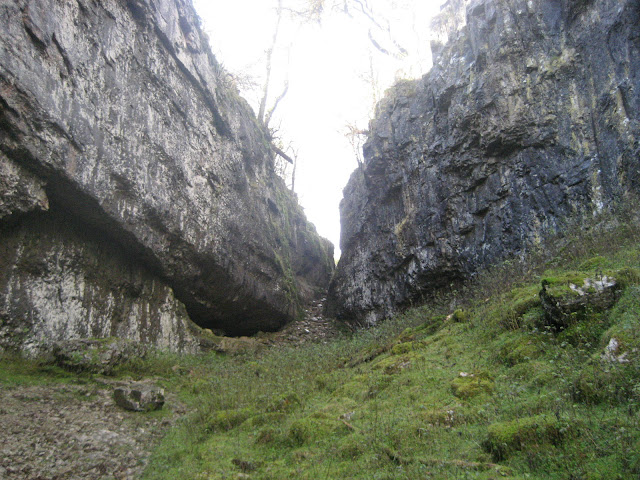 There has been some dispute by geologists as to whether Trow Gill was at one time a cavern itself, and that the boulders underneath the moss on the right represent a section of collapsed roof.  This theory is nowadays  rejected in favour of the gorge having always been an open meltwater channel. All of the limestone seen here originated from corals and tiny sea creatures that lived in a warm shallow sea some 340 million years ago. The two huge bedding planes in the cliffs on the left (one terminating at the devil's kitchen and one at top left) indicate periods of time when there was a lull in deposition of limestones - probably a result of falling sea levels.  Often in these situations, muds washed into the very shallow sea formed shales which can be picked out in the bedding plane.  The main 'wall' of limestone at left centre, above the cave, represents an immense time period with more or less constant sea levels where limestone formation continued without interruption for millions of years.  Altogether the band of Great Scar limestone around Ingleborough is about 800 feet thick - so here we are looking merely at the top 200 feet or so.  This means that, beneath the path, there is still another 600 feet of lovely white rock before we meet the basement rocks underneath - though this can vary owing to the undulating surface of the ancient basement. Little wonder then, that this wonderful mountain has so many caves to explore.  Water hitting limestone always finds a way in - and a way out! 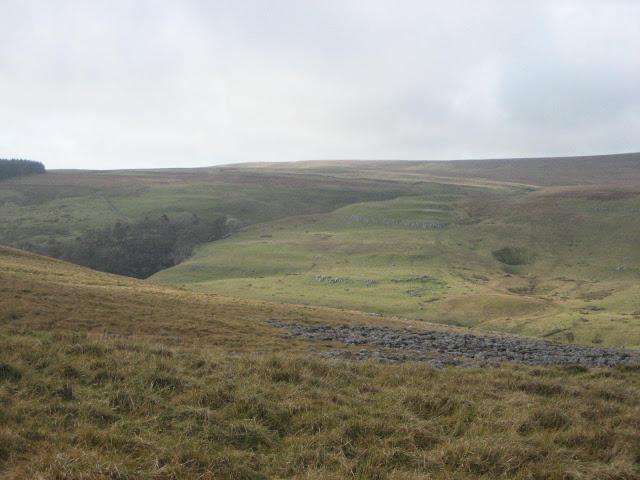 This very different view of Trow Gill is from the summit of Norber to the east.  The gorge is clearly a slice through the landscape on the left, with the upper reaches tapering away up to Gaping Gill, on the slopes above.  This picture gives some idea of the force and action of the meltwater as ice sheets on the plateau above began to melt.  The large doline right of centre, in Clapham Bottoms, is one of the largest in the area - penetrating through the glacial till into the Great Scar Limestone, and likely to have originated in pre-glacial times when limestone slumped due to solution in passages below.  In this area is Body Pot, where, in 1947, the fully clothed corpse of a man with shaving gear, coins and a bottle of cyanide was found.  Had he been a German spy who, once discovered - had taken his life?  It remains one of the great human mysteries of the Three Peaks. 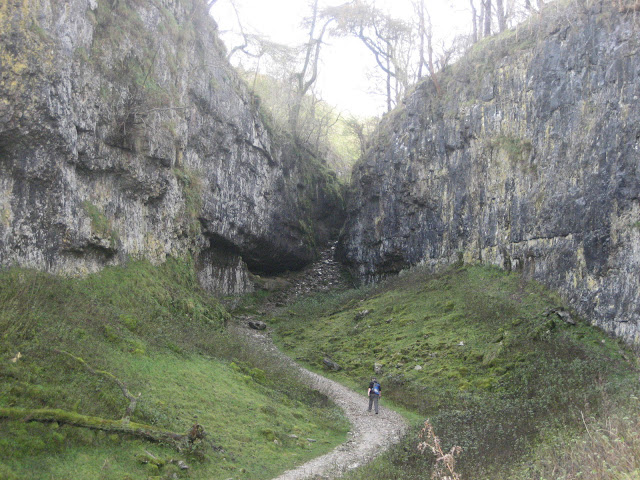 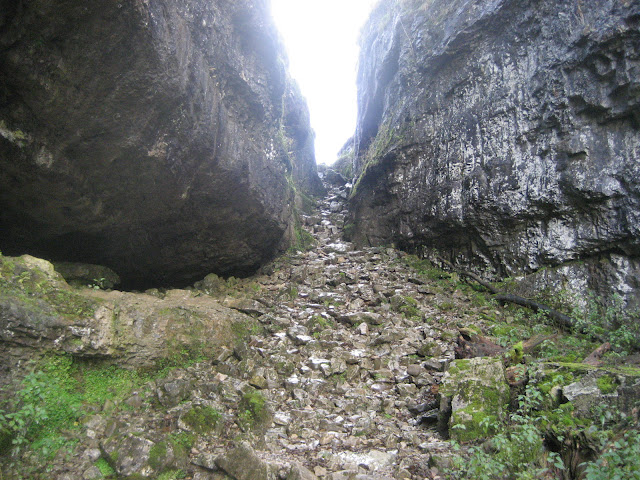 Here the 'table' in the Devil's Kitchen can just be seen on the left, along with the full extent of the dry waterfall.  Following the Ice Age, after the melting of the glaciers, Fell Beck once again found its way down the shaft of Gaping Gill - and the relatively young meltwater gorge was abandoned. 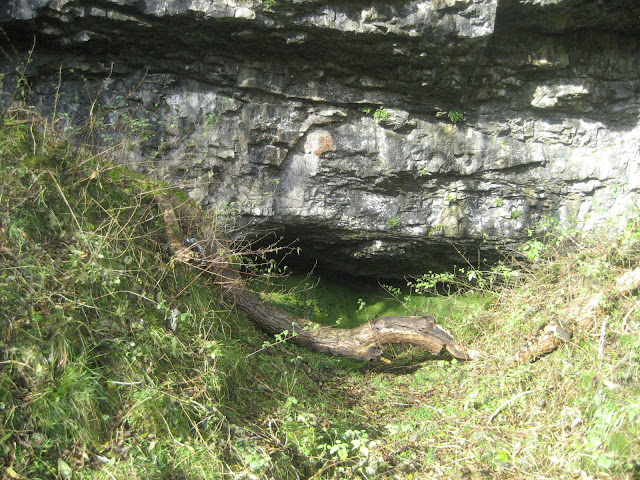 Walking back towards Clapham from Trow Gill, a small valley on right reveals the hidden Foxholes Cave.  This has produced human and animal remains and is one of the most important archaeological sites in the Three Peaks area.  The dry valley in front shows that this is a long abandoned resurgence - the water now having found a new path and exit in its journey underground. 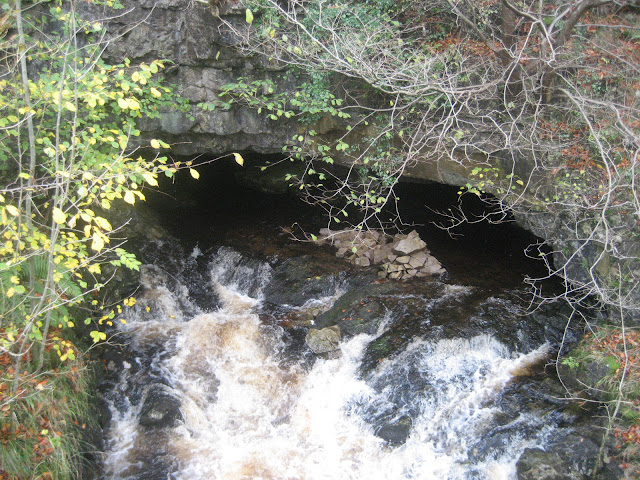 The water that falls into Gaping Gill now emerges from the Great Scar limestone here, at Clapham Beck Head - a short distance south of Foxholes Cave.  In normal weather the movement through the passages is extremely constricted.  Dye introduced into Gaping Gill can take a number of days to show up in the water here.  Movement of the water, is, of course, much more rapid in flood conditions. 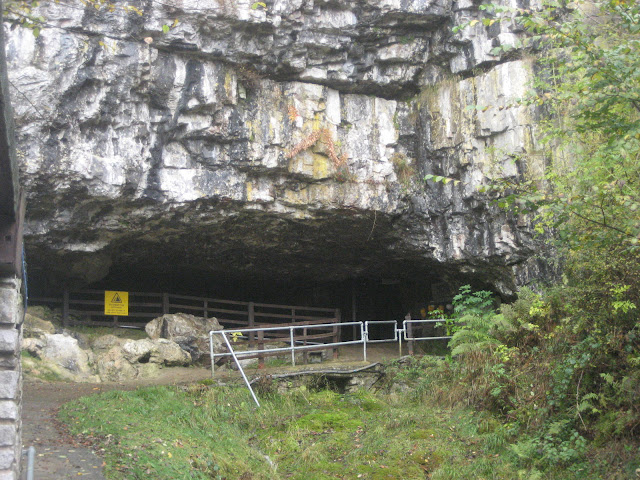 In 1837 James Farrer broke through a stalagmite barrier to release the underground lake from Ingleborough Cave - now a superb show cave.  The link was only made through to Gaping Gill in the 1980s.  There is a small admission charge and it is about a 40 minute walk up through the woods from Clapham.  We'll visit it later in the year. 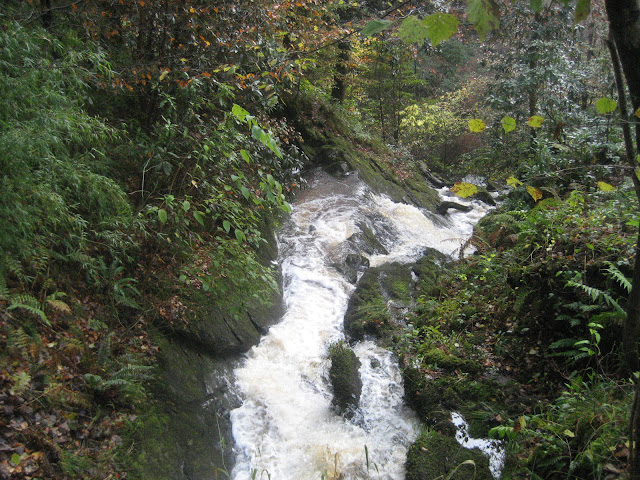 Further downstream, Cathole Syke reveals the basement rocks beneath the Great Scar limestone, brought to the surface by the tilt of the North Craven Fault, and forming a powerful tributary cascade in the wettest conditions. 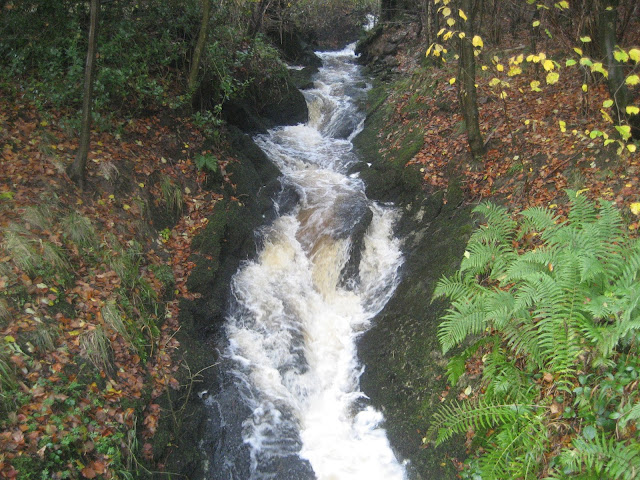 Here's another view of Cathole Syke - the ancient basement rocks forming the streambed due to the uplift of the Craven Fault, where the limestones above have been eroded away over time.  These greywackes are similar to the rocks forming the Norber boulders in the adjacent valley of Crummackdale. 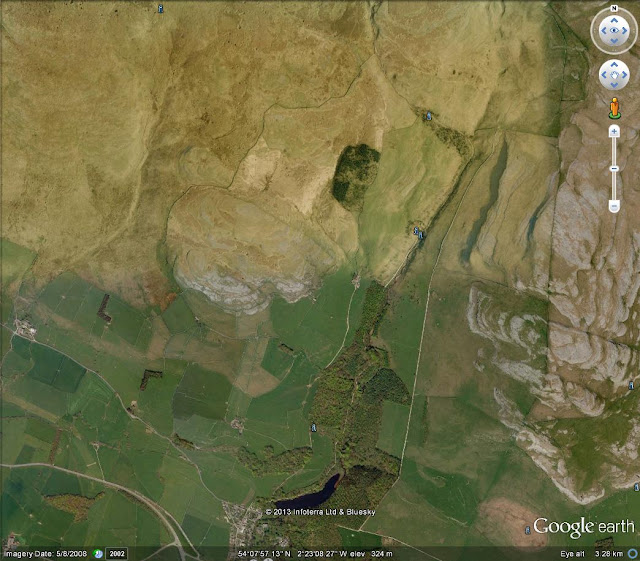 Clapham to Trow Gill.  The village of Clapham is just left of centre at the bottom of the photograph, with the lake created by the Farrer family very prominent.  Cathole Syke is in the woods by the path just above the northern tip of the lake.  Ingleborough Cave is just above and to the right of centre, where the two 'i' points are situated.  The path then swings to the left, where the wooded glen of Trow Gill can be seen, again marked by an 'i' point.  The  limestone scars on the right of the picture are the upper reaches of Norber, with the famous boulders just off the photograph to the right.

Trow Gill and back is a great little stroll from Clapham - especially when it's too misty to climb Ingleborough.  Hope you enjoy this special landscape.