Clues to the past in a lush landscape 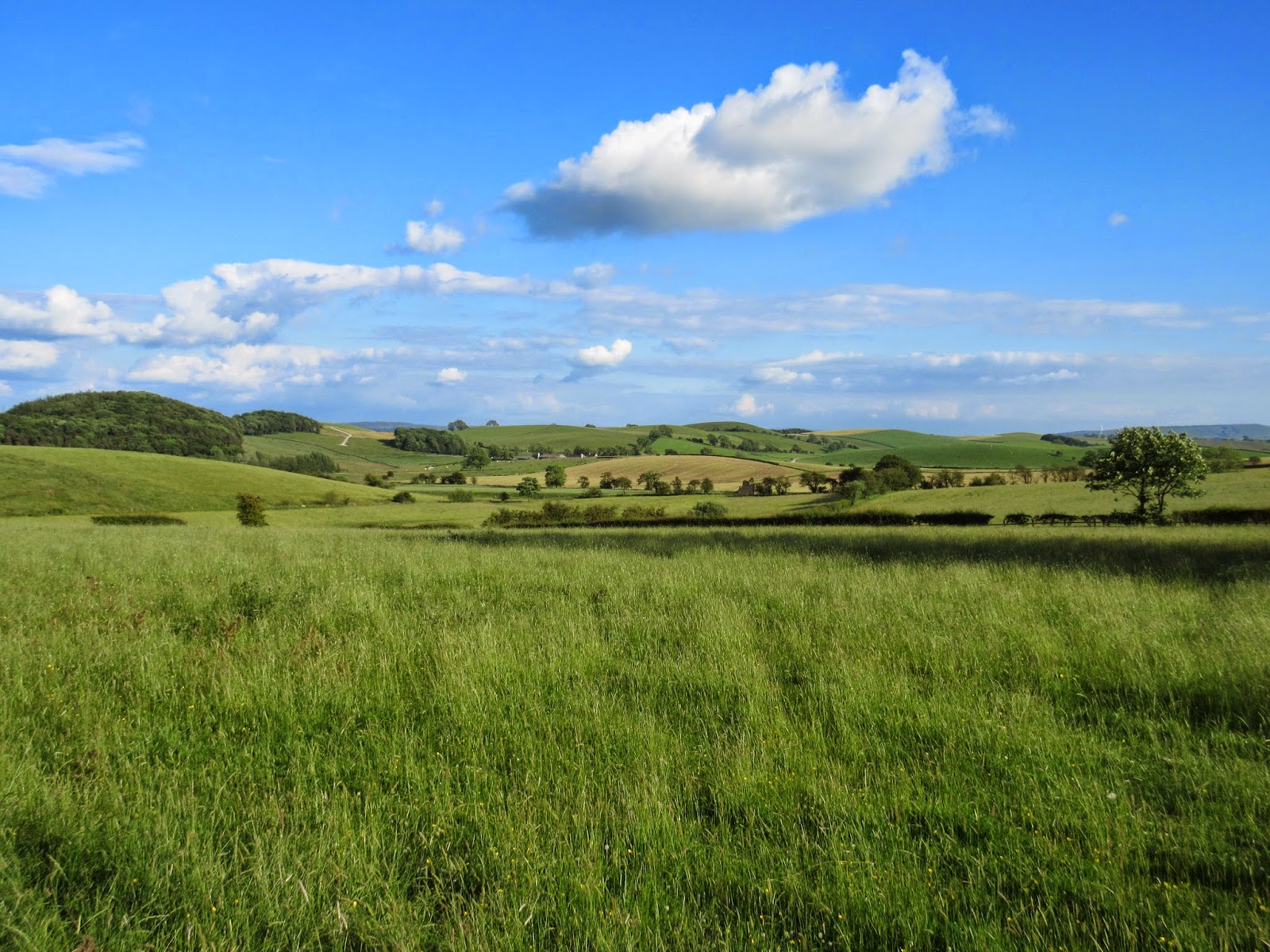 Last Saturday - on the longest night of the year - I took a stroll through the gentler scenery of the Southern Dales - picking out some neglected but wonderful archaeological sites.  The first topographical features to catch the eyes here are the magnificent drumlin fields around Hellifield - some of the finest in the country. 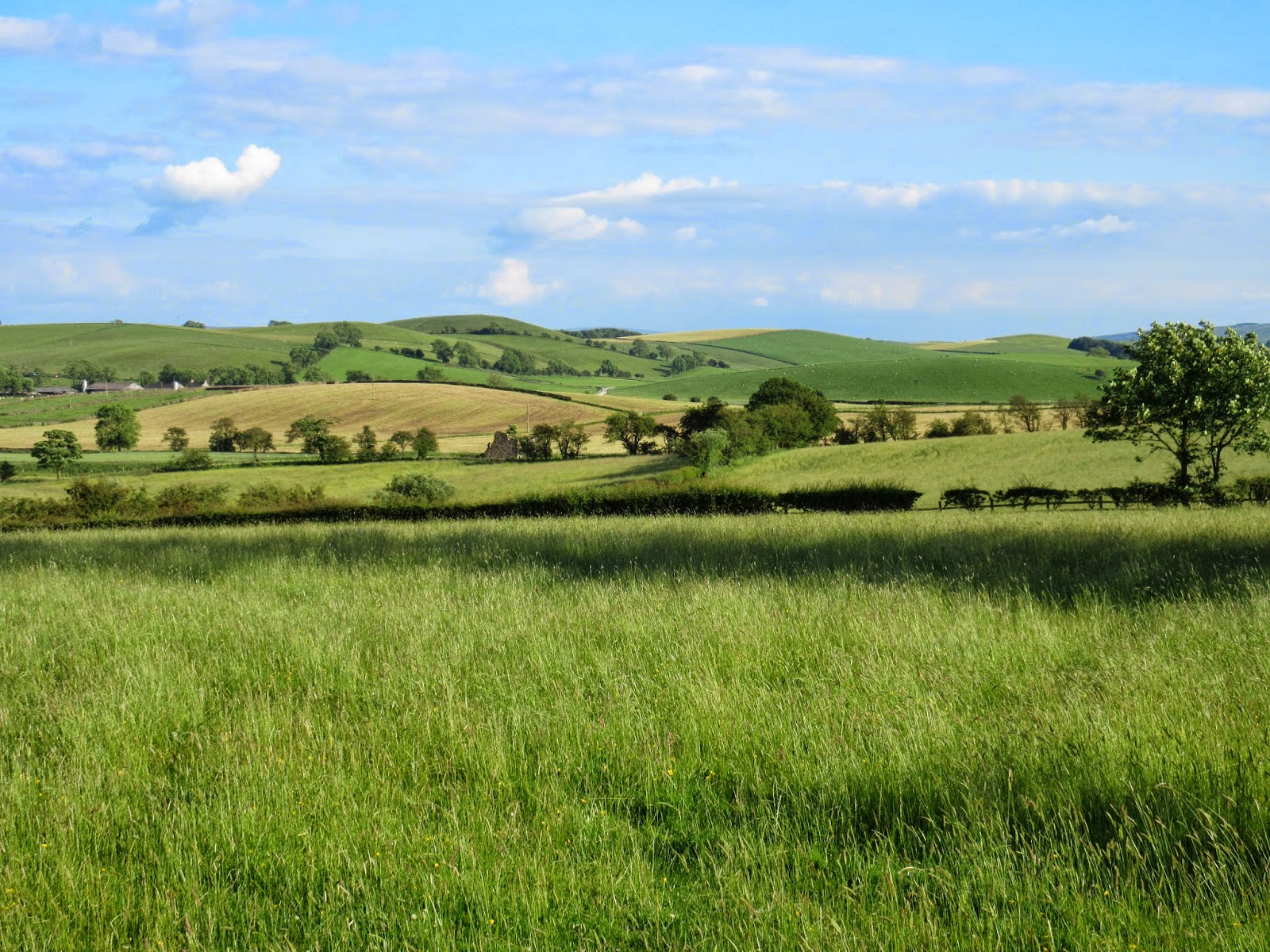 Drumlins are asymmetrical hills with a long and short axis - resembling half buried eggs - and their appearance is often described as 'basket of eggs topography.'  When I was a geography student - they were seen to be where glaciers had ridden up over underlying obstacles and plastered them with 'glacial till' - though geologists still have not agreed on a theory for their formation and the debate over these enigmatic little hills rages on.  They typically occur as large valley glaciers fan out into level land.  The name 'drumlin' comes from the Irish for 'little ridge'. 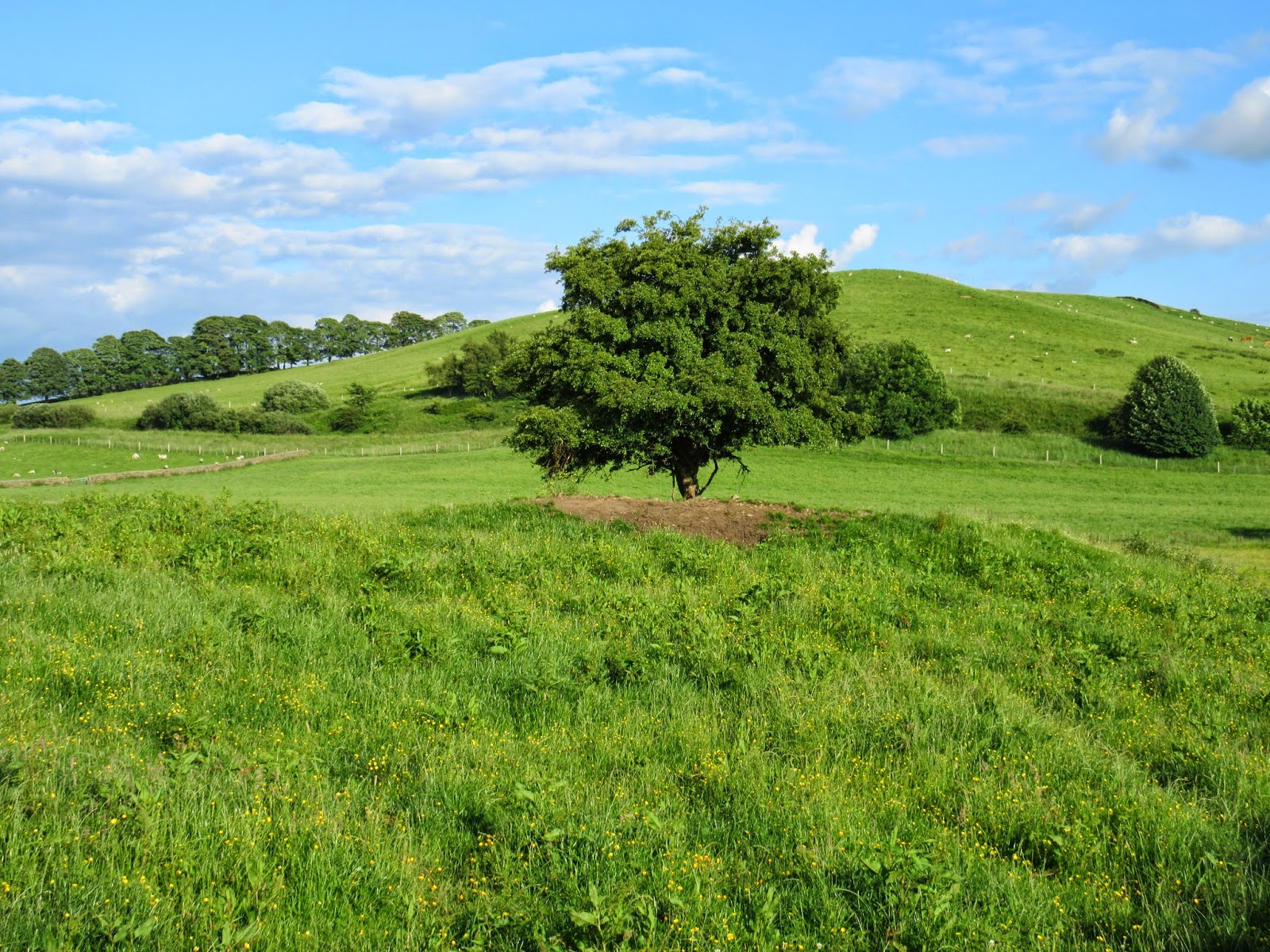 Between Hellifield and Otterburn, at the base of Lingber Hill - a mound on the right hand side of the road is usually passed unnoticed, though it is marked by a tree.  In Harry Speight's classic 'The Craven and North West Yorkshire Highlands' (1892) this mound was given full treatment and is a fascinating feature.    Speight describes how a Mr Gomersall of Otterburn took him to see this 'natural mound'  which had been 'appropriated at a remote period for sepulchral purposes.'  Love the language of the man! 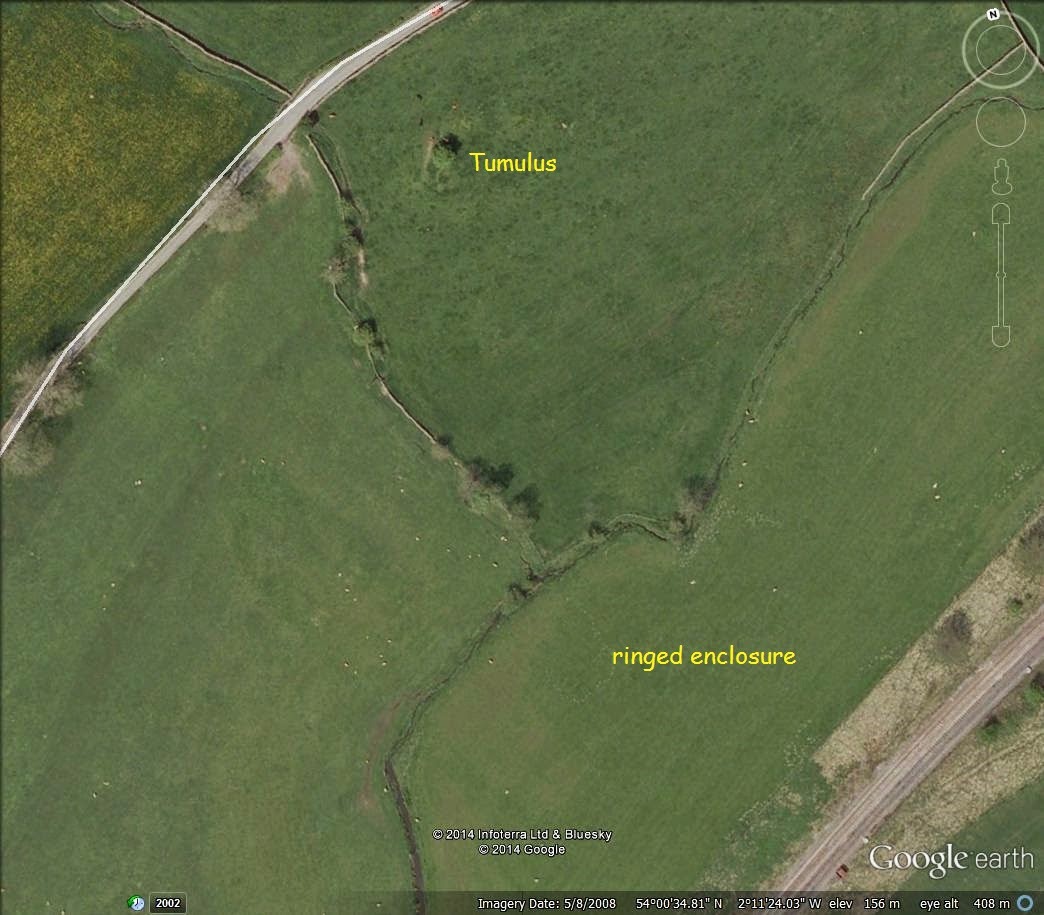 Here is the location of the Lingber Hill Tumulus - just by the roadside.  Crane Field Beck trickles down the field to the south and on this image a ringed enclosure can be seen faintly - this being impossible to pick out in the summer months when the meadow is at full height. Never mind - let's get back to the big attraction. 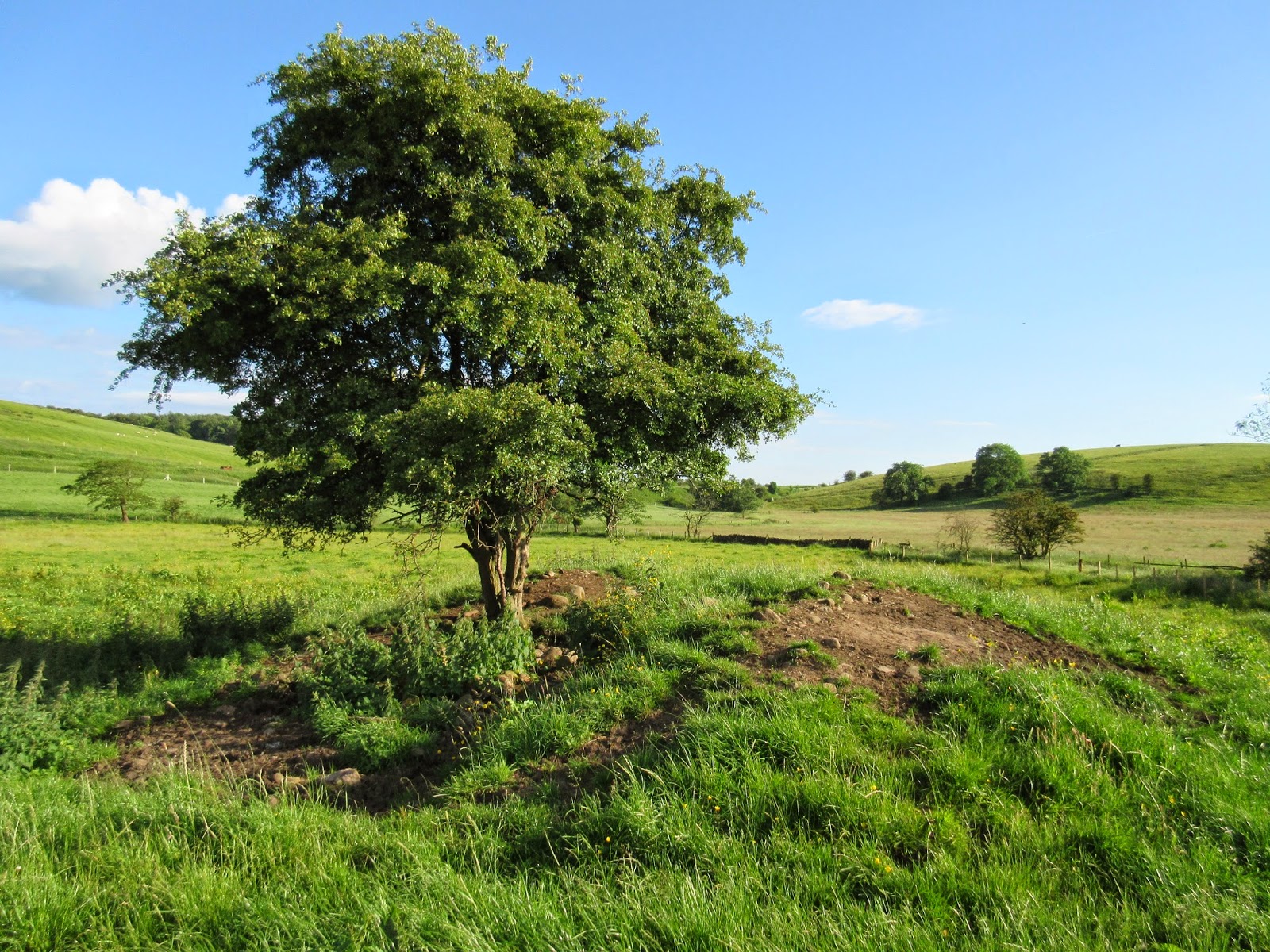 When excavated - the mound contained two large earthenware urns about two feet below the surface.  The largest was 12 inches in height and Speight says it seems to have been 'a reliquary of some early hunter or warrior celebrated in the arts of war.'  In it was lanceolate-leaf-shaped copper dagger and there was also a sharp pointed needle of bone and other small objects like copper fastenings.  The second urn contained similar pieces of metal and both were separated  by four feet and each covered by a stone slab. 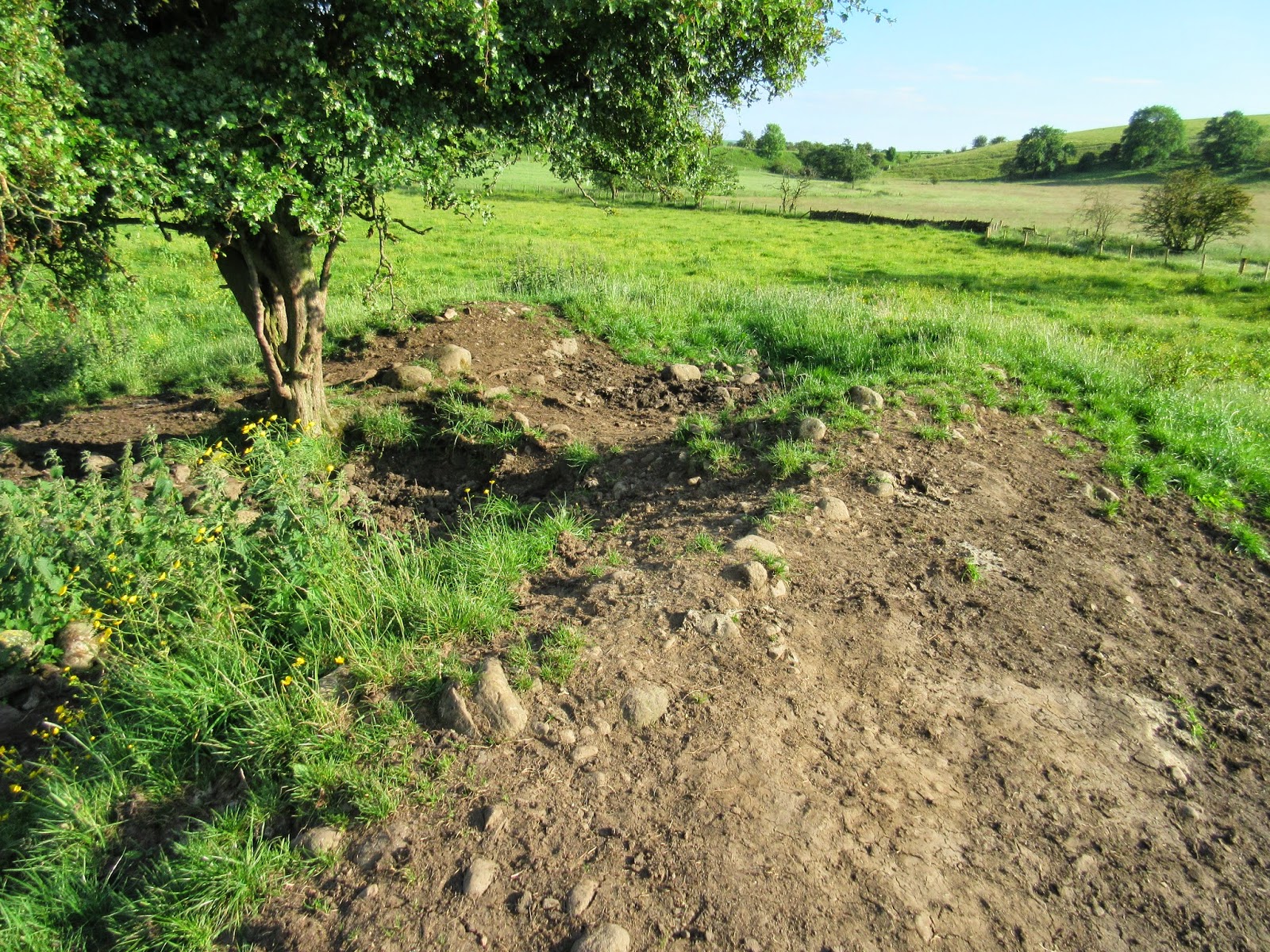 In removing the slabs - a further urn was found, upside down - and covering the bones of a human.  Previous to these early 19th century discoveries. a Mr Wenningber of the nearby farm had discovered a most beautiful object in the fine gravel of the mound.  This was a figure cut in amethystine quartz with a long wand or stick in one hand, with a ball at each end, and a shorter, thicker object in the other.  It was believed to be of Roman craftsmanship. Part of the original trench which ran across the mound can be seen in this image. 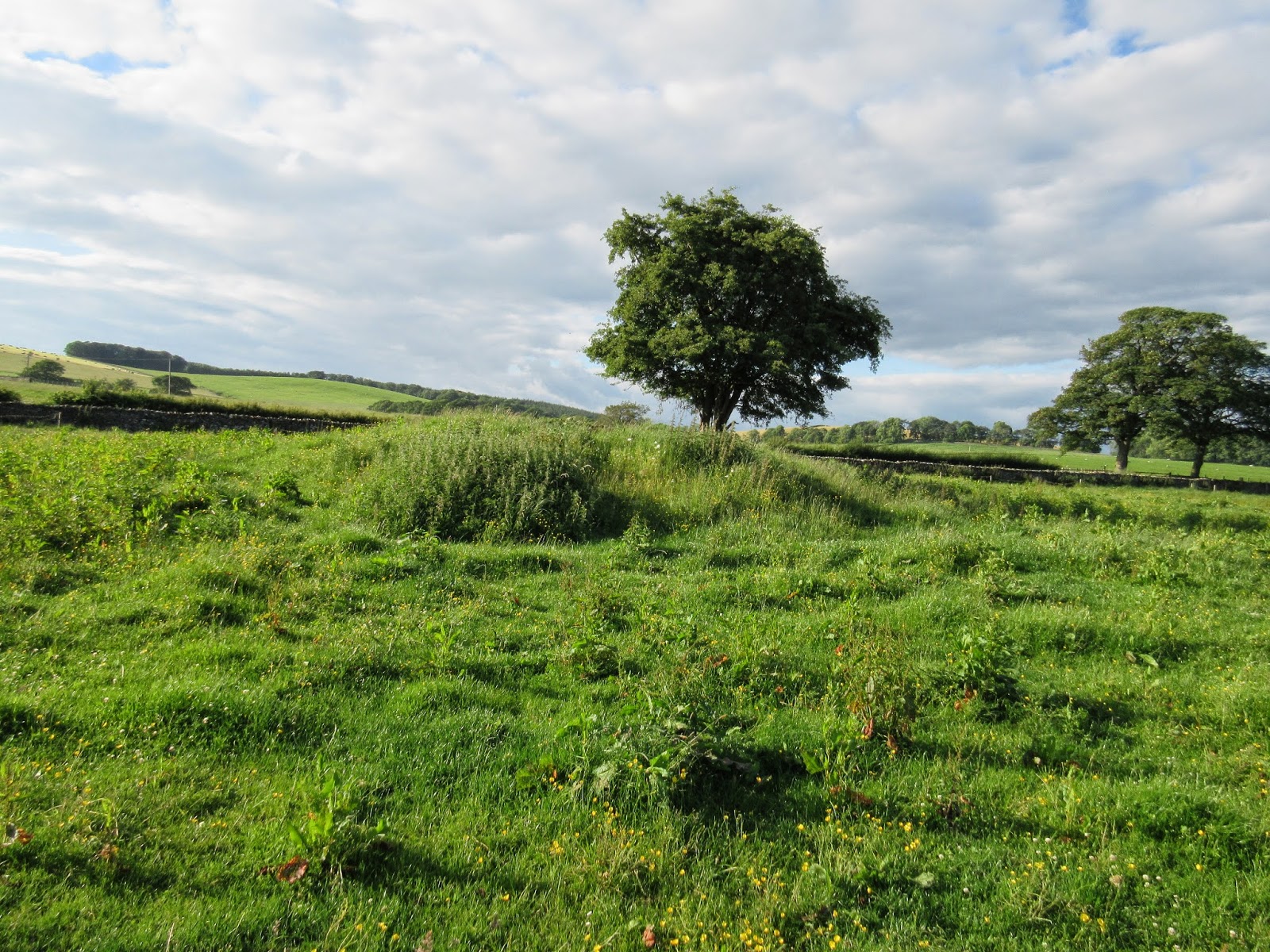 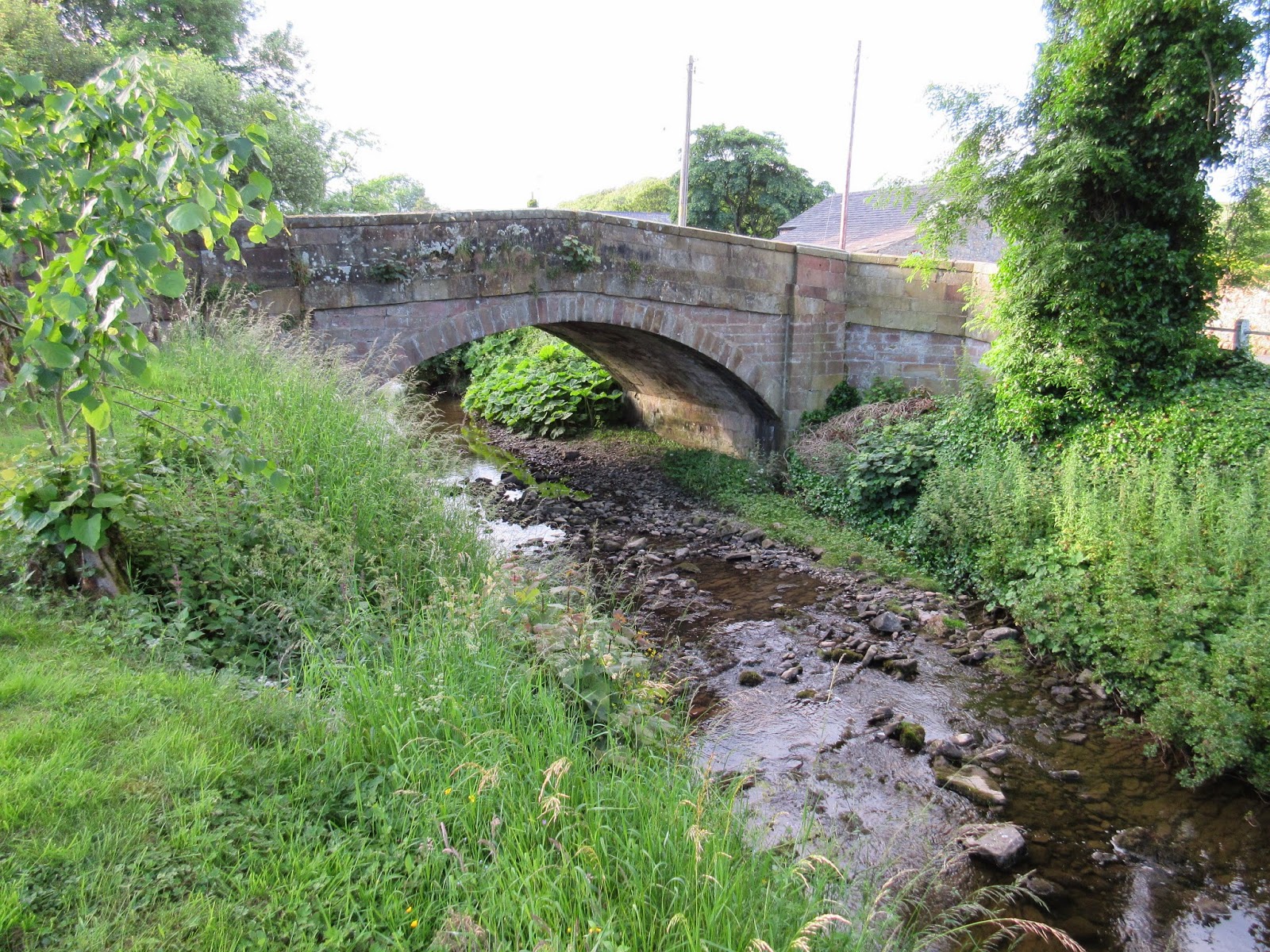 Then it was a stroll into Otterburn - a sleepy village with the bridge spanning Otterburn Beck. 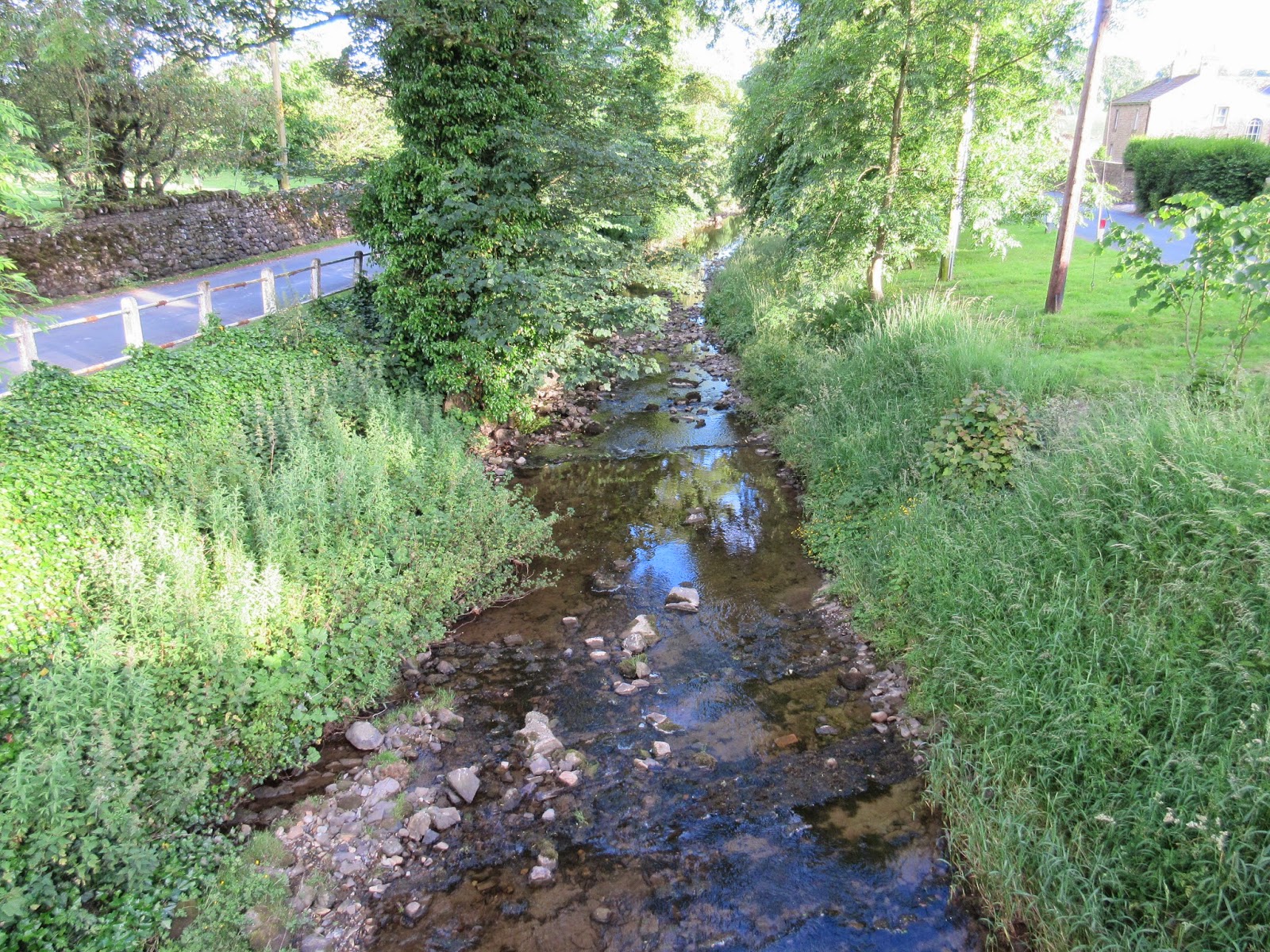 It is place of peace - with a time-stood-still atmosphere. 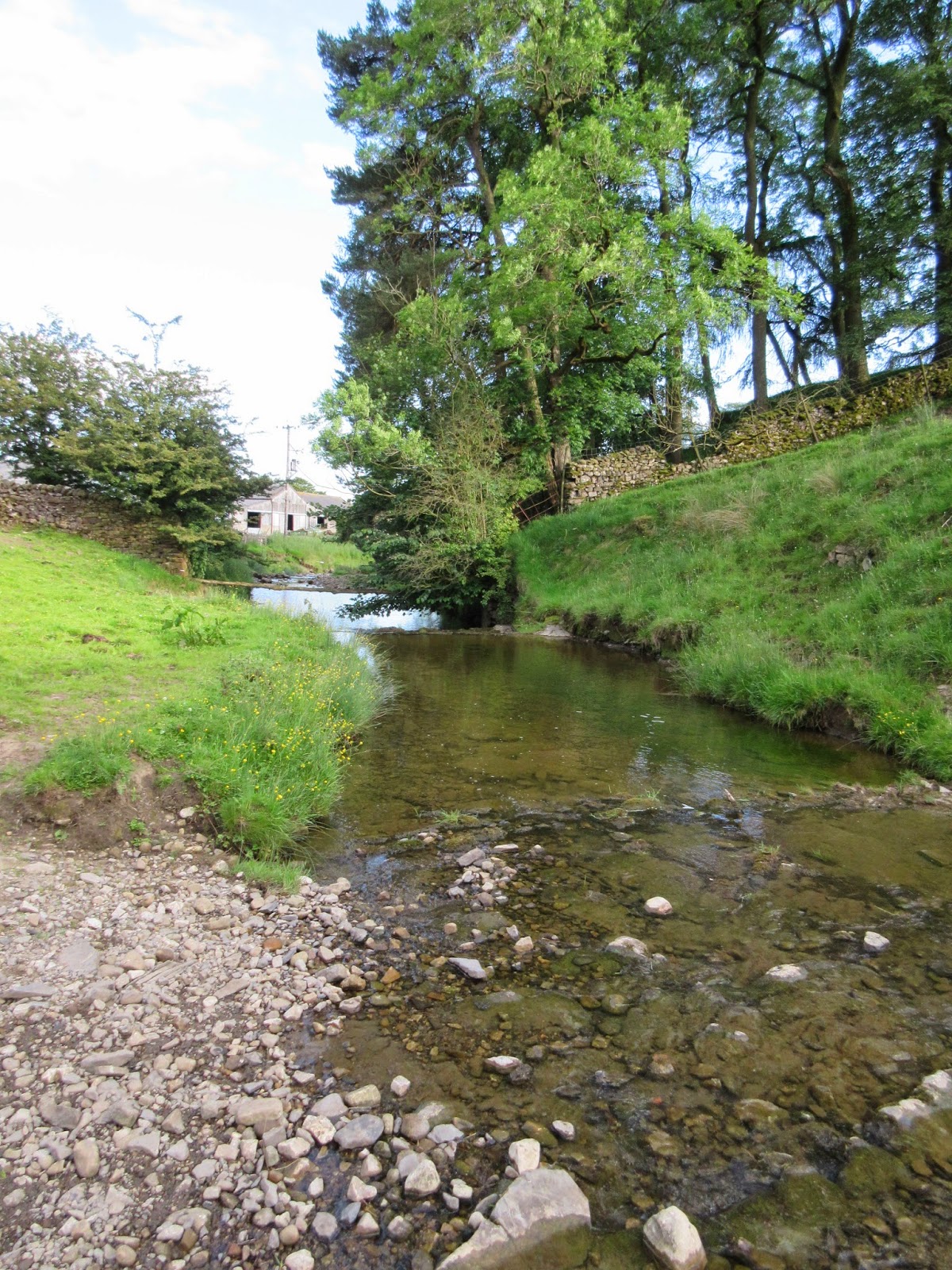 Walking northwards along the rough track towards Kirkby Malham is a great experience. The wildlife is stunning. In just 20 minutes here I was watching a hunting barn owl, playing hide and seek with a fox, and being startled by countless hares and rabbits.  With the big attraction of Malham nearby - few are the people who walk here - and yet it is a stunning place. 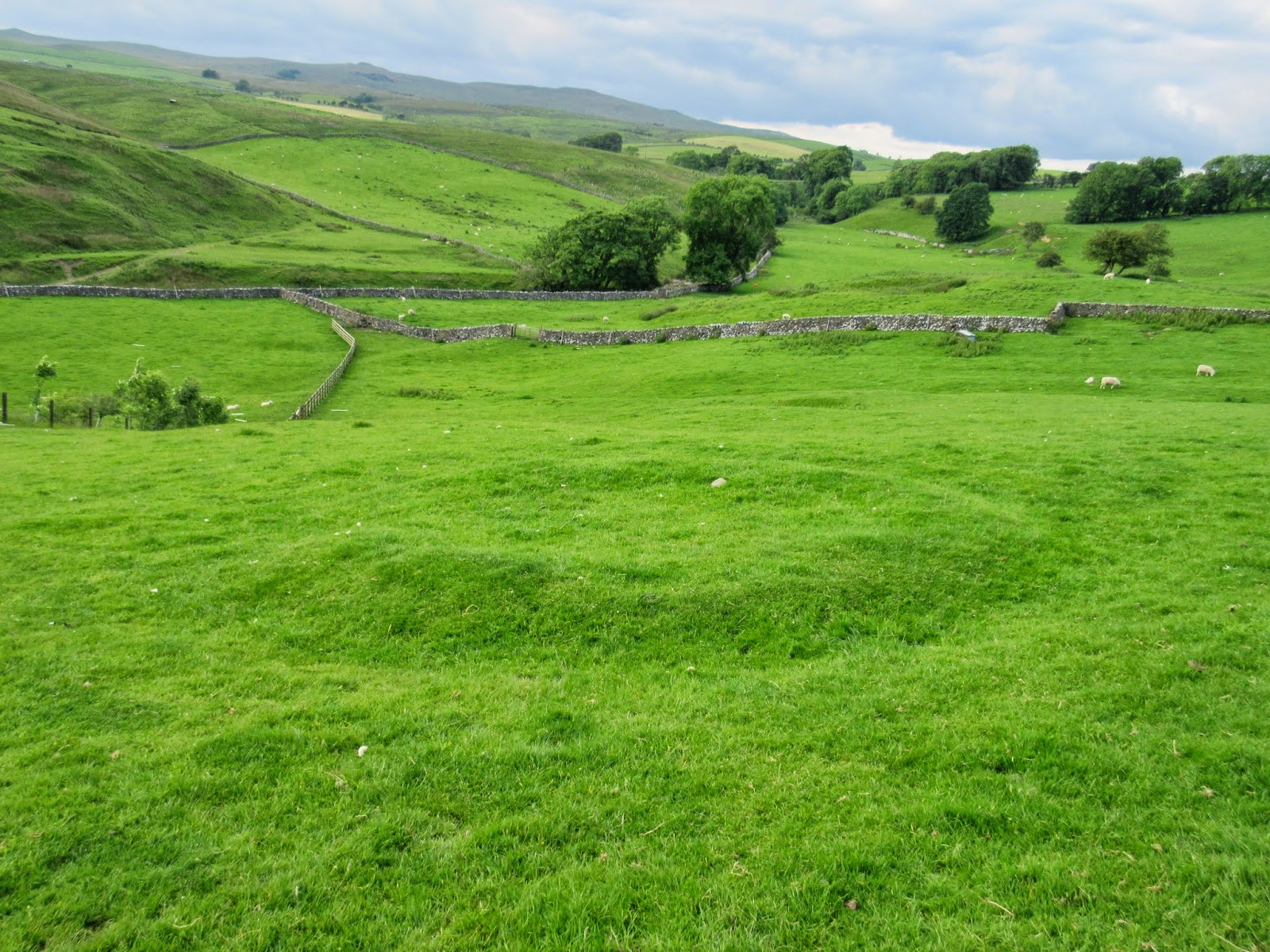 Once a small wood is passed on the right, a climb onto the lower slopes of Park Hill (SD885583) reveals this lovely Bronze Age 'Ring Dwelling' with its south-west facing doorway (top left) to catch the evening sun. It is 12 feet in diameter and Speight says the five feet thick walls served the double purpose of protection and 'withstanding the thrust of the poles for the tent.'  It is at least 3000 years old. 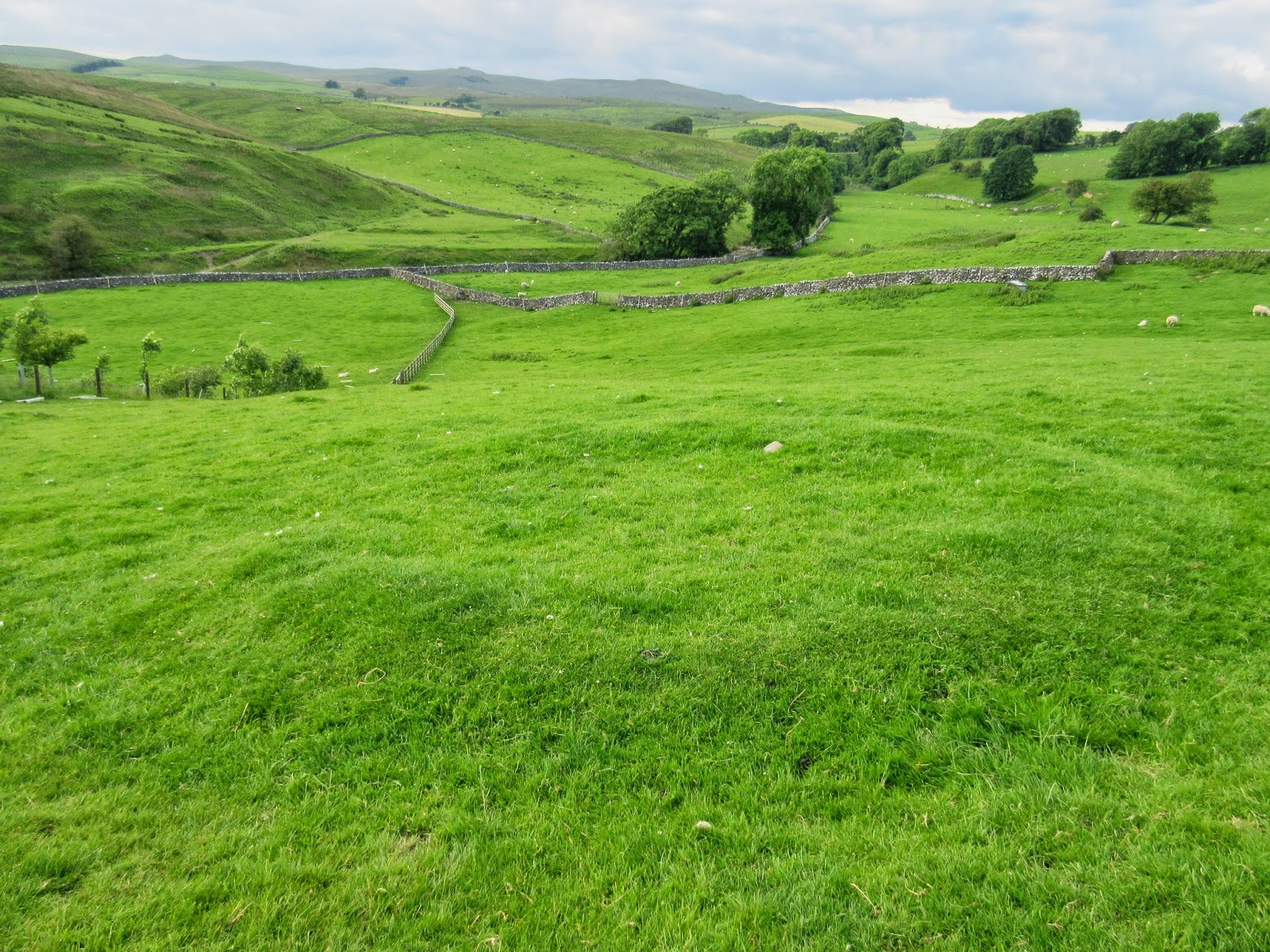 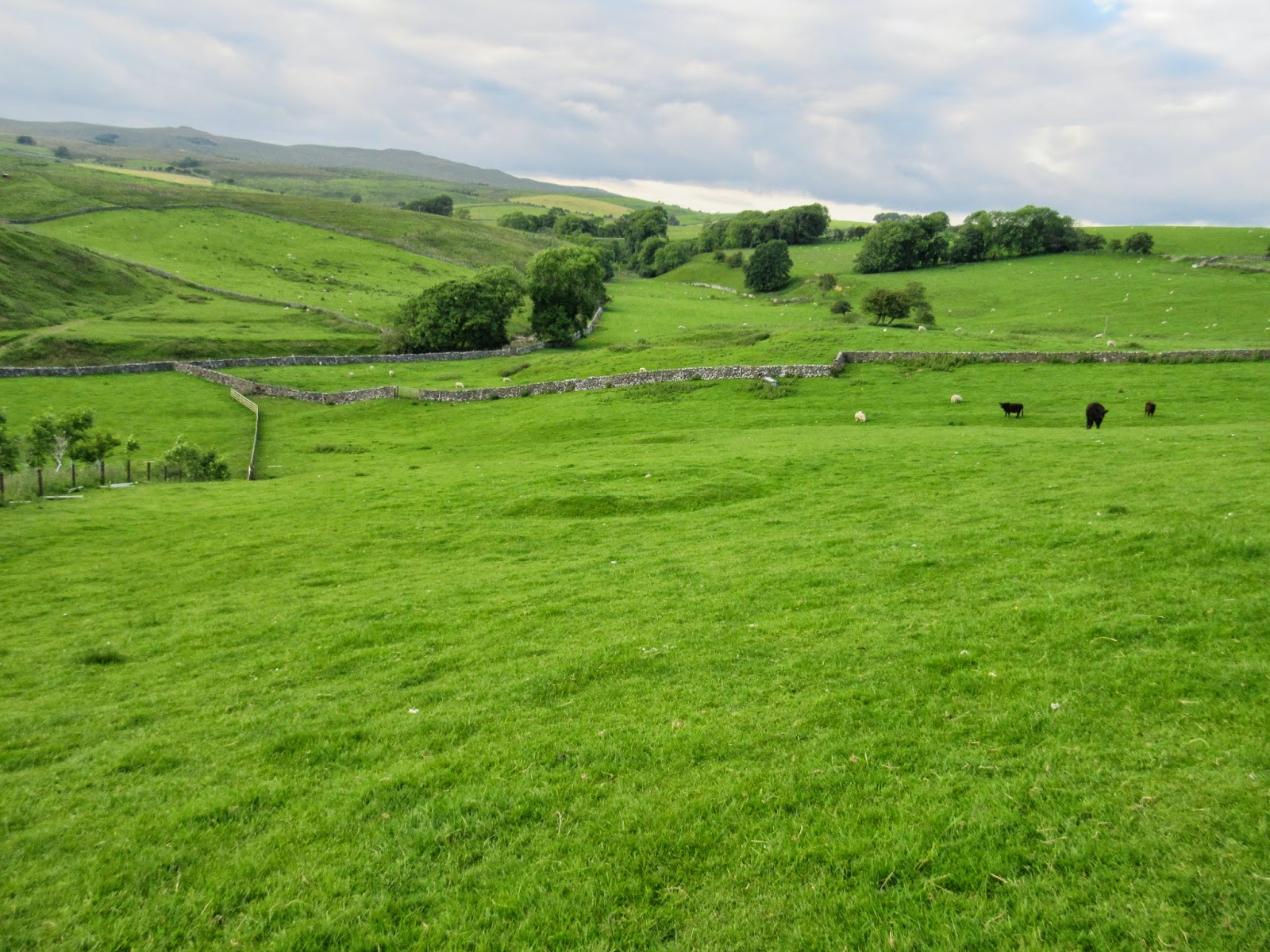 The Ring Dwelling in a wider perspective.  On the skyline at the top of Park Hill, on the extreme right, is a huge earthwork - most likely to be a Bronze Age camp contemporary with the Ring Dwelling - though Speight did wonder if it was Danish. 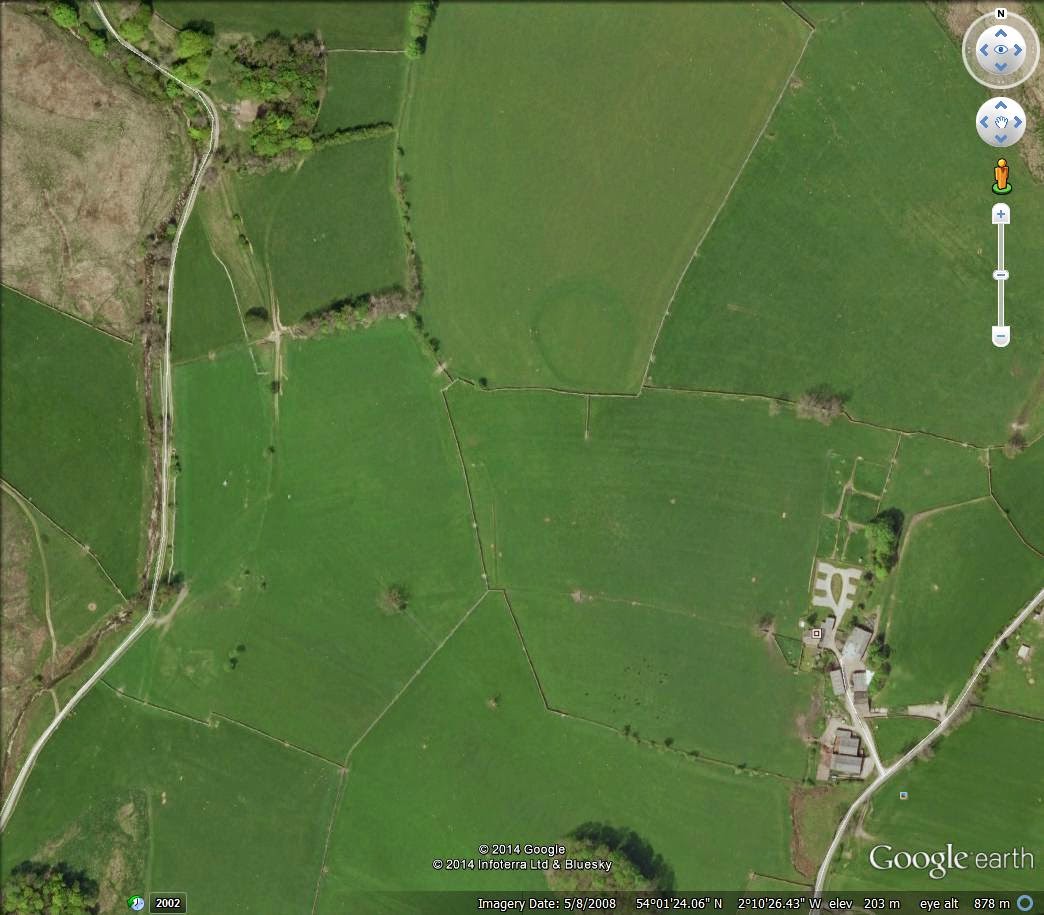 The massive earthworks can be seen at the top centre of the picture.  It was no doubt located with a fine view of Pendle Hill, 15 miles away -which seems to have been important in the sighting of these ancient monuments.  The Ring Dwelling is a the bottom left of the image, just above the tongue-shaped mass of land to the north of the woodland. 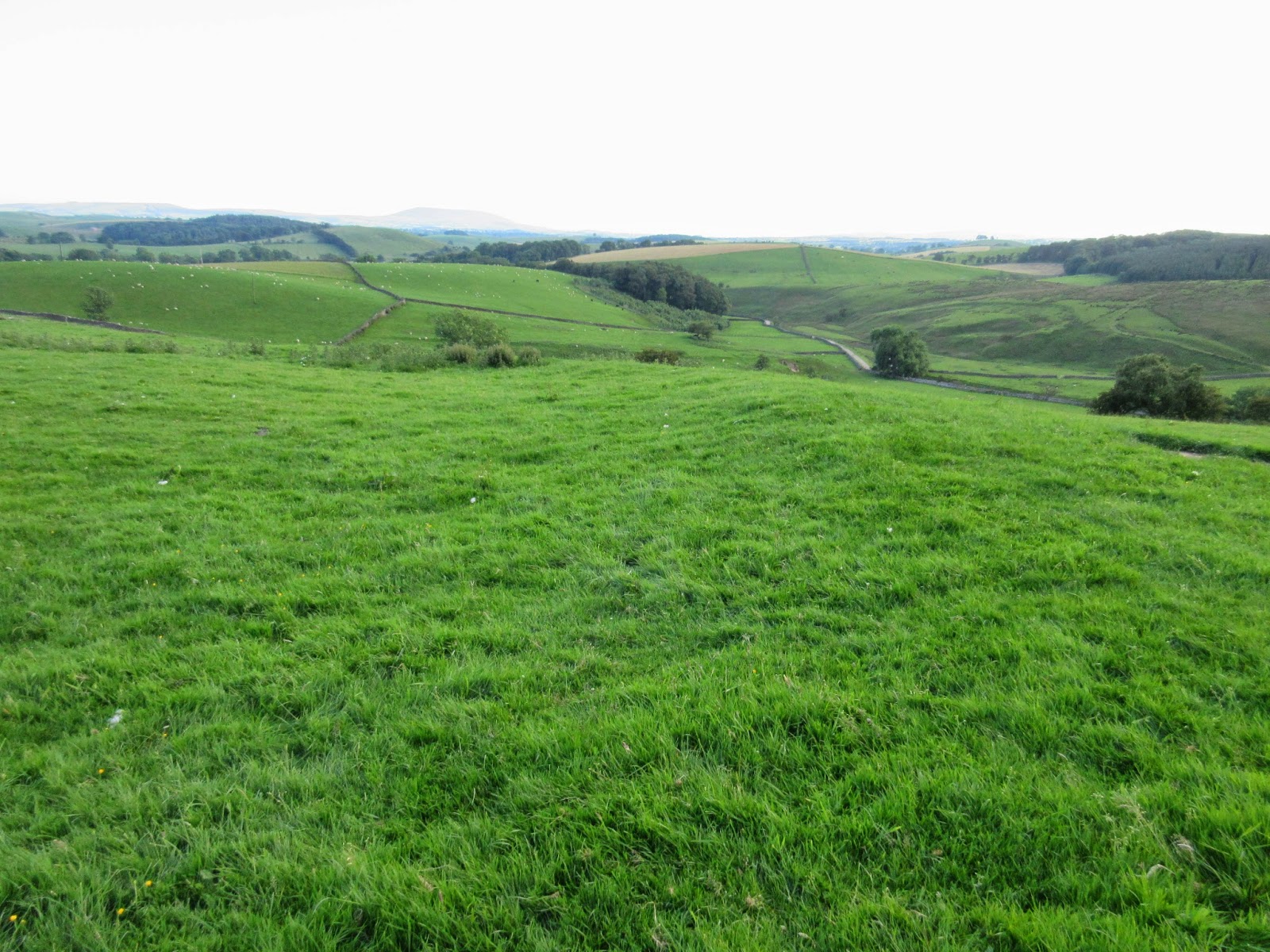 Here I am standing inside the earthworks on the summit of Park Hill - with Pendle in the distance - dominating the view as it did for the ancients.  The massive banking can be seen on the right. 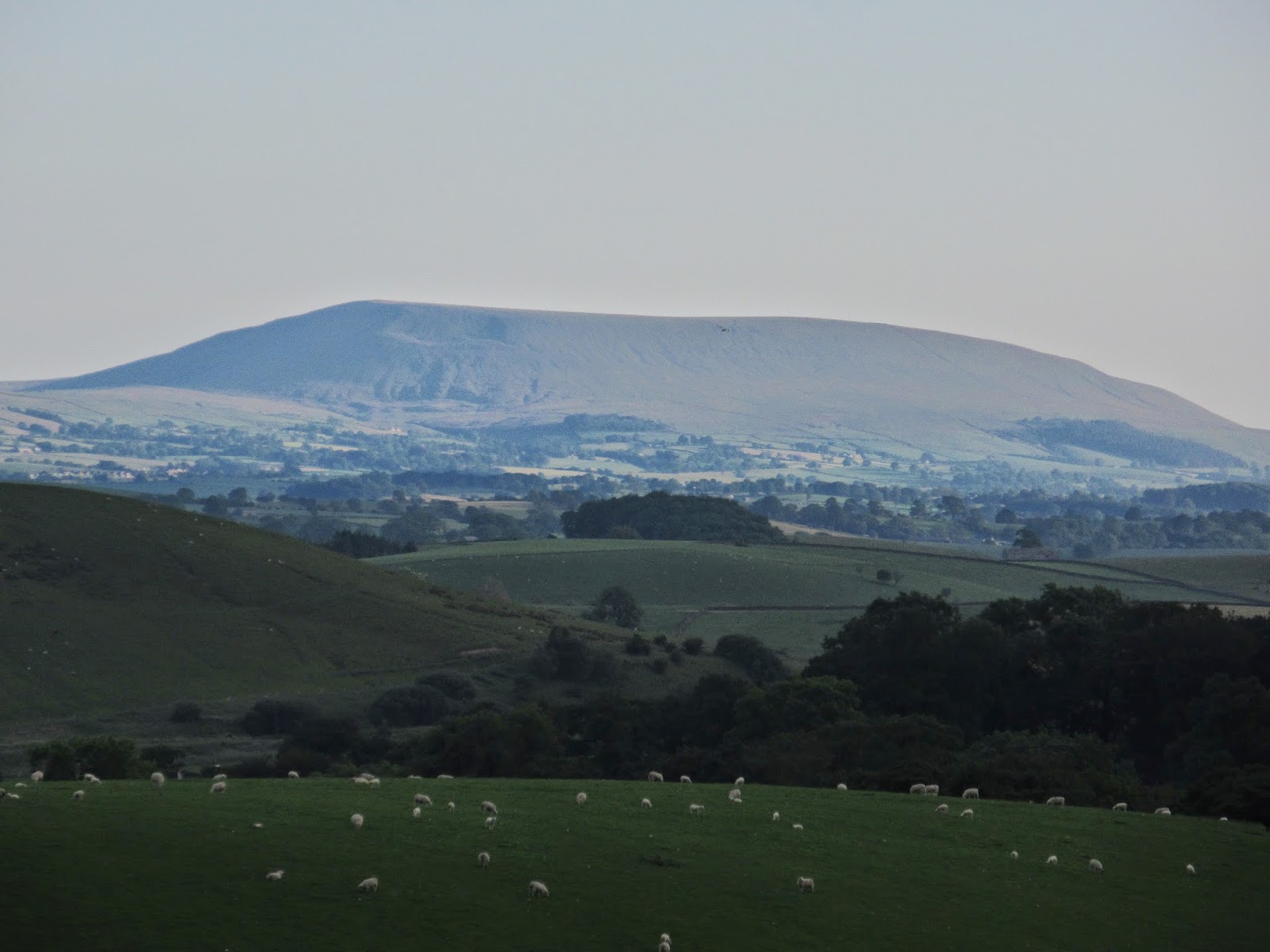 Finally - a great late evening view of Pendle Hill - zoomed in from the Park Hill earthworks site.  The hill is shrouded in myth and legend, dominating the story of the Lancashire witches.

Go seek out the ancients