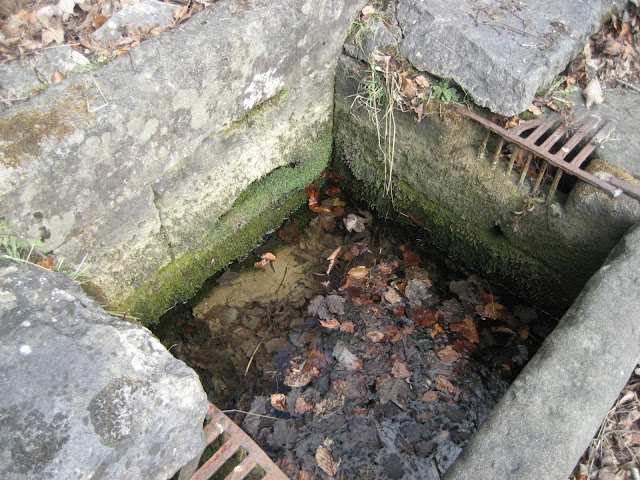 After scores of visits ... hours of sitting next to hurtling HGVs and mad bikers ... it's finally happened, folks.  The Ebbing and Flowing Well decided not to fool everybody on April Fool's Day.  For me, it was like winning the lottery.  On arriving at the well I noticed it was unusually low, but with obvious evidence on the dark green moss that it had recently been much higher.  You can see the 'maximum' some five or six inches above the water level. 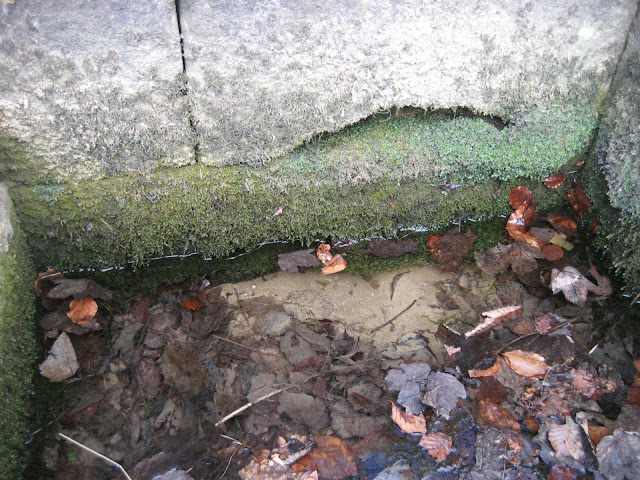 Here it is in close up.  Within twenty minutes a strange 'gurgling' sound came from the well, and in a matter of seconds it filled up before my eyes.  I was blessed.  Not even Alfred Wainwright witnessed this.  In Walks in Limestone Country he writes, 'The few people who have witnessed the ebb and flow are themselves becoming unique, while those who have watched the well for hours without anything happening are numbered in legions.'  Here we go then, Mr Wainwright:

In about an hour, the well flowed (rose) and ebbed at regular intervals about 15 minutes apart.  I placed a small piece of twig horizontally in the moss to get some idea of the change in level.  In Drayton's Polyolbion, published in 1612, the Heathen legend of the well's origin is explained, as a nymph is rescued after praying to the gods for help against a relentless wooing satyr.   The gods -

'turned her to a spring, which, as she then did pant,
When, wearied with her course, her breath grew wondrous scant,
Even as the fearful nymph then thick and short did blow,
Now made by them a spring, so doth she ebb and flow.'

Witness the water dropping five inches in a minute!

Posted by Stephen Oldfield at 13:03