Turn Dub and Footnaw's Hole
Windows into a Watery World:  An Evening Stroll in Ribblesdale 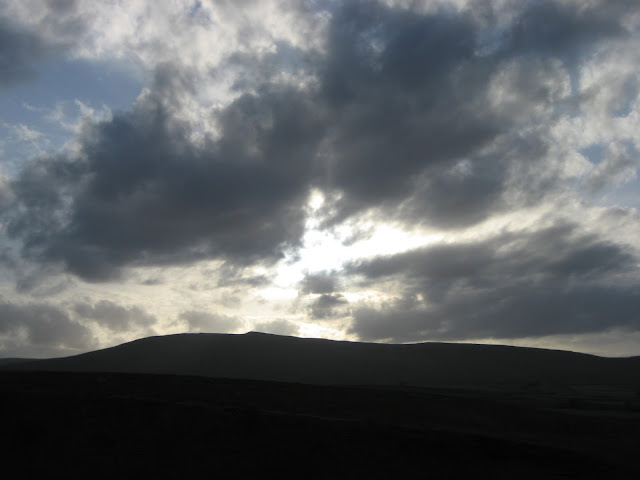 April 15th was the finest evening for a long time, so I made the most of  it after my first day back at work.  I wanted to continue the story of the same Alum Pot water that chilled my bones a couple of weeks back.  Almost unbelievably, this water next pops to the surface a mile away after travelling underneath the River Ribble!  Turn Dub is the sinister pool where it emerges, but just before that, the water plays hide and seek at the enigmatic Footnaw's Hole - whose name will shock the prudes amongst us!  I wanted to seek both of these elusive places out. 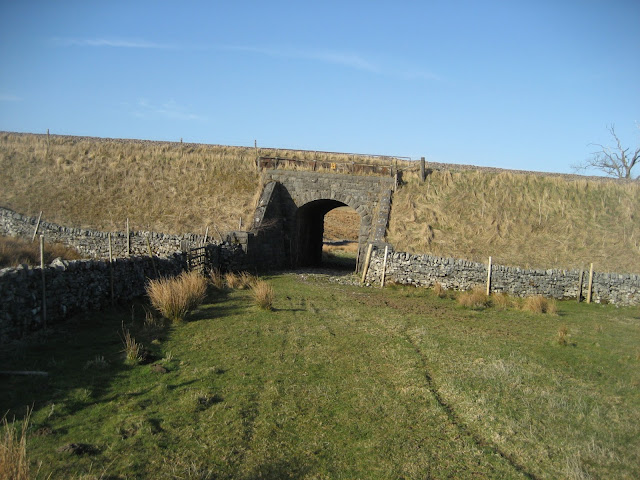 From a layby near Selside, there was at least some sign of civilisation when I passed under the Settle and Carlisle Railway.  Rabbits and hares were everywhere, and startled! 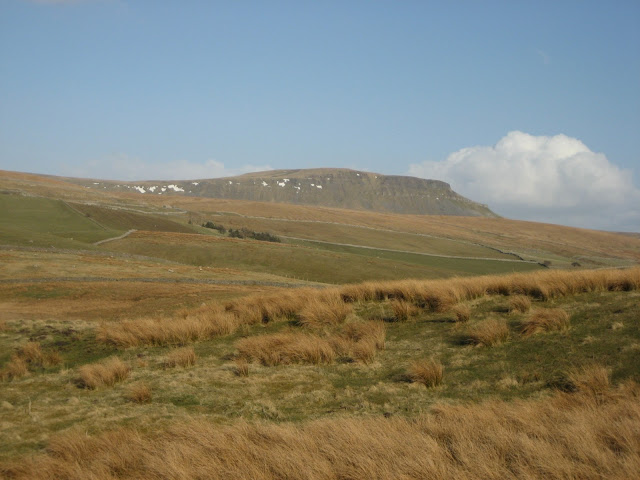 A last few patches of snow were still clinging to Penyghent, decorating the lion's back. 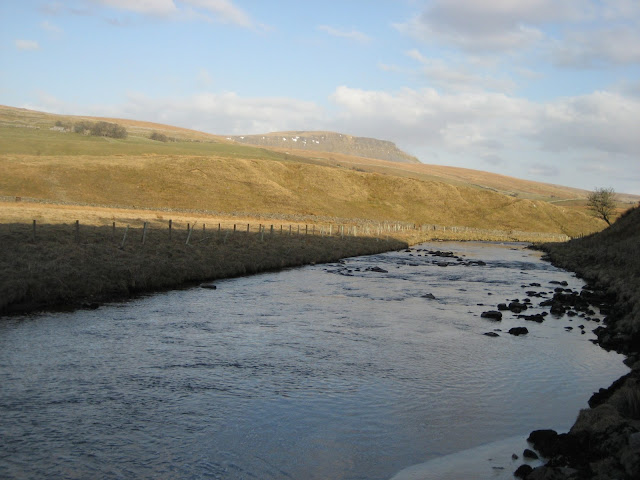 The young River Ribble is well hidden in the dale bearing its name.  I couldn't find a shallow crossing point so just waded across, as I knew great things lay on the other side. 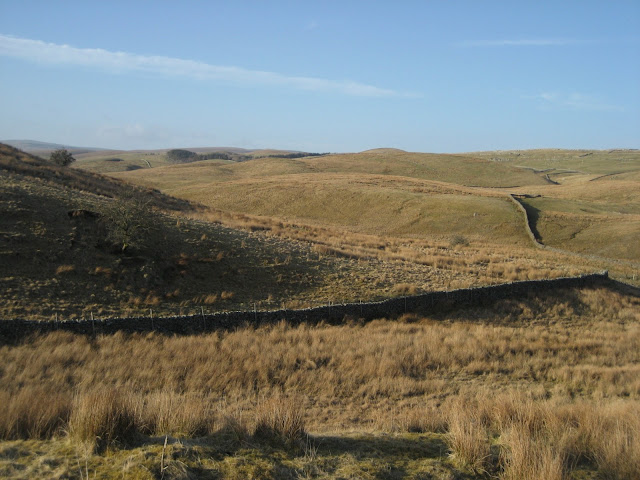 Looking ahead and to the left are the first glimpses of the North Ribblesdale Drumlin Field, the finest of its kind in Britain.  No-one is certain why these egg-shaped, asymmetrical hills occur in swarms in glaciated valleys, forming the famous 'basket of eggs' topography.  It is believed ice plastered debris and boulder clay over resistant rocks during the ice age, and rode up over the top to smooth off the surface. 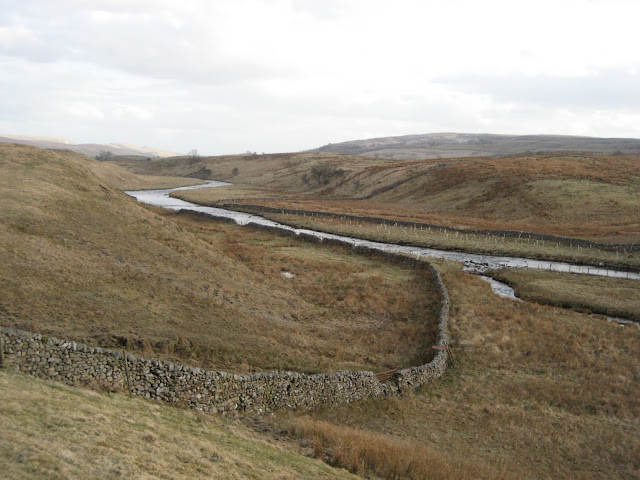 The River Ribble from the opposite bank, looking  south towards Settle.  The stream on the right is actually the Alum Pot water emerging from Turn Dub - a feature that has always fascinated me. 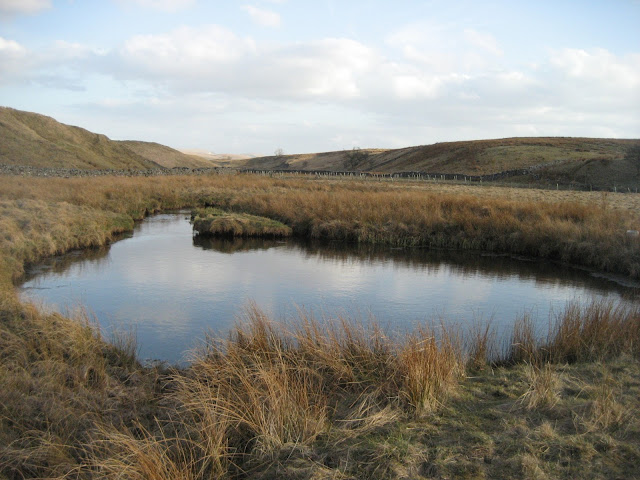 And here it is - the dark and murky pool of Turn Dub itself.  It is over 20 feet deep and fills up from underneath after the water from Alum Pot has made its final journey underneath the river bed.  Albert Mitchell, the great potholer, had his ashes scattered in the Alum Pot stream.  I could not help feeling his presence here, over a mile from the pothole.  This place has real atmosphere. 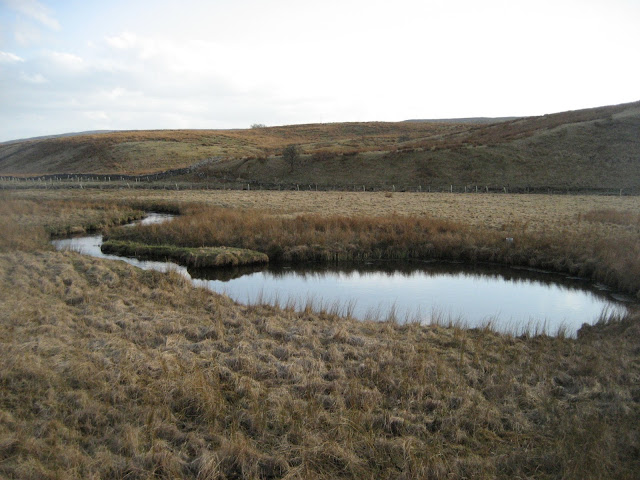 Turn Dub actually takes on the shape of a giant tadpole - even a sperm perhaps!!  This is clear from this photograph and from aerial views. 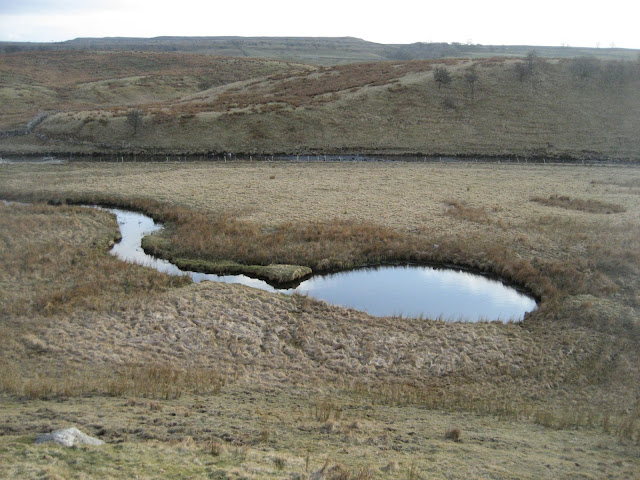 An even better view can be obtained from the hillside to the east.  The River Ribble can just be seen beyond. 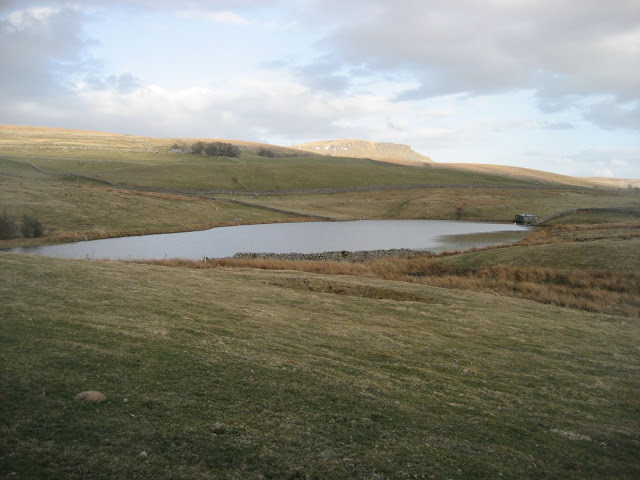 Just up the hillside is the secretive Horton Tarn.  Unusual to see a sheet of water on the limestone. 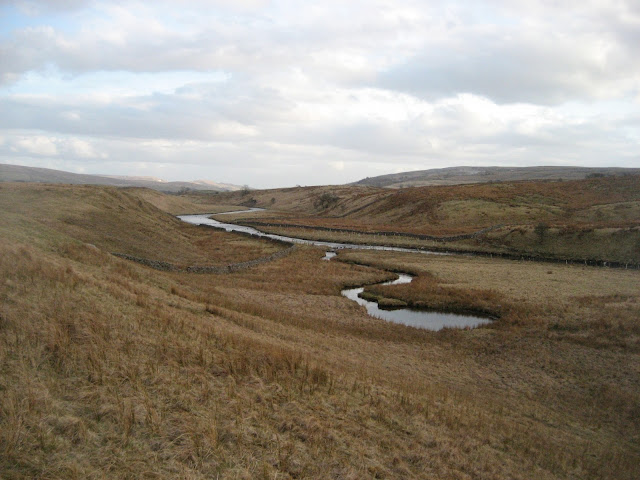 A final view back to Turn Dub - an enigmatic spot - and so very lonely. 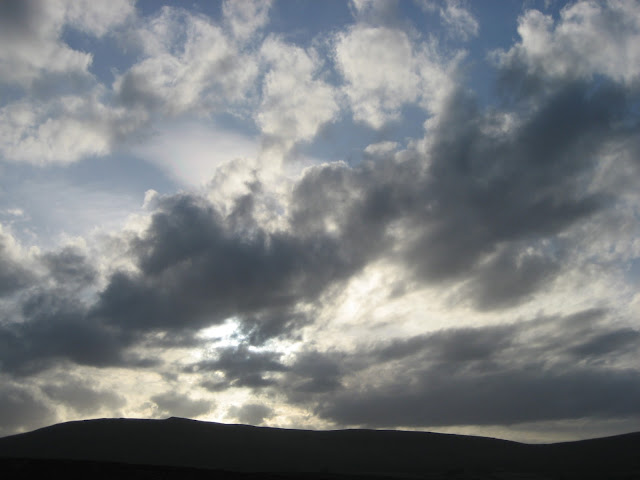 By this time the clouds on the west of the dale were blotting out the sun over the Ingleborough massif. 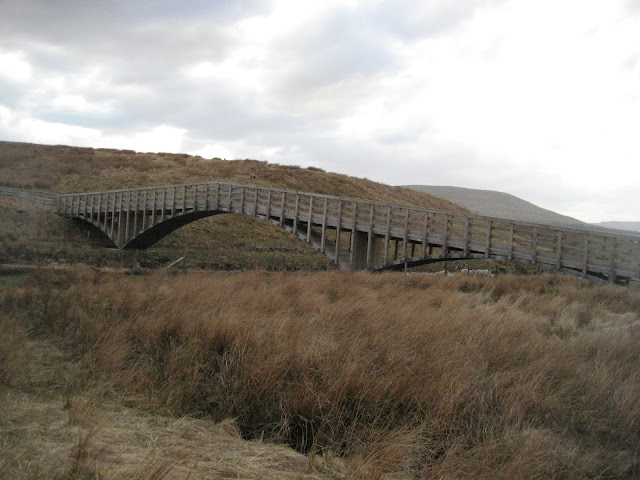 This elaborate bridge eventually took me back over the river towards Selside. 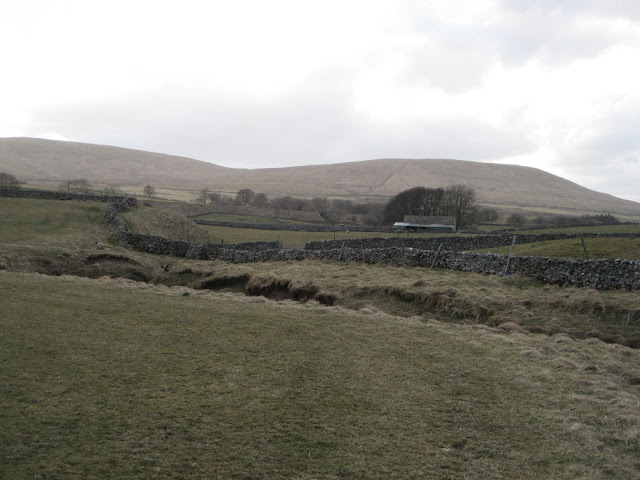 The light was dimming as I made my way to Footnaw's Hole.  This dry stream bed leads to it, and both Park Fell and Simon Fell, satellites of Ingleborough, are looming behind.  The strange name for this hole will make you chuckle.  The field over the wall to the right was labelled on a 19th century map as 'Foot and Arse' enclosure.  It's not difficult to see how North Yorkshire pronunciation shortened it to 'Footnaw's' though more than one local has even suggested 'footnaws how deep yon' ole is.'  !!!  Behave yourselves ... 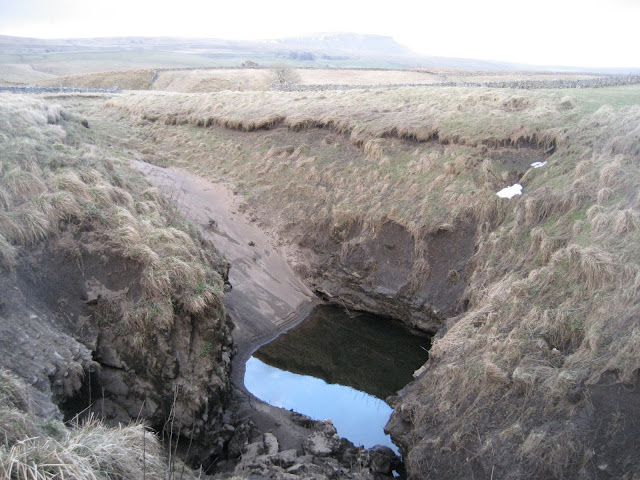 Joking apart, this 'window' is the first, and last time we see the Alum Pot water before it makes its way underneath the river to Turn Dub.  The dry stream channel to the left is there for a good reason.  In flood, the underground passage beneath the river can't take all the water to Turn Dub so Footnaw's Hole fills to the brim and flows off down the channel to join the river.  I'd love to see it in flood, and aim to come back when it's really wet. 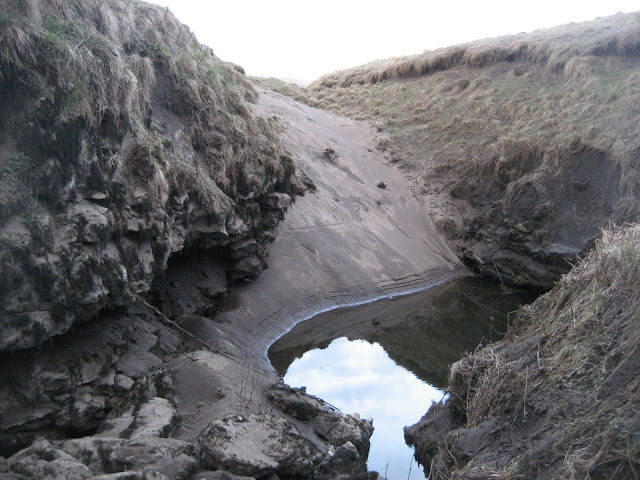 This is just one weird place.  It was still.  It was deathly silent.  The sinister sand slope plunges into deep, dark water. 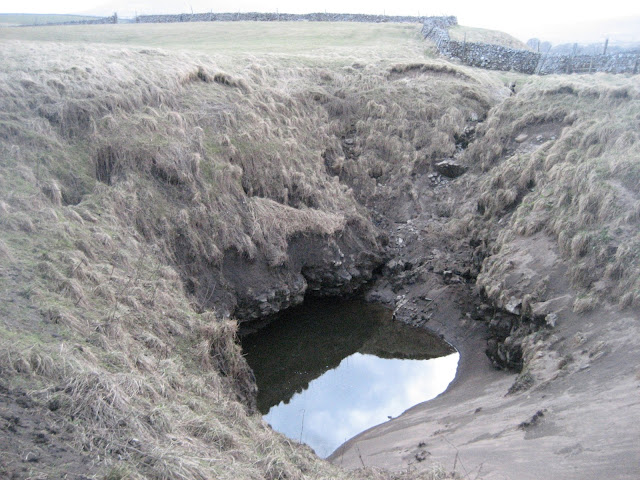 Footnaw's Hole from the opposite bank.  It can be seen that, in times of flood, a waterfall pours into the hole itself, as indicated by the channel. 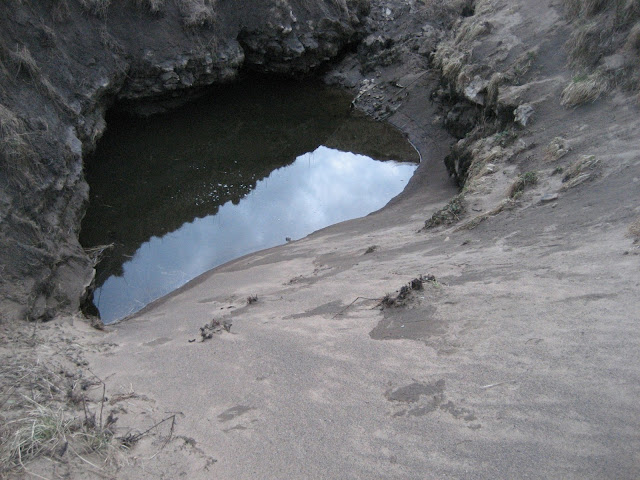 A view down the treacherous sand slope into the hole.  Definitely best avoided. 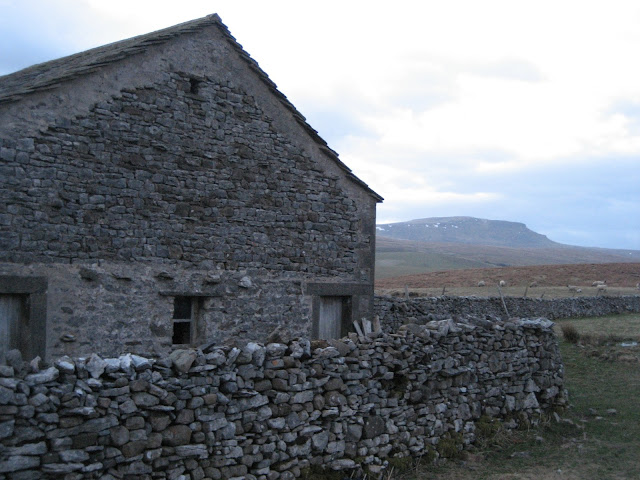 My last picture was a lot friendlier.  A cosy Selside barn with Penyghent for company.

Both these wonderful watery holes can be reached from the hamlet of Selside, north of Horton-in-Ribblesdale on the B6479.  A lane drops down by Selside cottages from which Footnaw's can be visited.  Crossing the smart wooden bridge and walking on the opposite bank will take you to Turn Dub, and save you an unnecessary soaking.