In Search of the Kinsey Cave Bear 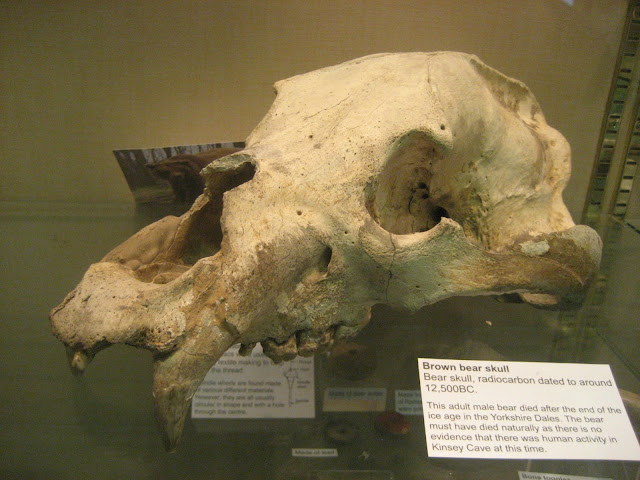 W. Kinsey Mattinson of Austwick gave his middle name to this cave in Giggleswick Scar, which he spent years excavating - and why not?  It's not many people discover objects like this in an average life.  This bear skull, dug out of the cave sediment, is an incredible 14 000 years old!  It is now on show in the Craven museum in Skipton  - but the cave that produced it is even more exciting ... 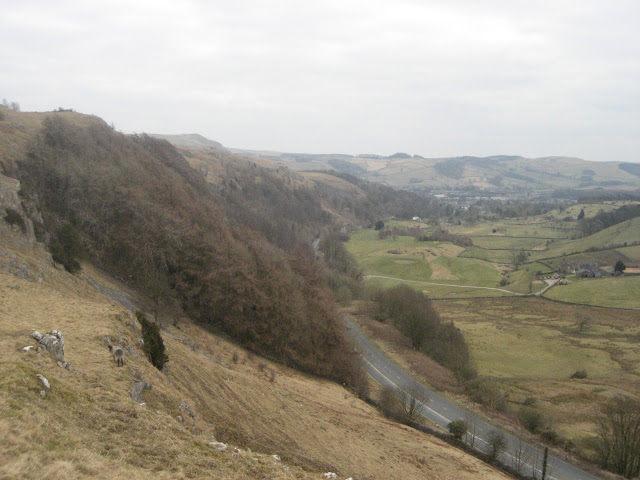 I parked opposite Scar Top Garage at Buckhaw Brow, not far from Settle.  Wandering onto the fell and turning right - I was greeted by this terrific view of Giggleswick Scar - one of the great views of England.  The South Craven Fault, which began to move some 300 million years ago, caused the mass of land to the right to slip down in relation to the land on the left, which was exposed as a series of cliffs.  Notice the farm on the right? Well, buried far beneath it is the same limestone that once lay level with the top of the cliffs on the left.  Incredible things have happened here - and the fault is still active!!  Earth tremors were felt in Settle in 1947. 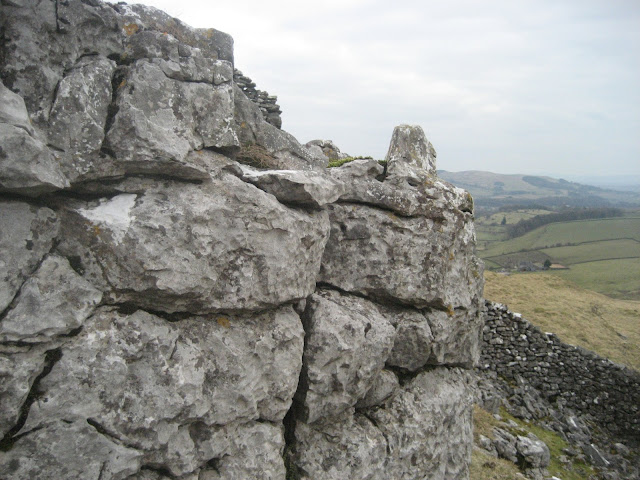 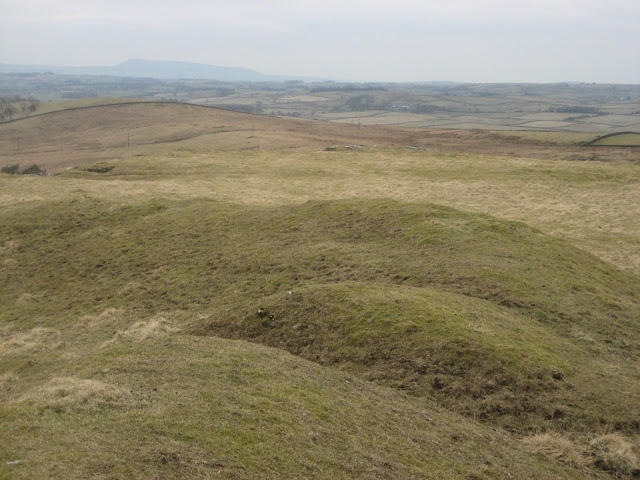 Just left of the path before turning right over the Scar are these 'chambers' - clearly with much to be discovered.  That's good old Pendle Hill in the distance, soaring over the Craven lowlands.  These lowlands once marked deep water beyond shallow lagoons in which the limestone was forming. 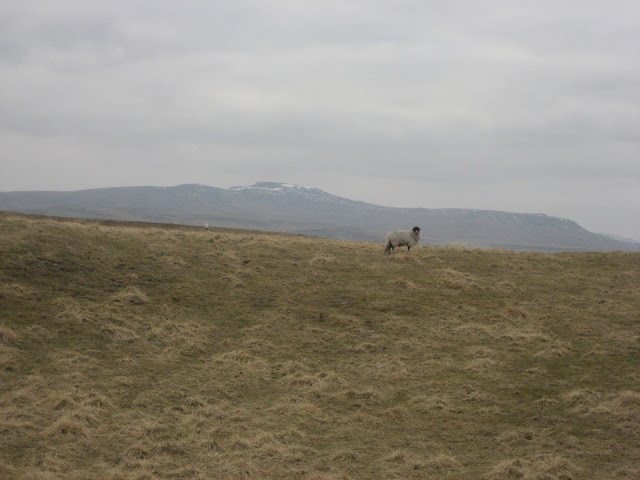 I quickly saw this opportunity to my left when Ingleborough and a nosey sheep presented themselves in perfect harmony .... wish I'd used my zoom in retrospect ... 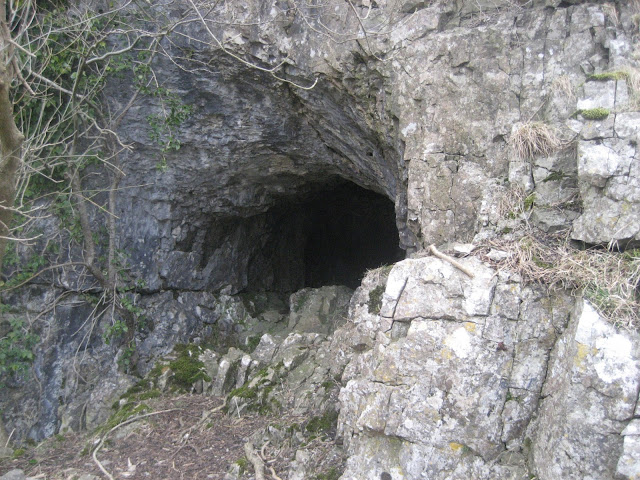 Peering over the wall to the right are the partly mined Buckhaw Brow Caves which, according to Northern Caves, lie on a barytes string - a source of the mineral barium. 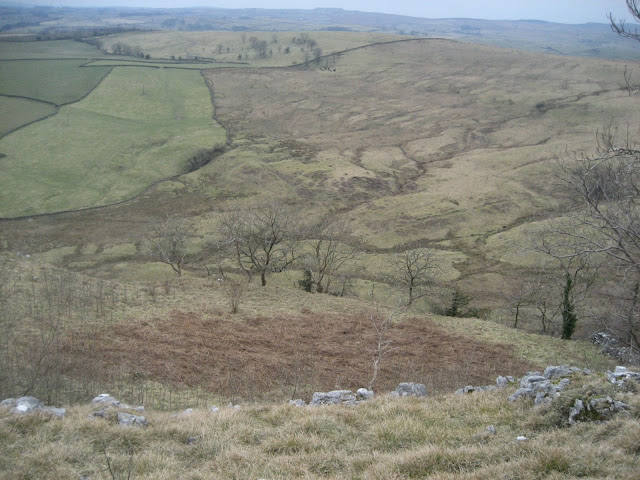 The trees mark the cliff edge and the drab fields below hide a special secret.  Here, until the mid 19th century, lay the ancient Giggleswick or Huntsworth Tarn, before being drained in 1837.  What a pity they can't bring it back.  A sheet of blue water with these cliffs behind must have been unforgettable. You can still see the stream channels that flowed into the tarn. 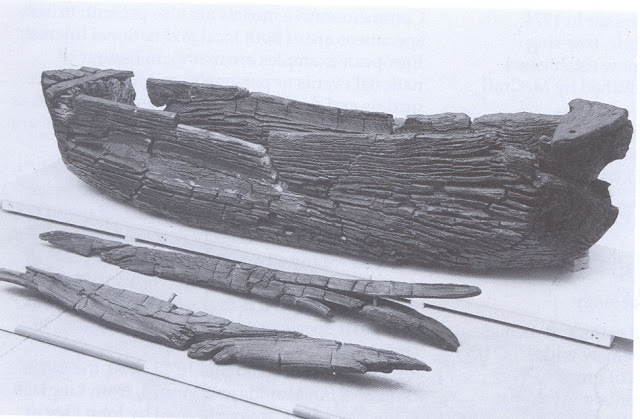 One advantage of the drainage was the discovery, in 1863, of this magnificent log boat or canoe - complete with paddles and carved from  a single ash tree. Originally believed to be over 2000 years old, it has since been dated to the 1300s so is in fact medieval.  With it were parts of a primitive anchor, and it was buried five feet below the surface.  Ironically, it was shattered by a direct hit from a German bomb in Leeds city museum in 1940.  Experts have pieced it back together and it is now on show in the Leeds Museum Discovery Centre. 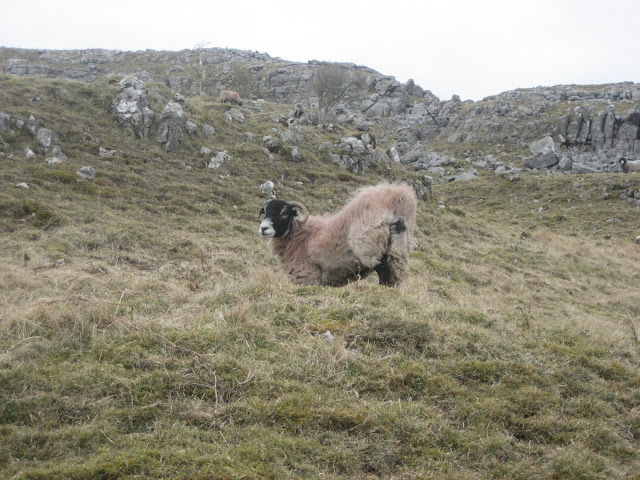 Some of us don't care a baa about canoes - but more about Oldfields wandering on our territory ... 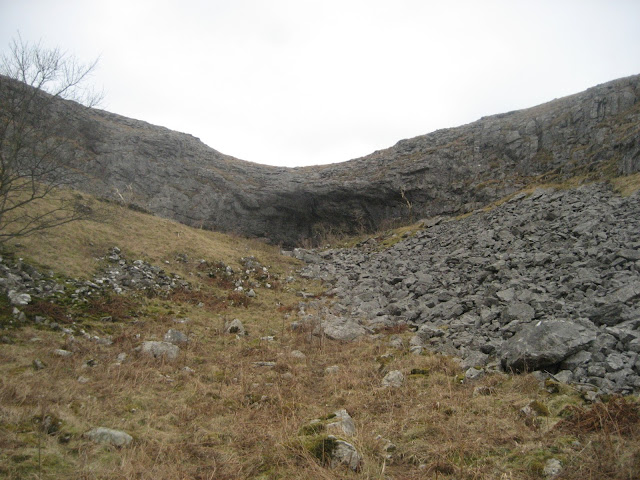 A dry valley turns up to the promised land - the spot where Kinsey cave lies hidden under the scar.  The eroded lip of the scar gives away that, when the cave outlet was flooded - water once poured in spectacular fashion over these cliffs. 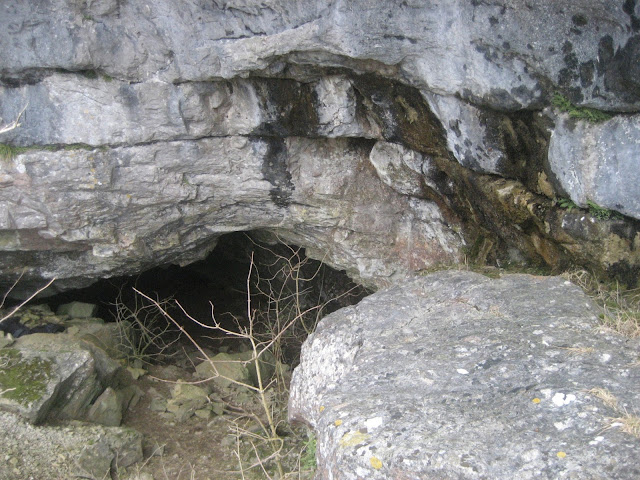 Only at the last minute do you see the entrance - and an imposing one it is too. 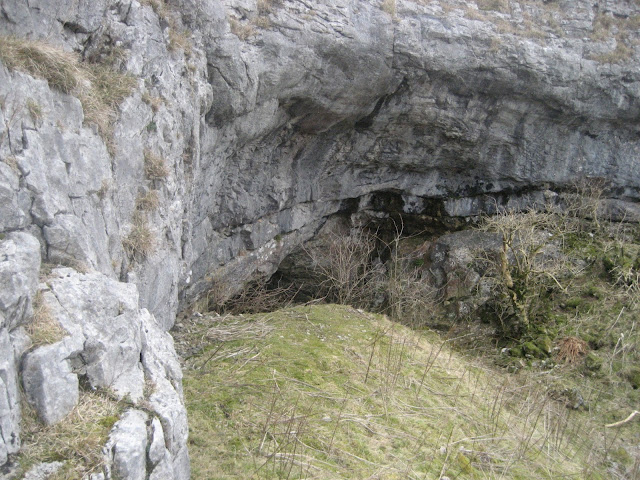 W. Kinsey Mattinson's spoil heap can be seen in the foreground.  Notice the undercutting by an ancient waterfall at the base of the limestone. 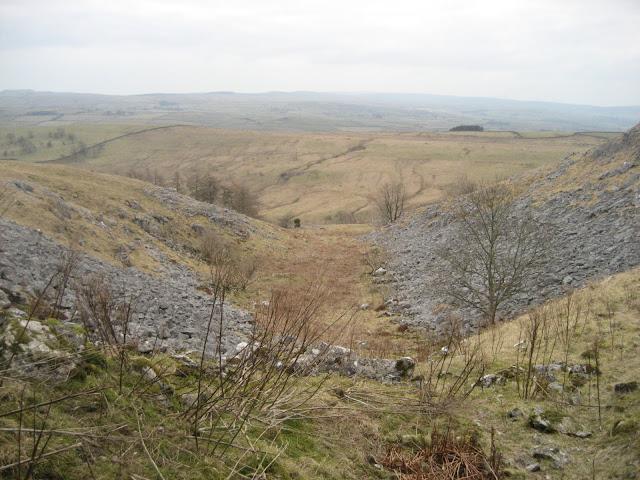 The now dry valley shows the extent of the water that poured out of the entrance and over the fall at the end of the last ice age, when the ice at this level was melting.  As the whole ice sheet melted, the water found new escape routes in the valley below.  Notice the scree caused by freeze-thawing of the ice. 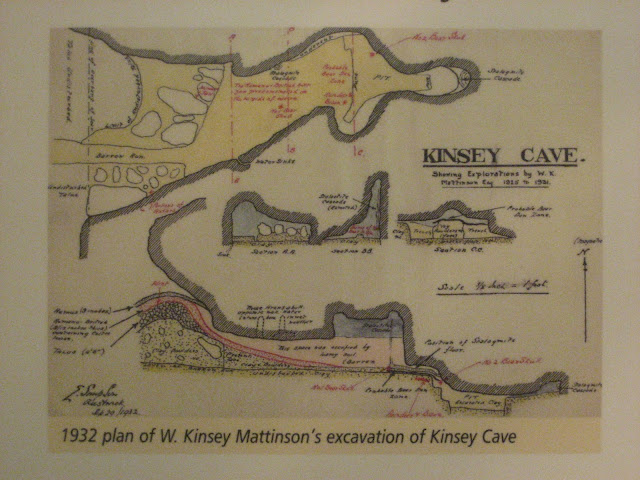 Mr Mattinson made this lovely colour survey of his beloved cave.  The red writing at bottom centre indicates the exact position of the cave bear's skull. 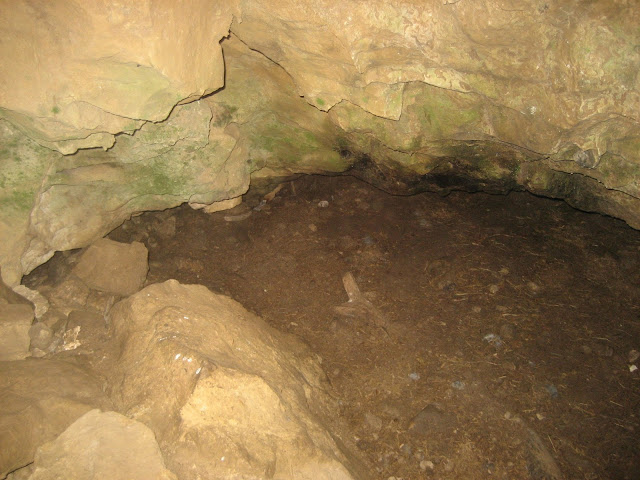 And this is more or less the spot in which it was discovered.  Imagine dragging that up through the debris!  It's hard to believe this animal lived and died here. 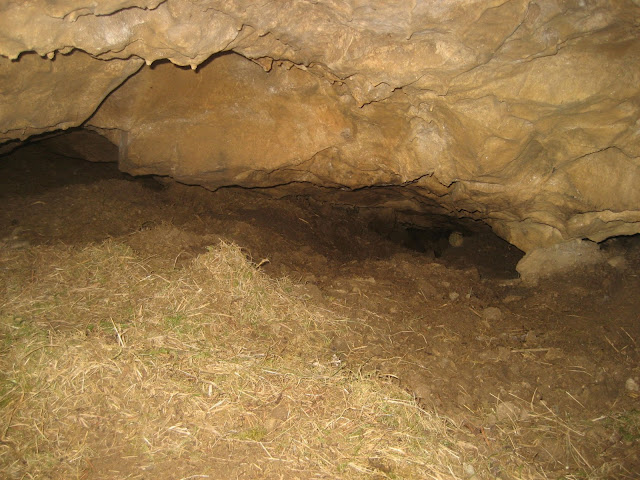 Badgers now utilise the cave.  A good thing, in that their activities have unearthed many human bones in recent years - a bad thing in that no-one wants to disturb the badgers by carrying out further investigation!! 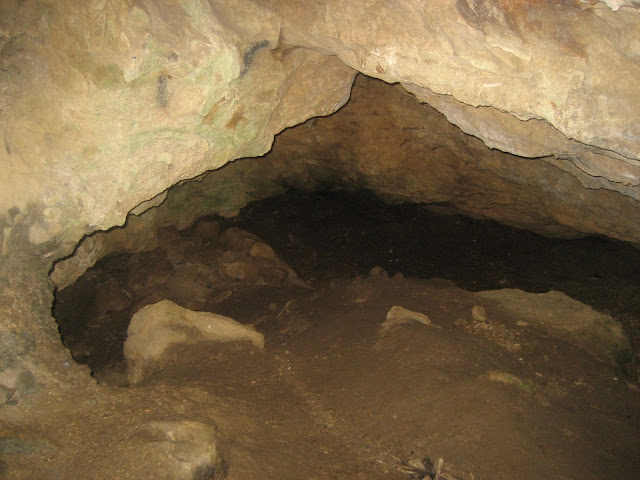 The arrow at top left may well be a mark made by excavators to point out an object as the cave floor would once have been level with the arrow's position. 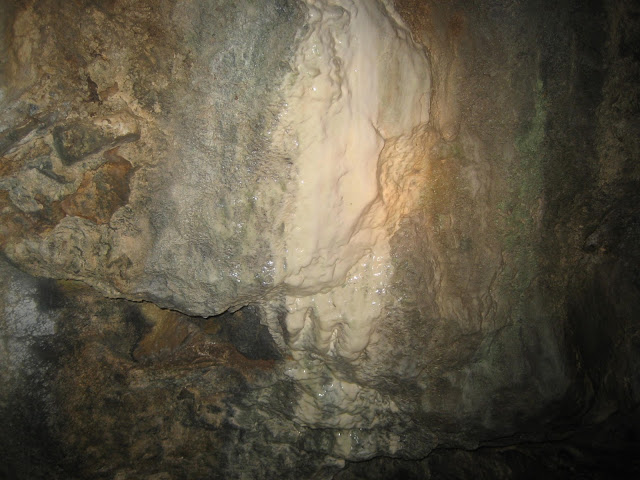 Despite Kinsey being a largely dry cave, there are some lovely developing dripstone features. 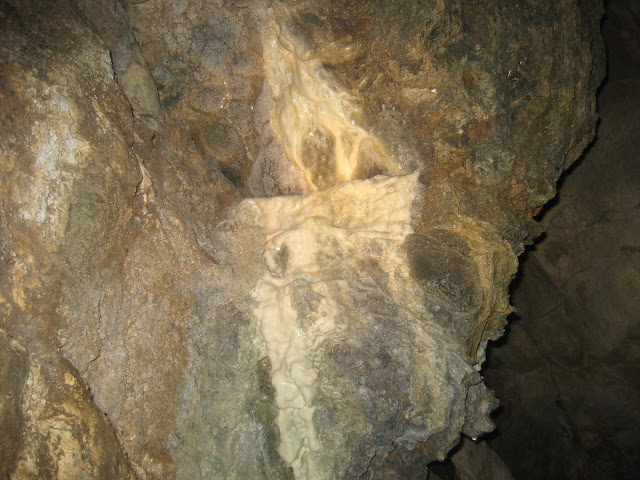 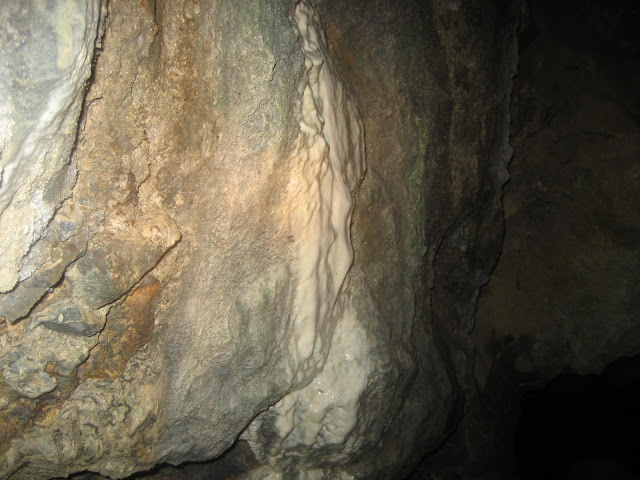 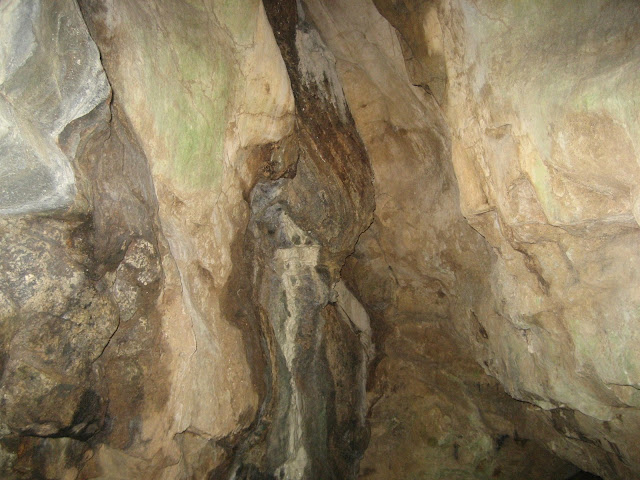 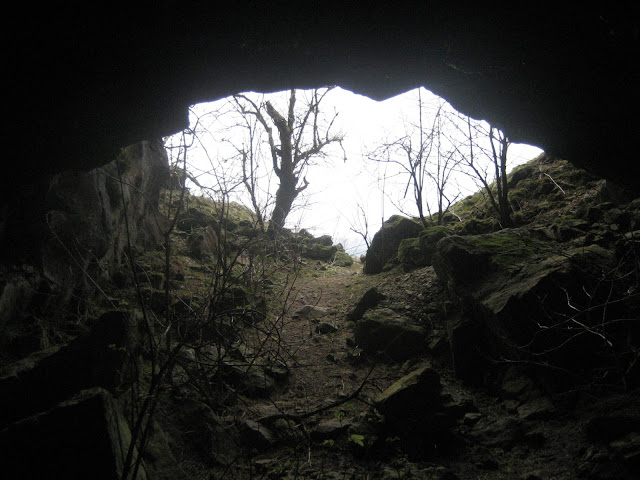 And the view out has a real caveman's feel to it.  A textbook example of a prehistoric home. 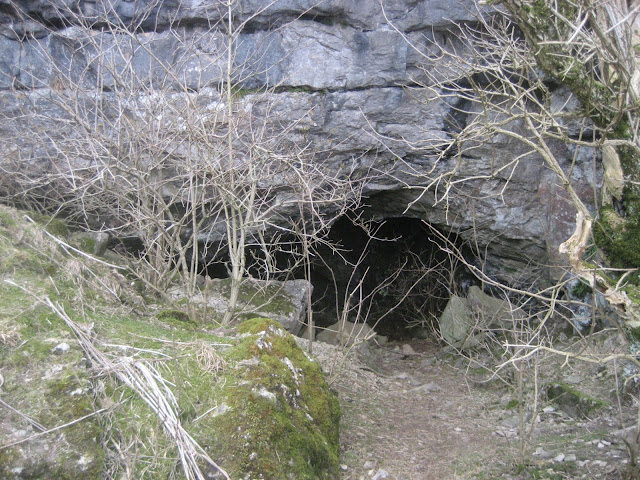 Farewell for now - but I'll be back.  Kinsey Cave is the kind of place to sit and linger for a long time. 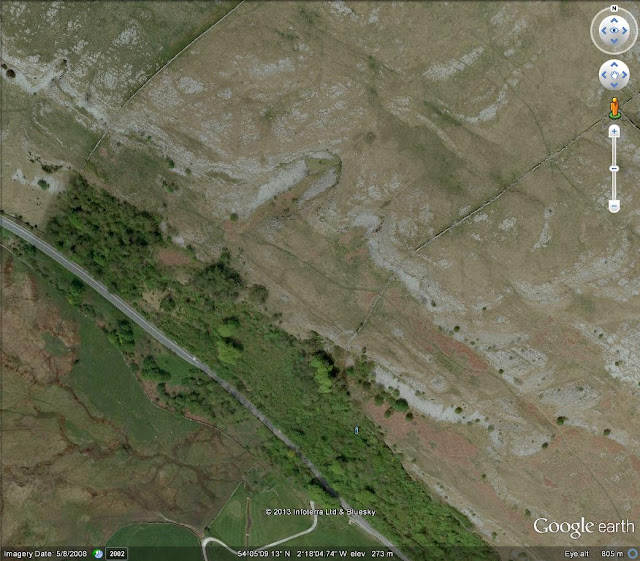 Kinsey Cave from the air - the obvious horseshoe shaped feature just above centre.  The position of the ancient tarn is at bottom left.

Please let me know if you enjoy your Kinsey cave experience.  I would love to hear from you.