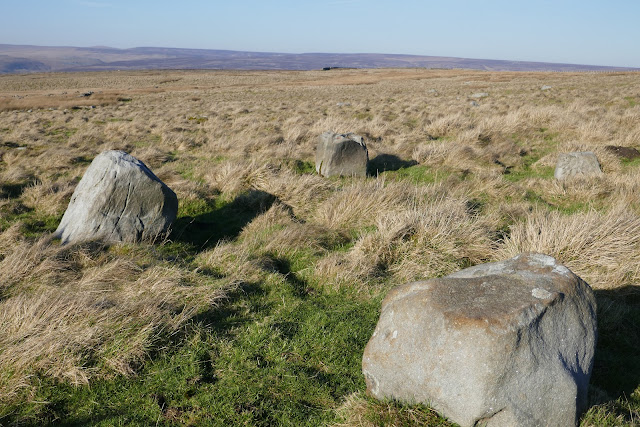 The Fancarl Stone Circle (SD064631) deserves to be much better know than it is.  Tucked away in the eastern extremities of Wharfedale, this enigmatic site repays several visits to get a good understanding of what was going on here some 3500  years ago. 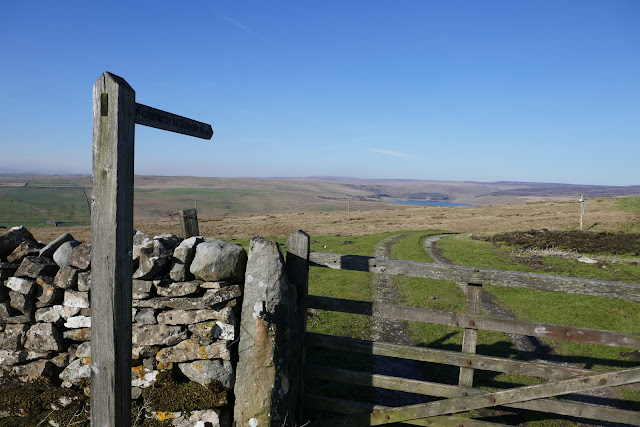 It was a beautiful day when I visited.  This sign points off the B6265 towards Grimwith Reservoir.  Just further along the road towards Pateley Bridge is a mast - with the circle lying in a field just to the north; a two minute walk. 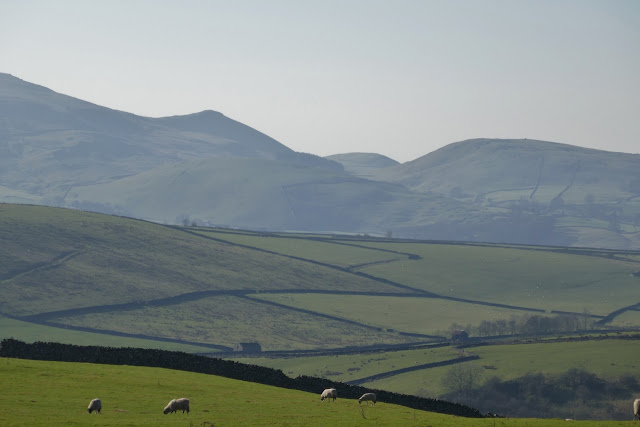 Stunning view back to the reef knolls of Kail Hill (centre in shadow) Elbolton (right) with Butter Haw and Stebden behind.  These were once reefs separating shallow and deep water in a warm tropical sea.  Elbolton is well known for its archaeological activity, and it is safe to say that these knolls played a part in the placing of the stone circle.  The landscape itself may well have represented the Mother Goddess: a pregnant woman reclined on her back. 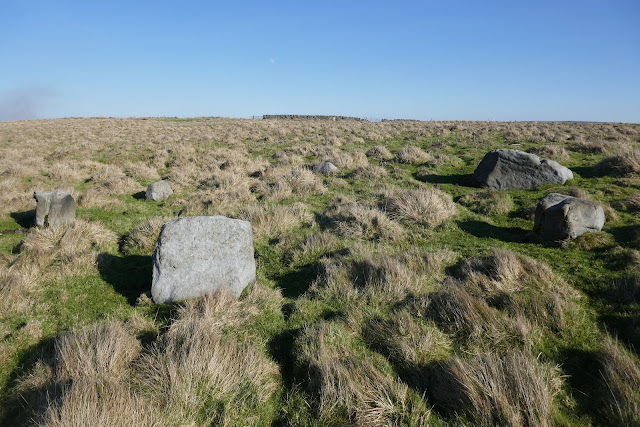 Here she is: a little beauty dating probably from the early Bronze Age.  One stone appears to be naturally situated (top right). 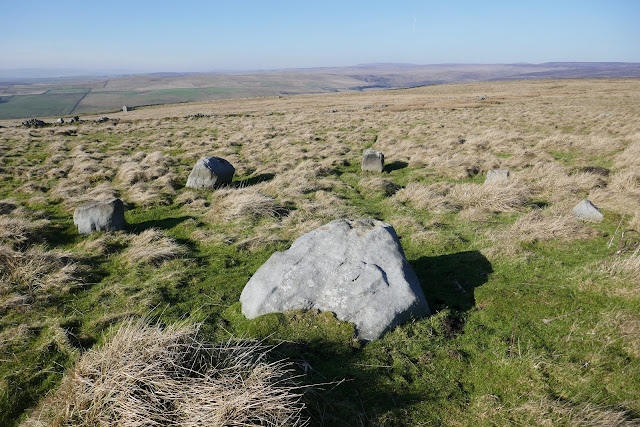 It is likely that this stone  had great significance to the ancients - not only because it is larger than any other in the vicinity ... 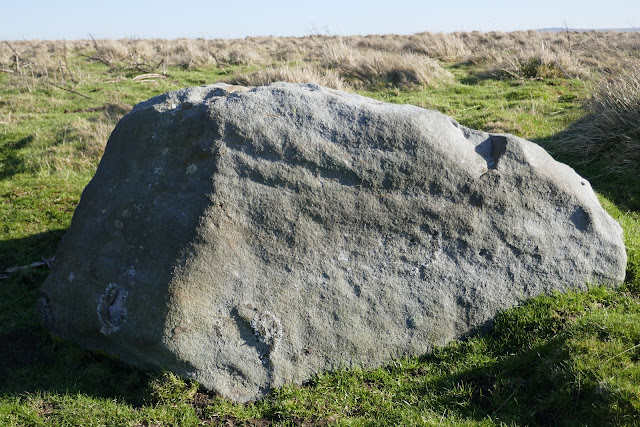 And therefore served as a prominent marker for the other stones to be gathered round ... (note the lateral bandings which appear to be carved onto the stone in this photograph) 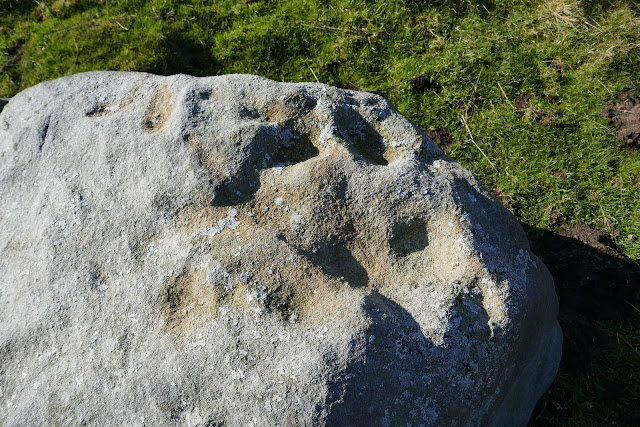 But also because of the cup marks etched into the surface of this huge piece of gritstone. 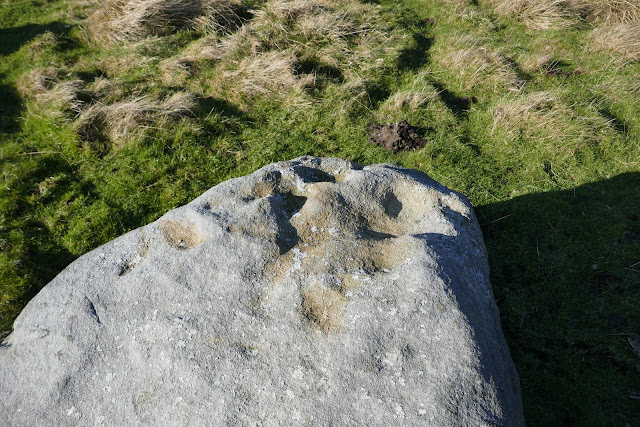 Despite years of research and speculation - we are no nearer to knowing what cup marks were than were the Norse settlers who came into these parts some 2000 years after they were carved. 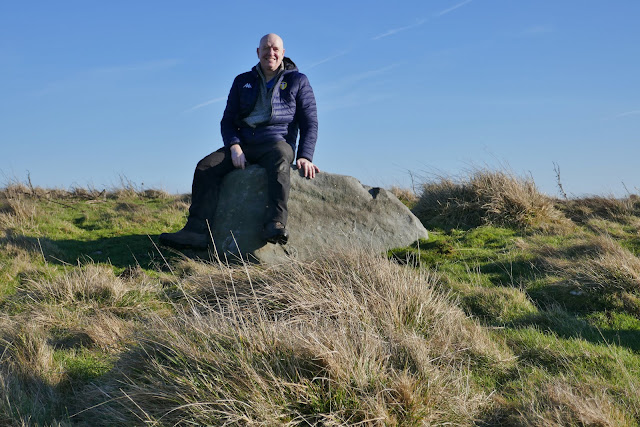 Me and the Fancarl stone - as I like to call it. 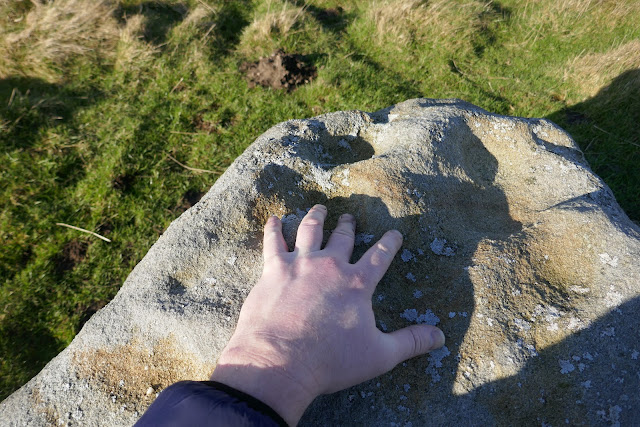 The cup marks are quite large compared to others in the Pennines. 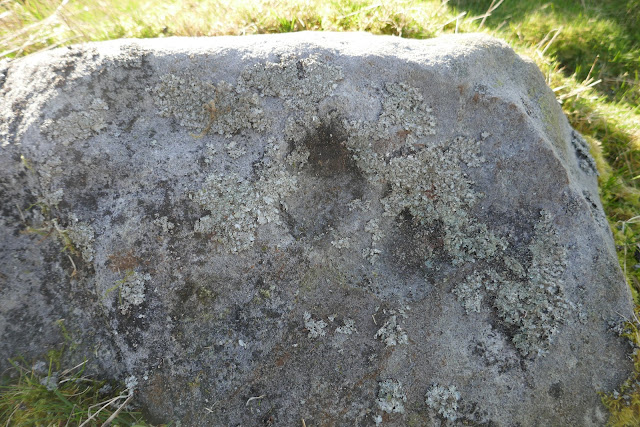 Heading due north-east from the circle - in the direction of the summer sunrise - is another cup-marked stone; clearly important to this alignment.... 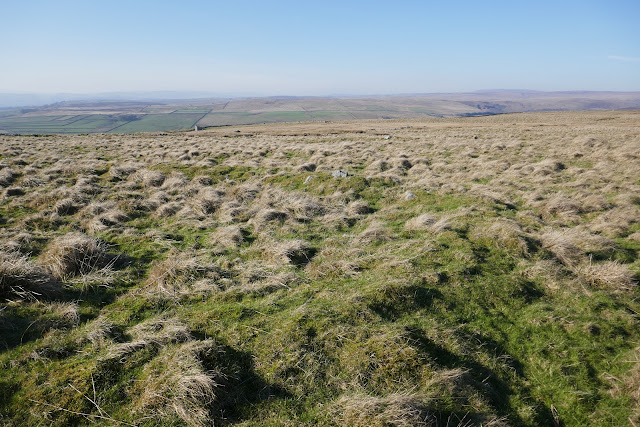 And, in the same line - this superb ring cairn (you can see the semi-circular curve of green grass just right of centre).  I am more tempted to think of this as a Bronze Age burial cairn rather than a settlement.  It is easily visible on aerial photographs. 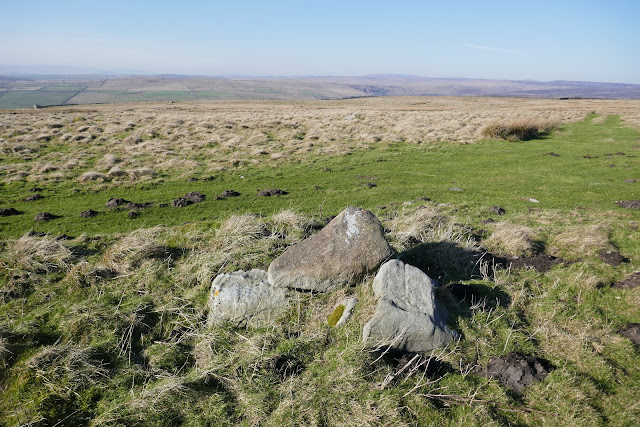 Most fascinating of all - a few yards further on along that same summer sunrise line - is this ruined cairn .. 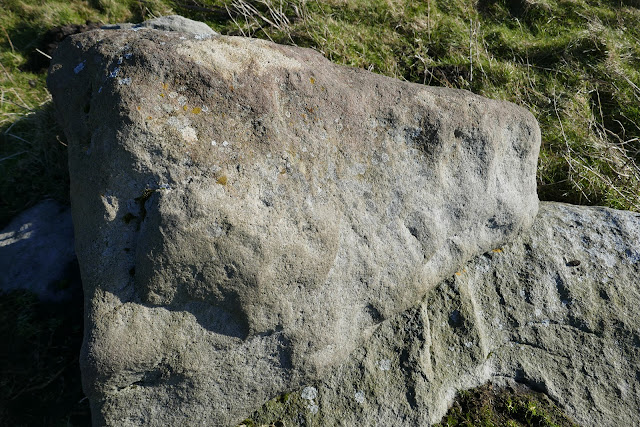 The main stone has fallen but has been definitely shaped by early man - and probably marked the position of the rising sun as seen from the centre of the Fancarl circle. However, these stones may have been cleared and it is possible they don't lie in their original position. 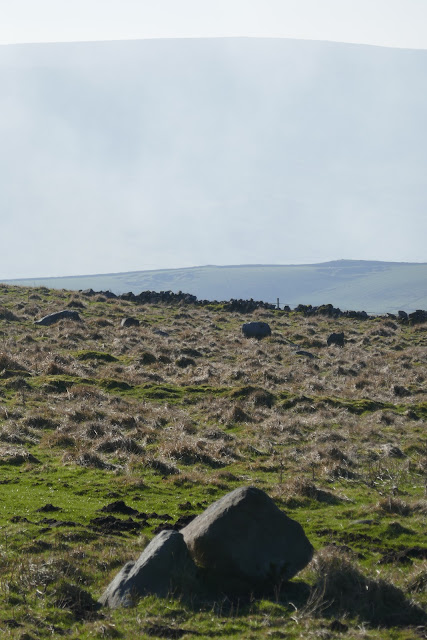 This shot shows the alignment using zoom.  The fallen stone cairn in the foreground, the curve of the 'ring cairn' at centre - and the lovely stone circle beyond.  What we have here is a sacred late Neolithic/early Bronze Age landscape known to very few. 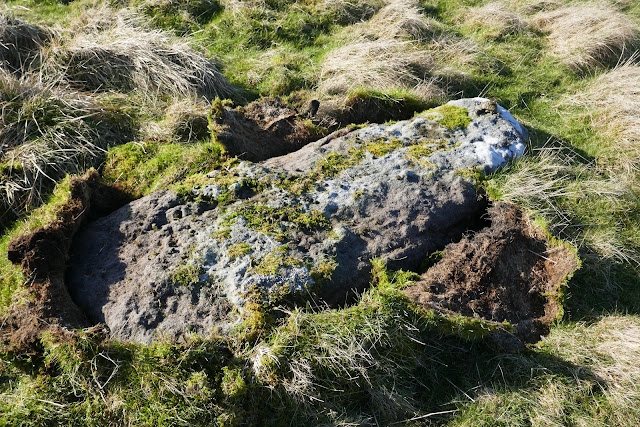 I looked around from the centre of the circle for anything that marked the setting sun - having transcribed an arc in the sky from the sunrise point.  Sure enough, in the line of sight was this huge collapsed stone which appears to have faint cup marks and again has been considerably shaped for the purpose.  It was nearly buried beneath the turf.
. 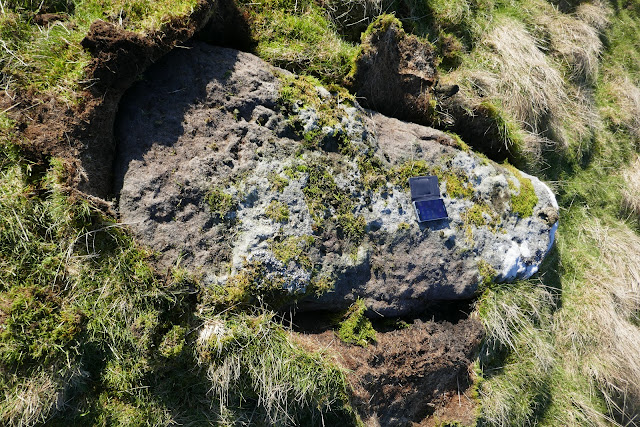 Another view with my mobile phone for scale.  Perish the thought of this gadget near such a beautiful stone - but I didn't have a coin!  I replaced the turf later to protect the stone. 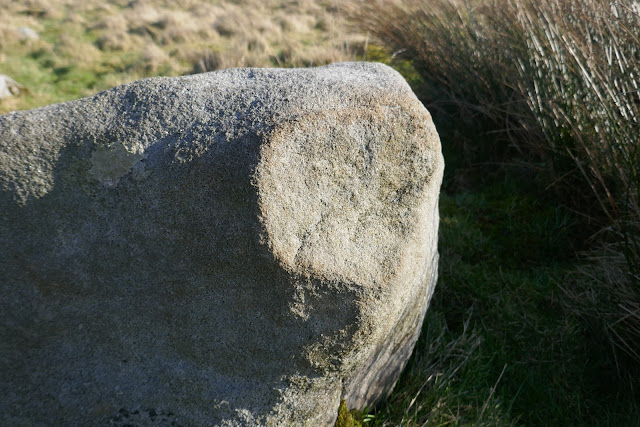 The area oozes intrigue!! Look at this little beauty! Was it originally covered with a face or design?  It has certainly been 'shaped' in some way.  When I squint - I can see the faint outline of a head ... 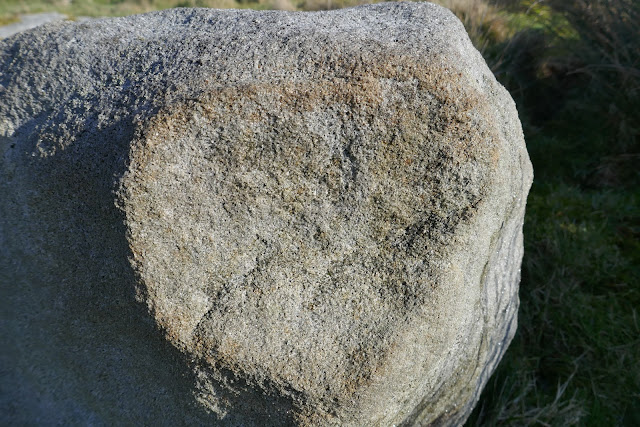 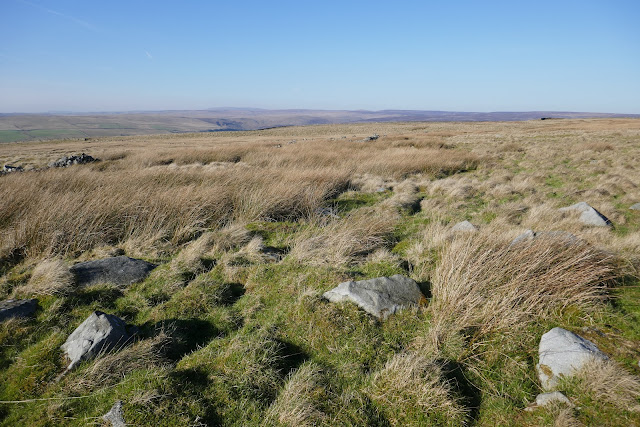 To the north-west this group of stones marks another possible cairn. 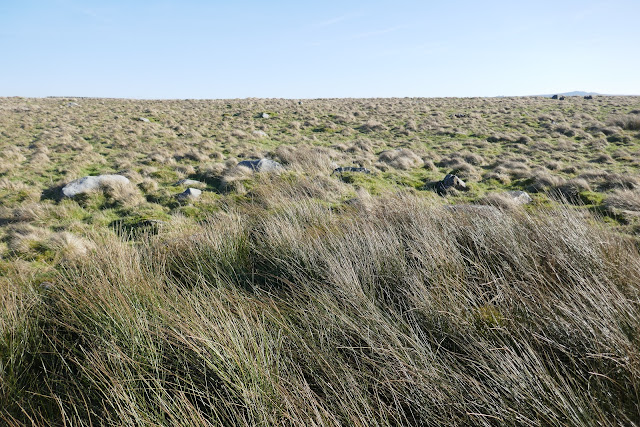 Looking to the surrounding ring of the cairn from the rushes in the centre.  There are many disused shafts on the moor which might be confused with prehistoric features - so care is needed - and a trained eye. 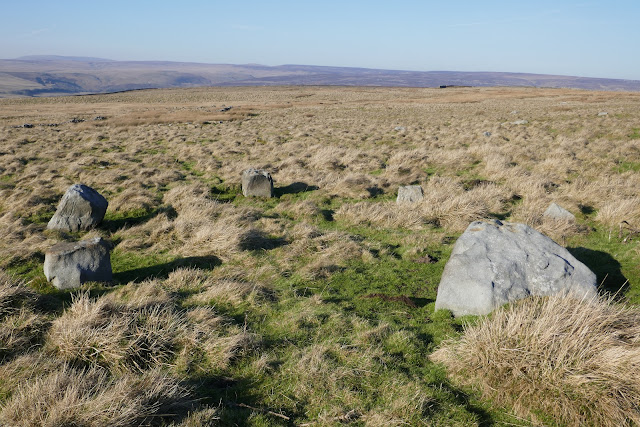 The circle itself has six stones visible - with others hidden below the springy turf.  The views all around are sensational. 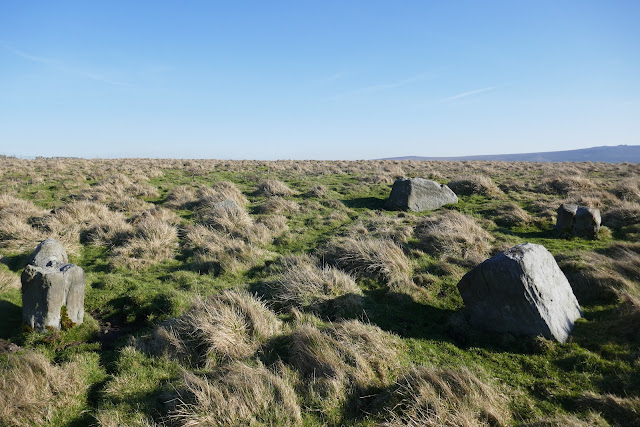 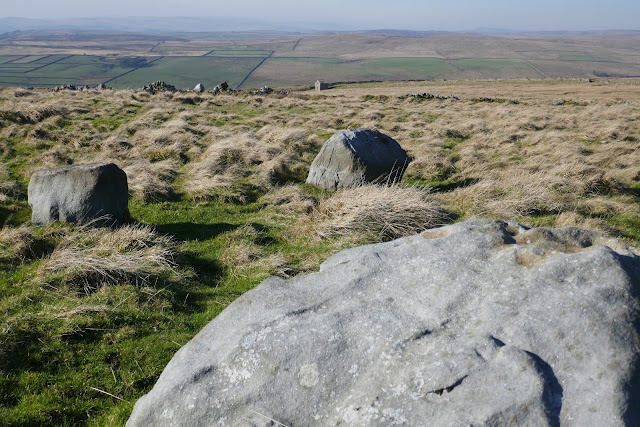 A place to sit and reflect on what life really means - and on what the people of the past were thinking.

Posted by Stephen Oldfield at 13:56