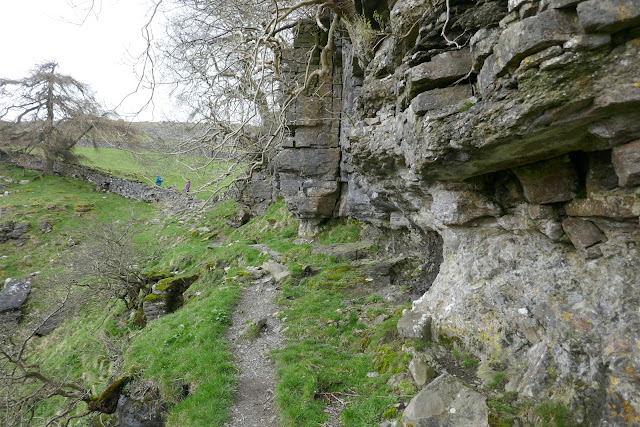 A huge slice of the basement rocks of the Dales has been brought to the surface by the North Craven Fault, and further exposed by erosion.  Nowhere is this better seen than at Nappa Scars, just north of Austwick.  Here, the 350 million year old beds of Great Scar Limestone rest on the basement rocks - the eroded stumps of a former mountain range,  formed under the sea over 400 million years ago.  It is one incredible place! 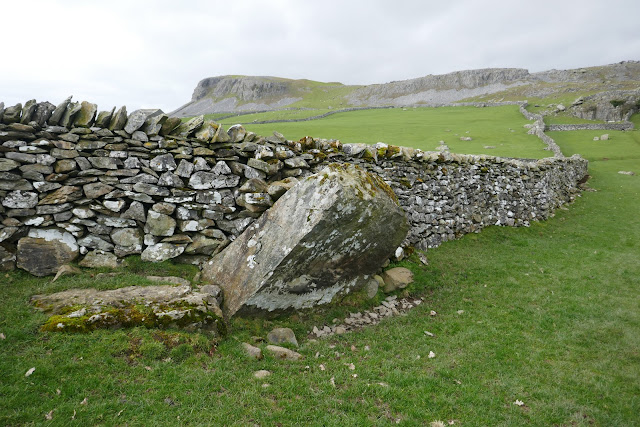 A lovely walk up from the village sees the scattered erratic boulders of the Austwick Formation (from the Silurian Period so slightly younger than the Nappa Scar basement outcrops), providing convenient short-cuts to drystone walling.  These famous boulders were plucked from the valley sides about 1 kilometre to the north at SD770704) and dumped both here and on Norber Brow, where they lie as one of the most famous geological locations in the UK. 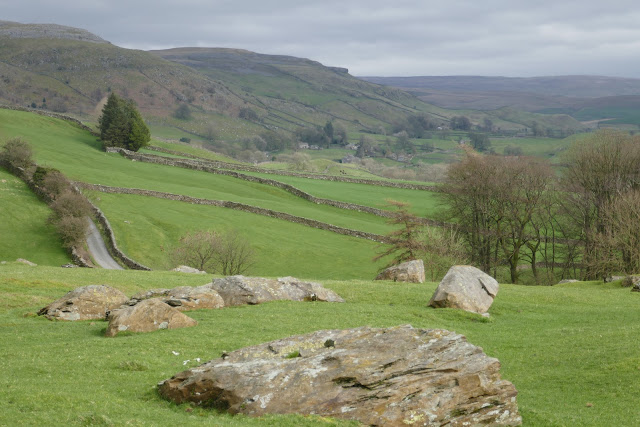 Many lie scattered on the emerald green turf.  This view looks eastwards along the line of the North Craven Fault, with all the land to the left having been lifted in relation to the 'downthrow' on the right, effectively exposing this wonderful slice of undulating basement.  Let's have a closer look at this baffling series of rocks ... 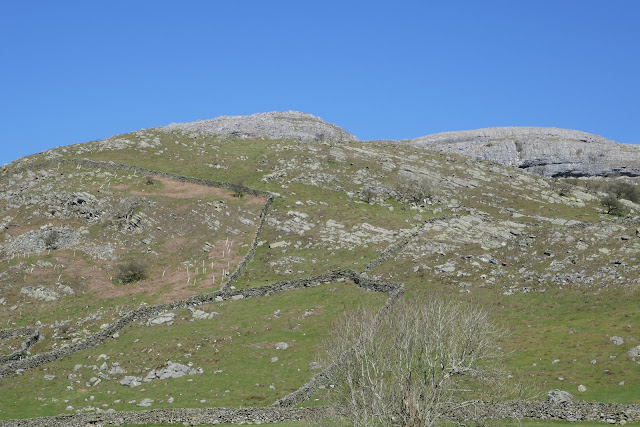 The 'rollercoaster' nature of the basement can be seen in this image - where the basement rocks here dip from a crest or 'anticline' that was weathered away long before the limestones on the top (visible top right in the picture)  were laid down.  What we are seeing here then, are the stumps of ancient mountains beyond our imagination ... 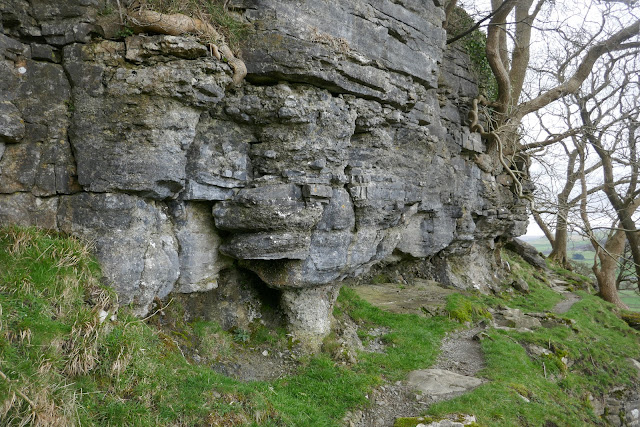 At Nappa Scars (SD 768697) we add detail to the picture.  The cliff is of Great Scar Limestone of course, but the  footpath actually crosses slabs of basement slate, which once lay at a higher level BEFORE the limestone was laid down and are probably the remains of a former landslide onto an ancient beach!!  This isn't the actual basement - as some people think - as we have to scramble down a couple of metres for that. And the beach? Well - it's there for all to see in the form of a band of 'conglomerate' .. you see that pale looking 'mushroom' stem that appears to be holding it all up? ... 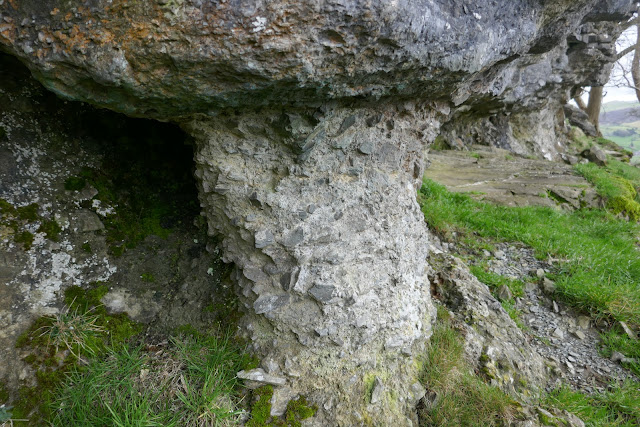 Here it is - a mass of pebbles, shells and bouldery bits all cemented together in a muddy limestone 'matrix'.  It almost appears to be man-made.  We call it conglomerate - and  you can't get a better sample of it than here at Nappa Scars. 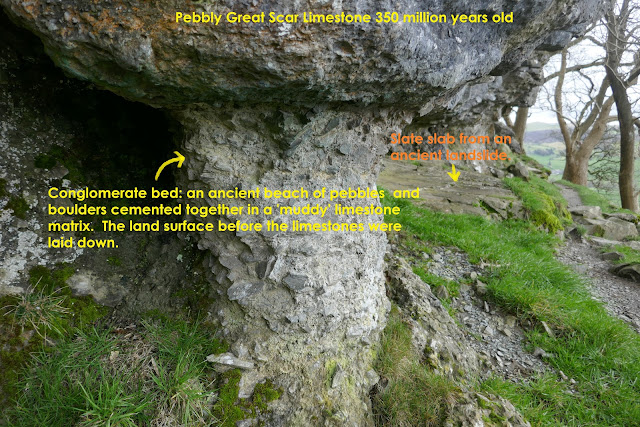 About 350 million years ago, the 'Dales' were south of the equator - and had been dry land for millions of years during the Devonian period.  Rising sea levels saw every bit of the land becoming a beach for a period as the waters gradually invaded ... 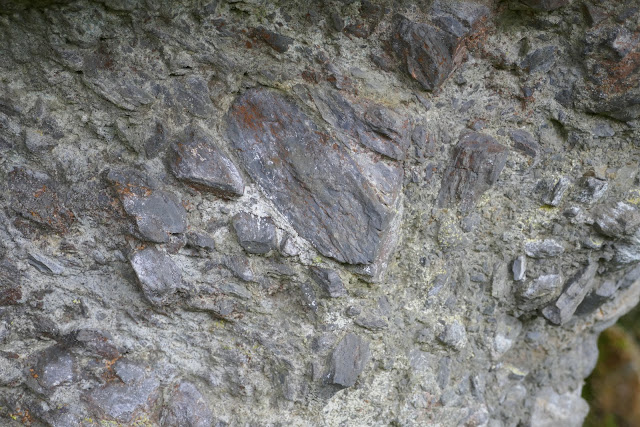 That's what we see here.  Shallow water, allowing shelly organisms to flourish - caused a muddy mixure of their remains to cement the beach material together ... 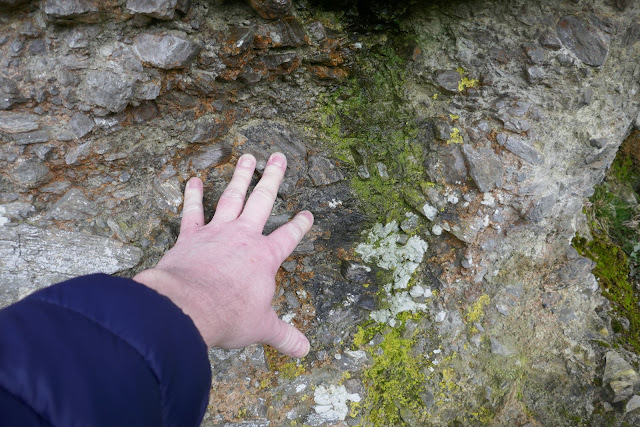 It's amazing to touch it and consider that - it really is! 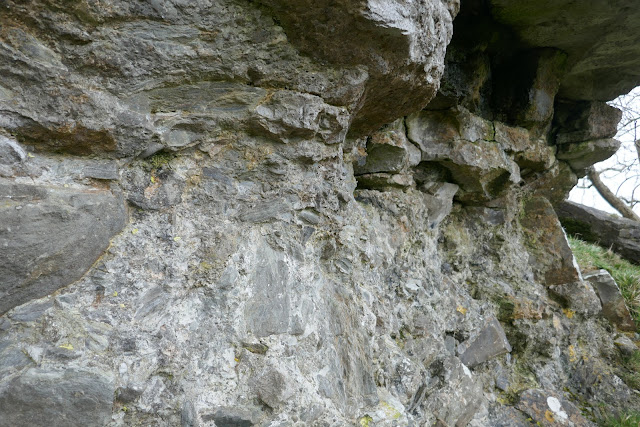 As the waters deepened, the conglomerate gradually gave way to limestone - as bed after bed of shelly creatures deposited their remains on the sea floor.  You can see the gradual 'fade out' to limestone in this picture. 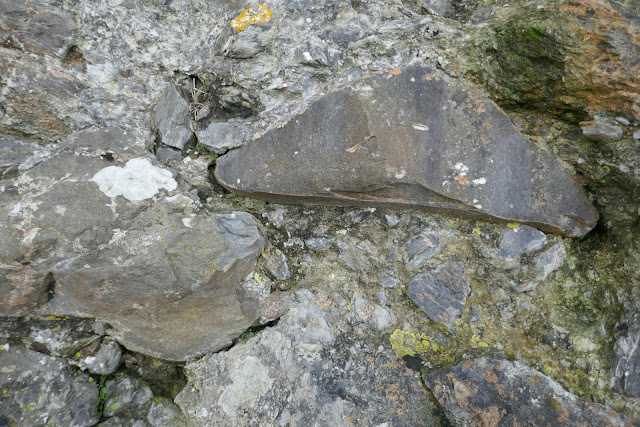 There are some pretty hefty pieces of rock cemented into the conglomerate. 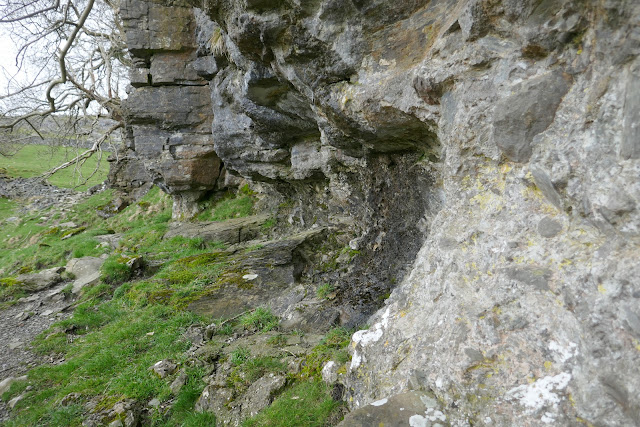 Here's a classic view of Nappa Scars - with the conglomerate bed being very slowly weathered beneath the limestone. 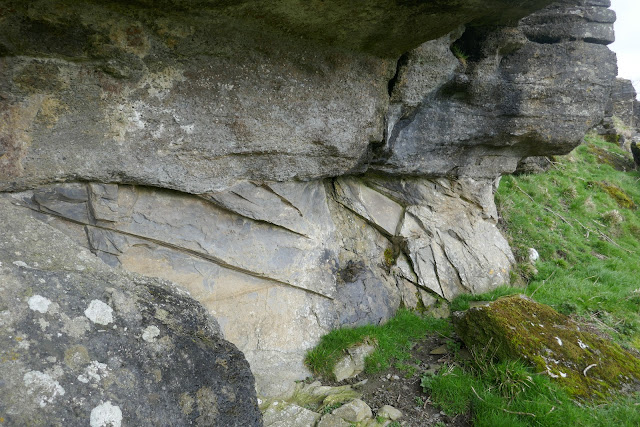 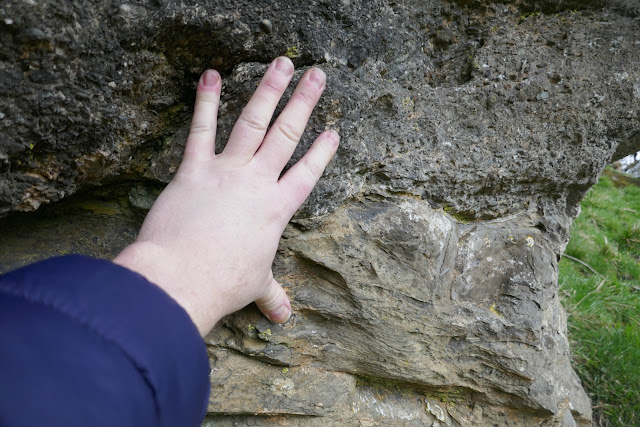 Let's touch the time gap.  What's a human life span - or even human life on earth in comparison to this? 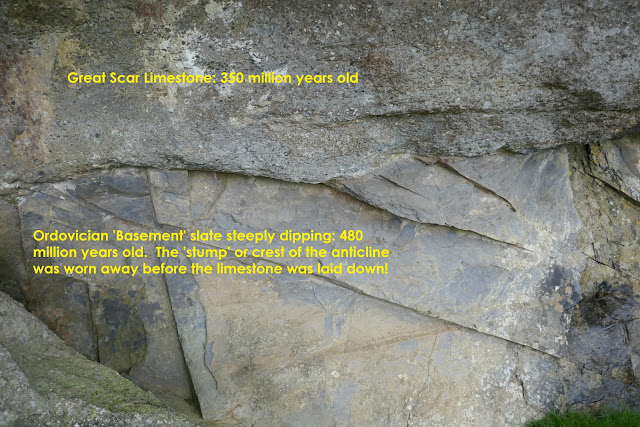 Even on this picture - the steeply dipping beds of a former mountain range can be clearly seen! 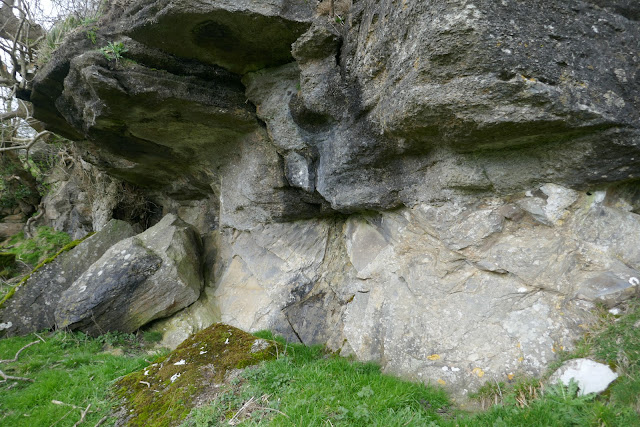 You can see that the limestone - above right - is still at this stage very pebbly ... 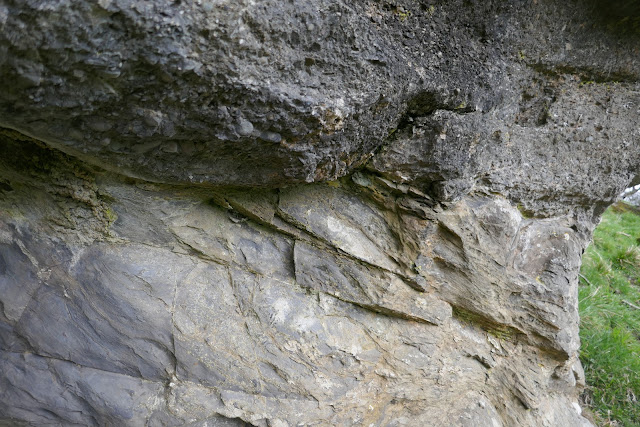 Why is there less conglomerate here? Well - because the limetone was probably deposited on a rocky shelf free of debris at this spot ... 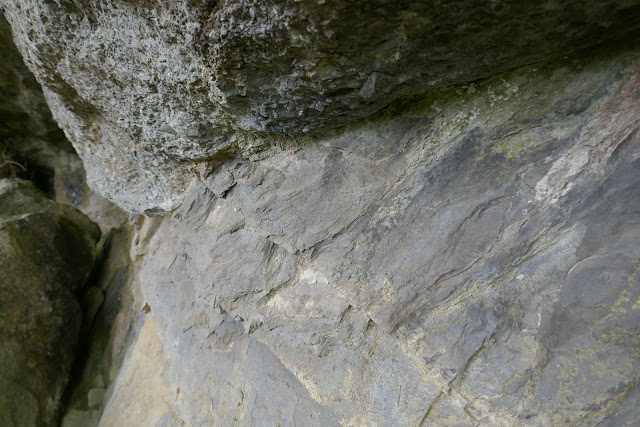 The steeply dipping beds of the basement - caused by the folding as two continents came together to close the Iapetus Ocean ... 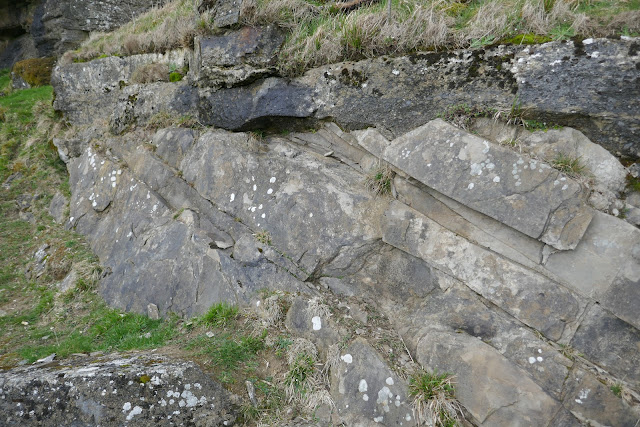 From the crest or mountain top that would have existed beyond the left of the picture (anticline) - the beds would have plunged into the dip (sincline) now lying beneath Crummackdale (to the right). 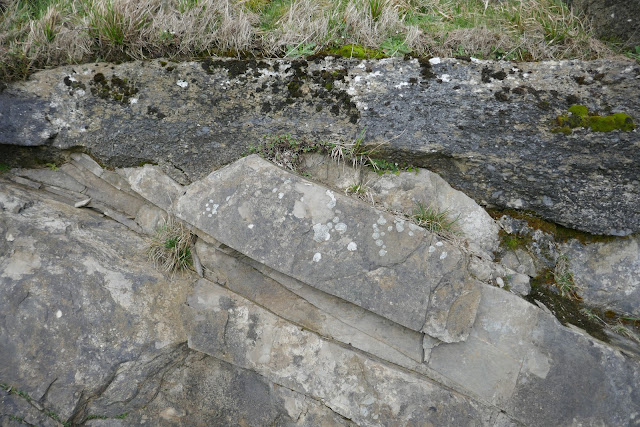 Another view of the unconformity - with the pebbly beds of limestone above. 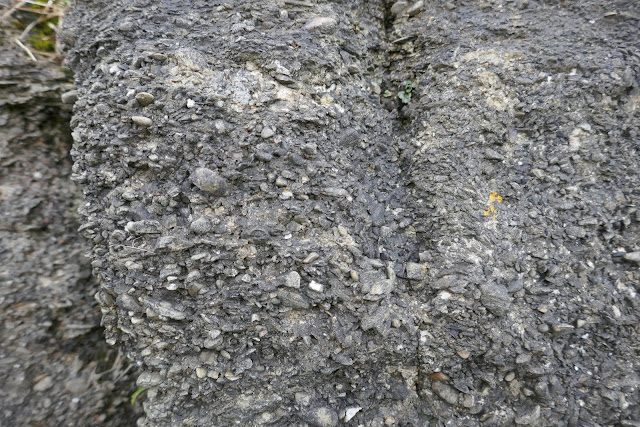 Many gastropods and other fossils can be found in the conglomerate. 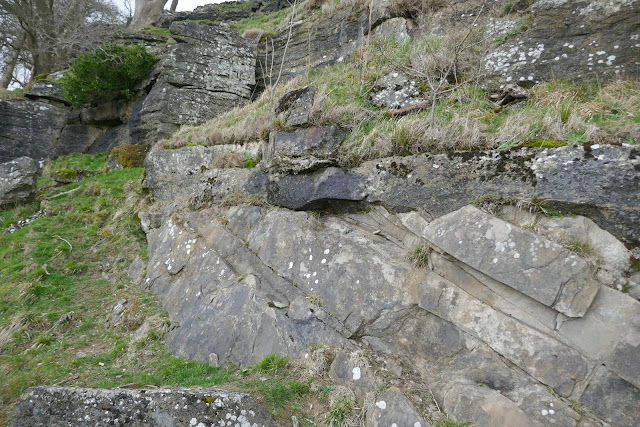 Tearing yourself away from a place like this can be tricky. 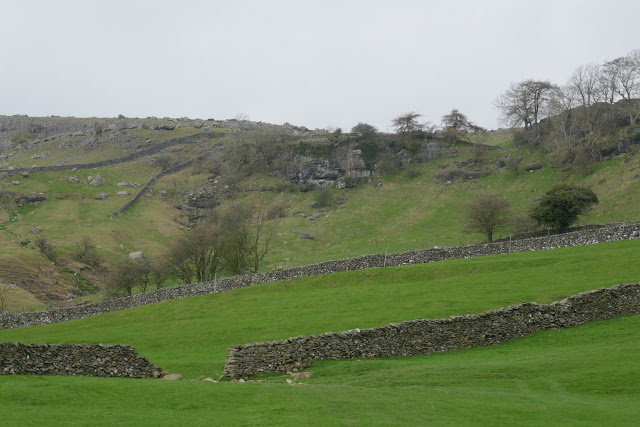 What went on along the scars of this hillside makes you question the significance of human life on earth.  It's an awe-inspiring place to sit and ponder it all!