The Kelcow Caves
A Place for Skulls 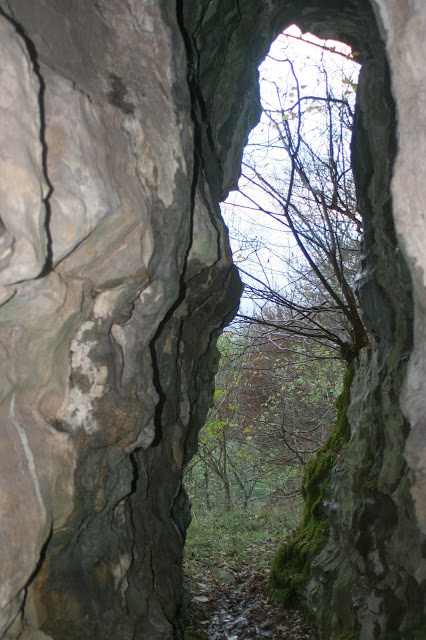 Looking out of the Greater Kelcow Cave, Giggleswick Scar 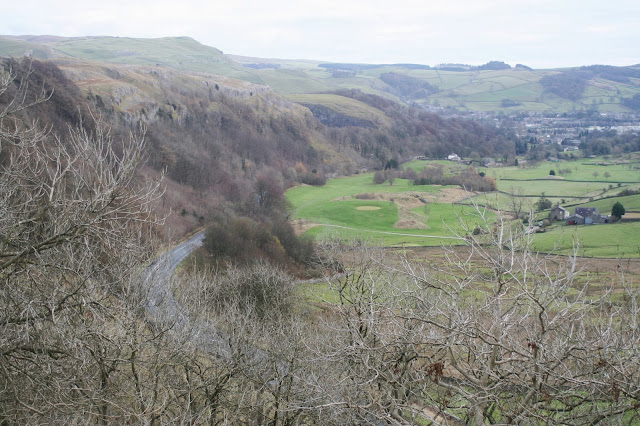 Giggleswick Scar is a massive wedge of Great Scar Limestone, lifted to prominence millions of years ago along the line of a colossal earth fracture - the South Craven Fault.  Driving along its base towards Clapham, the tree-clothed limestone cliffs dominate the right hand side, while on the left the same limestones have slipped along the fault and now lie hundreds of feet below the Settle golf course.  It is dramatic scenery - and despite the quarrying that has now thankfully ceased - its history and geology remain exposed for all to see.  Two of the many caves in the scar that have been lucky to survive are the Kelcow Caves - yards away from the ugly scar of the quarry but stubbornly resistant to man's destruction.  Long may they remain.  These two caves combine to tell the story of the past as well as any in the Dales. 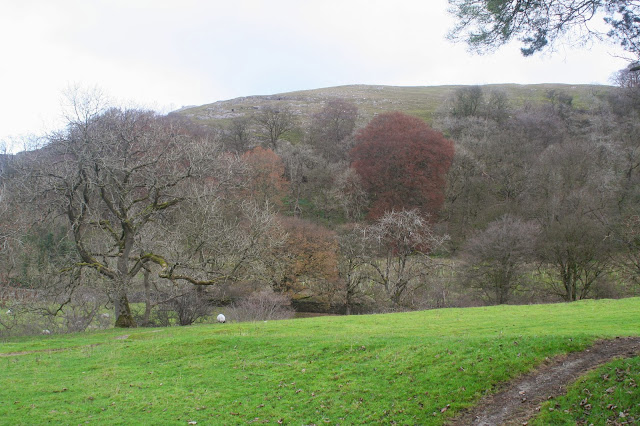 The gaping entrance to Lesser Kelcow Cave can be glimpsed among the trees in winter, once the leaves have shed.  Greater Kelcow is hidden by trees to its right. 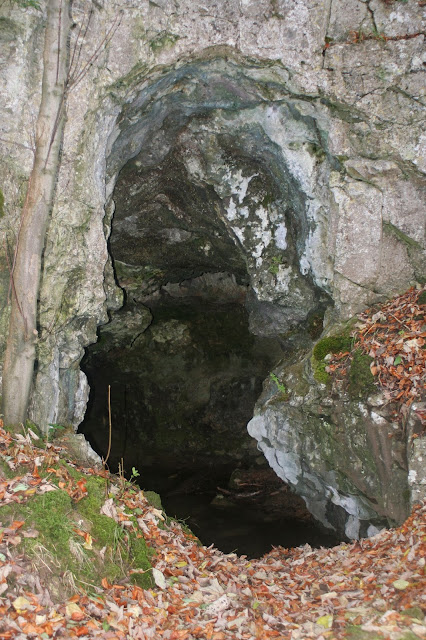 A gate by the busy main road (SD808657) gives access to the ancient woodland containing the caves, which are well worth a visit and require nothing but a good torch and wellingtons. A slippery scramble up through brambles and ferns leads to the prominent entrance of Lesser Kelcow Cave.  Until excavations beginning in the 19th century, the entrance was largely blocked by sediment - and this hid a wealth of archaeological material. 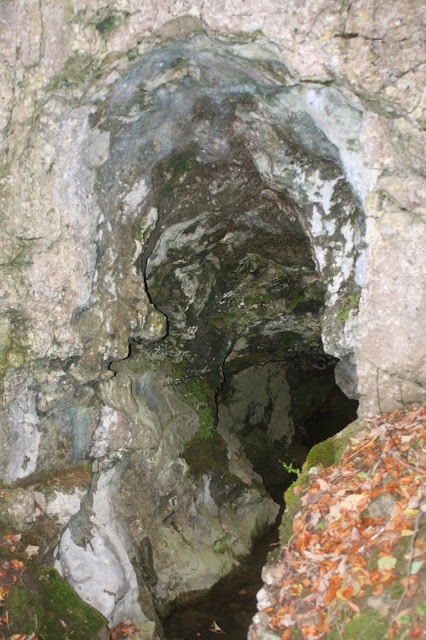 Lesser Kelcow Cave was found to contain the bones of many animals: horse, cattle, deer, domestic pig, sheep, hare, rabbit, fox, badger and small rodents - but these caves are famous for the Romano-British material deposited here during the Iron Age - and even more so for the early Neolithic skulls that were placed here in some numbers.  The skulls discovered were in perfect condition and not weathered, suggesting that the heads were left here soon after death. 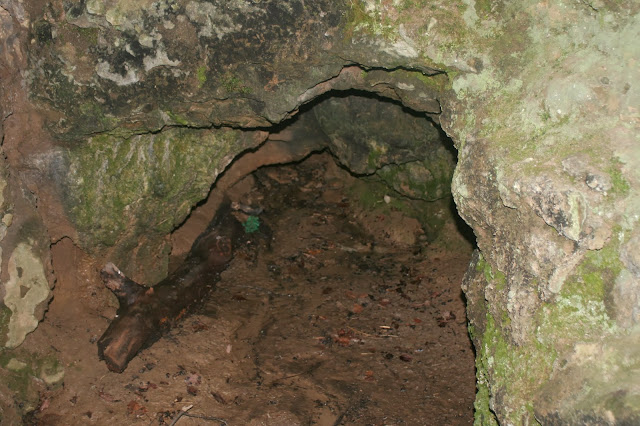 In this chamber, at the back of Lesser Kelcow Cave - a woman's skull was found in the cave sediment and dated to between 3650 and 3522 BC!!  After intitial excavations in the 19th century, the caves were throughly examined by Tot Lord and the Pigyard Club in the 1930s. Many of the finds are now in the Craven Museum at Skipton. 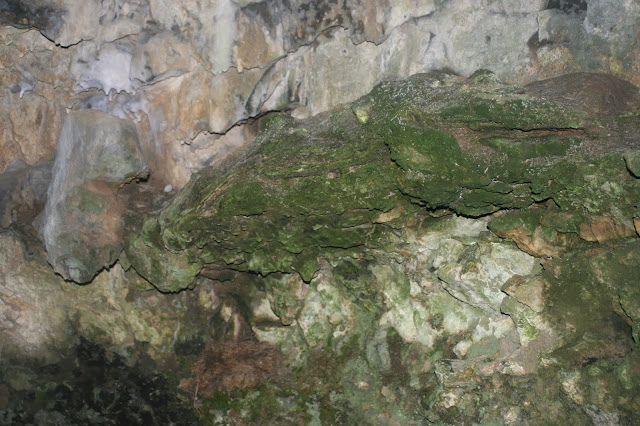 Many of the objects discovered were tucked away on the natural shelves of the cave.  This formation I call 'The Frog Chorus' - and with good reason!  Fragments of Peterborough Ware pottery have also been found here. 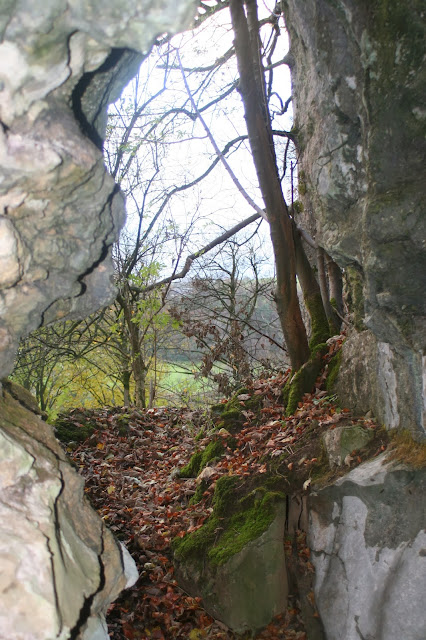 Looking out of Lesser Kelcow Cave.  It is likely that many of the horses and deer were 'poached' - or killed in secret - centuries ago in these wild woodlands, and the caves would have been convenient to store away and deal with the carcasses.  In many of the Settle Caves, horse and cattle bones show teeth marks suggesting they have been scavenged by wolves - and many of the bones have been smashed for marrow.  It is not known why isolated human skulls were placed in caves, but many bones found around Settle have revealed deformities - as though ancient peoples felt those with disabilities had 'malign souls' and therefore were given 'deviant burials' in the dark underworld.  There is still much to learn about the past here. 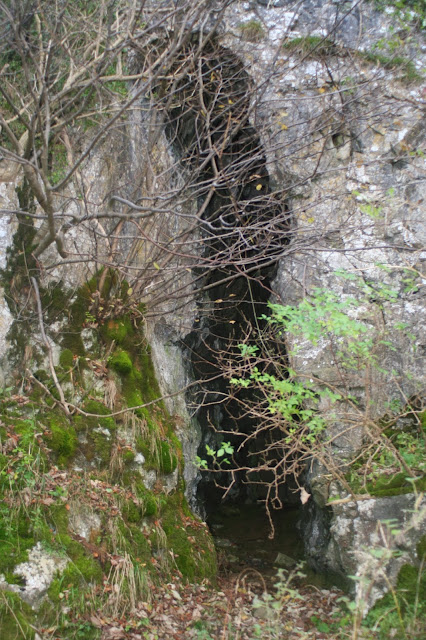 Tucked away to the right is Greater Kelcow Cave with its narrow, tapering entrance.  It is not obvious from the base of the scar and needs a careful search.  This cave is perfectly safe even for children to enter with a torch - but as with all caves it should be treated with respect.  The moonmilk coating the walls should be left undisturbed - as should the masses of moths and cave spiders - enough to keep the squeamish at the outside! 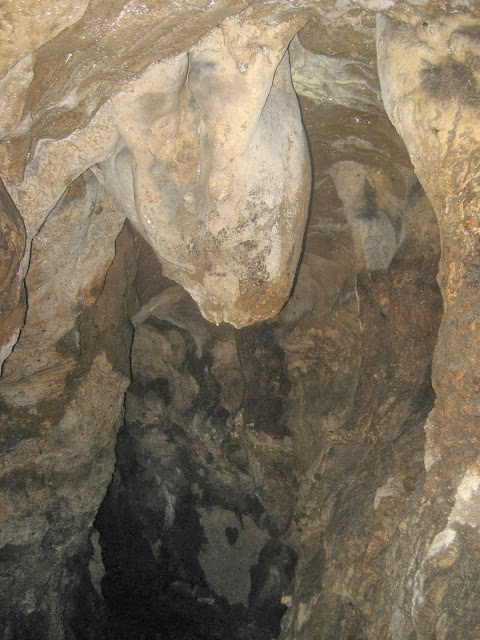 This cave has been fully investigated and has revealed an amazing wealth of objects.  Bones of the usual vertebrates along with lynx and bear have been discovered here.  Human remains included an isolated femur that had been culturally smashed ... 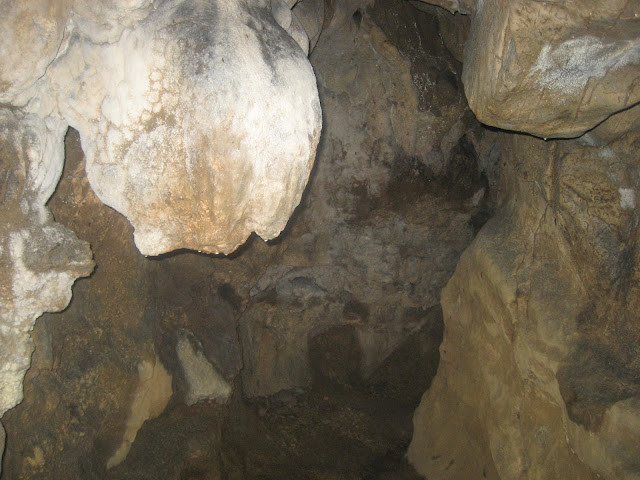 Greater Kelcow Cave was a depository for objects during the Romano-British period - probably before the main Roman invasion reached the north.  A number of exquisite brooches were discovered here, along with a superb Iron Age spearhead now in the Craven museum.  The chain and handle of a cooking pot from the same period were also notable finds.  Discoveries from later periods include pottery and even an 18th century Jew's Harp. 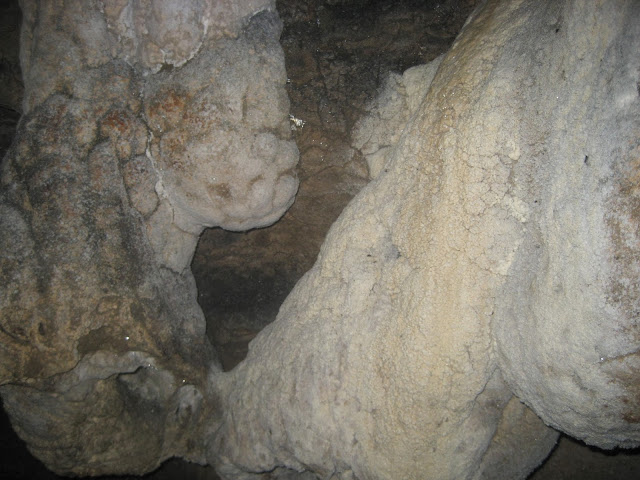 These wonderfully sculptured, moonmilk-coated features I call the 'White Horses.' 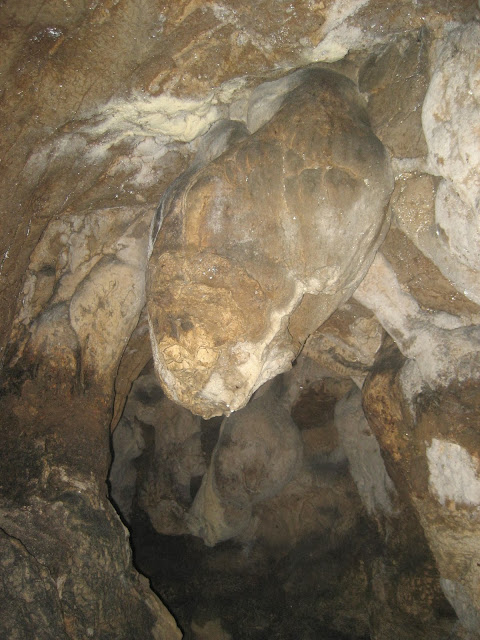 Amazing to think that early man would have looked up and wondered at the strangeness of this dangling feature - just as we do today. 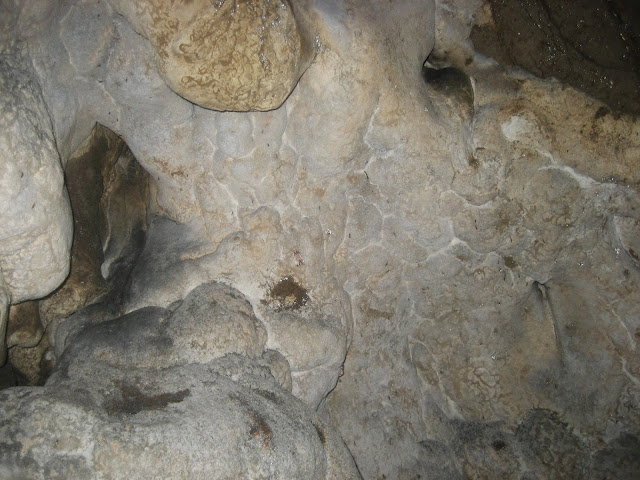 The attractive moonmilk ceiling in Greater Kelcow Cave.  The origins of moonmilk are unclear, but bacteria is believed to be involved in its formation. 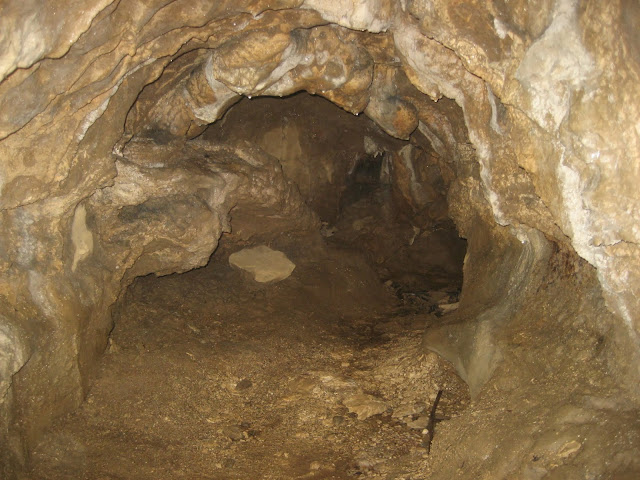 The chamber and soft floor deposits at the back of Greater Kelcow Cave.  A narrow crawl lies beyond.  These deposits are delicate and best left undisturbed. 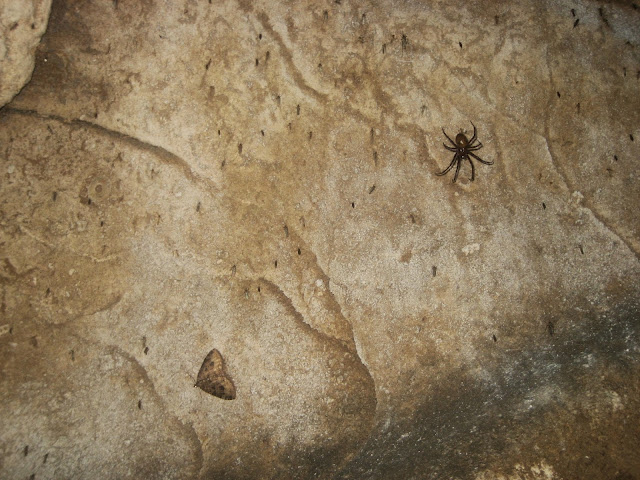 Arachnophobes are unlikey to enjoy the Kelcow Caves.  Everywhere you turn, the eight beady eyes of the cave spider - Meta menardi are upon you - and torchlight results in cryptic movements.  Those with a fear of moths will have a double nightmare!  Here, a Tissue Moth Triphosa dubitata keeps a safe distance, between scores of insects. 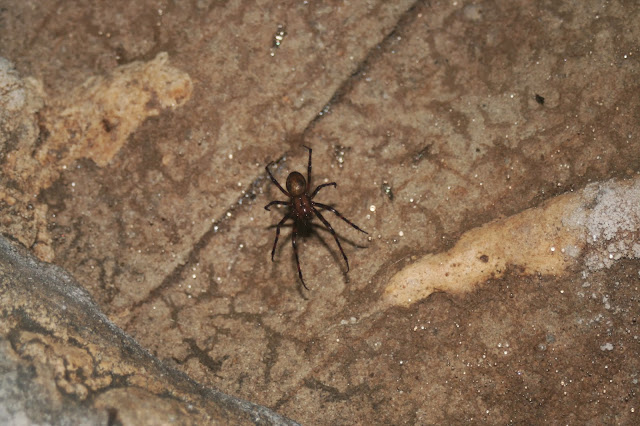 Close up of the cave spider.  These fellas shun the light, though their spiderlings actually are attracted by it - a factor which probably helps the spiders to move and colonise other caves and buildings. 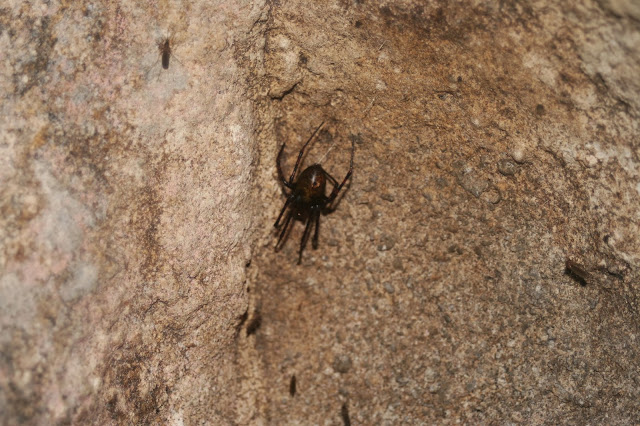 This dominant lady is spinning as she hunts.  Don't mess! 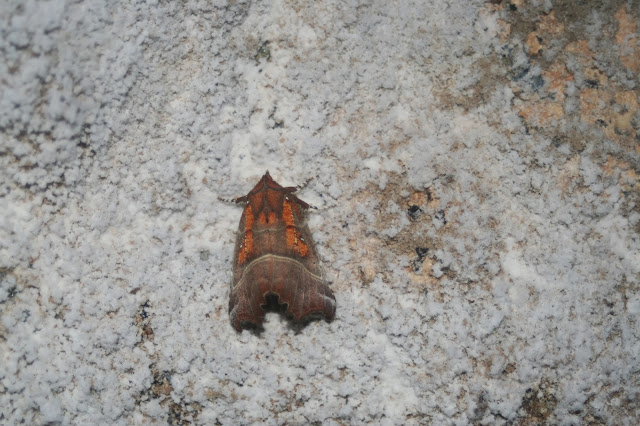 The beautiful Herald Moth Scoliopteryx libatrix overwinters in Greater Kelcow Cave.  Set against a background of snowy white moonmilk, it is a stunning sight. 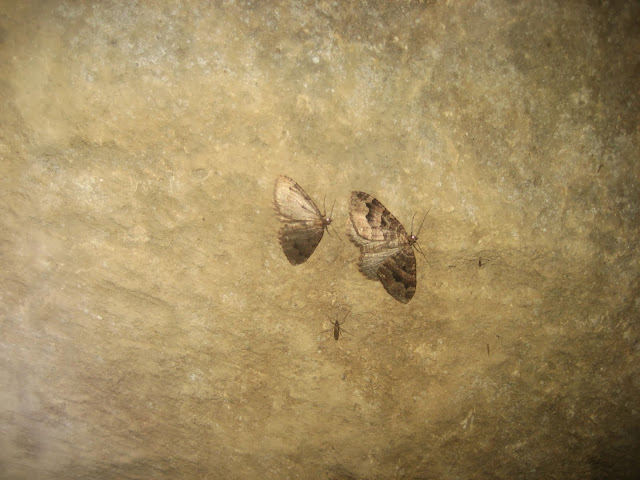 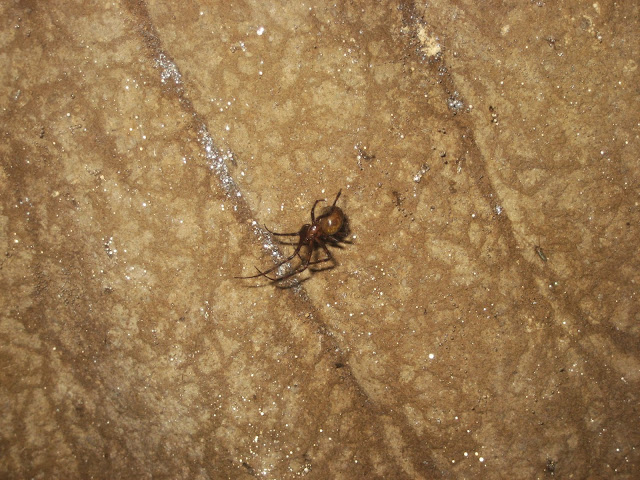 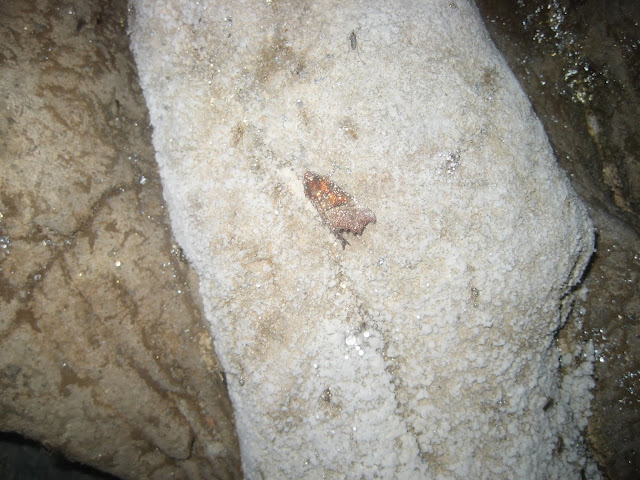 This Herald Moth has been lying still so long - she's coated in moonmilk herself, as lime rich water has been dripping onto her wings. 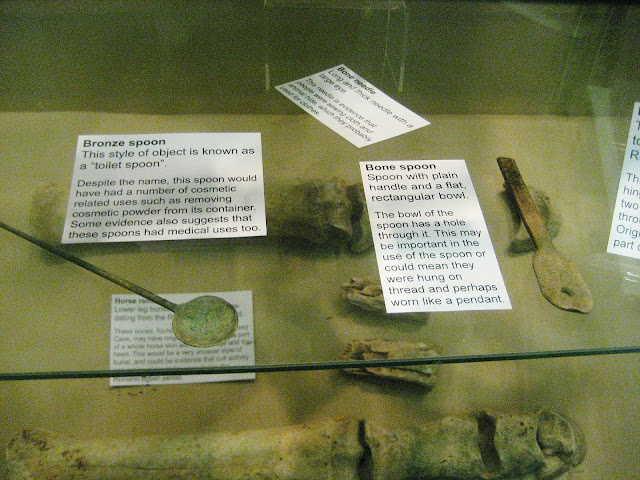 Romano-British objects, with horse bones beneath - found in the Kelcow Caves and on display in the Craven Museum. 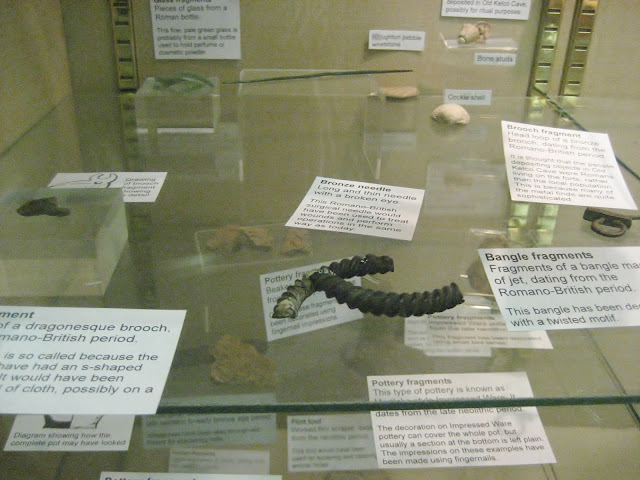 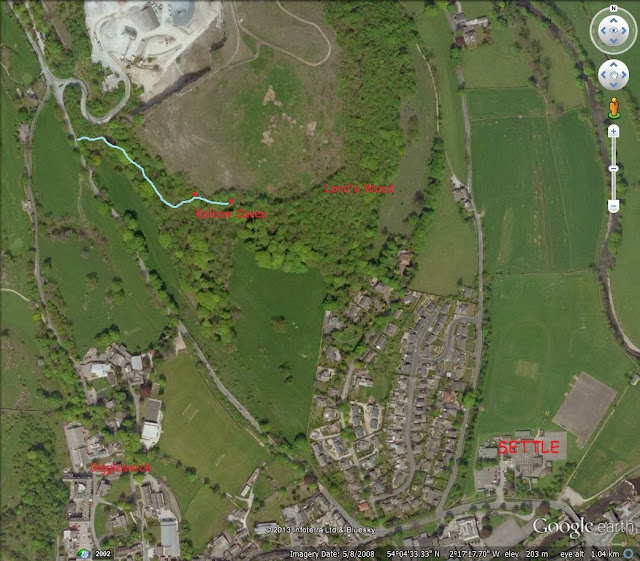 This aerial view shows the proximity of the Kelcow Caves to the quarry, which is now being left to nature, and should be an important wildlife habitat itself in a few years.  Please respect the site and its delicate woodlands - leave no litter or disturbance.  These posts are to encourage those with a love of wild places.  I have removed bags of bottles and litter from Dales caves on many occasions and wouldn't want to encourage this type of person.   Giggleswick Scar is one amazing place and I'll be visiting its other delights over the next few weeks.

Posted by Stephen Oldfield at 03:02